SUPERMARKETS are still charging shoppers up to 80p more for loose fruit and vegetables compared to ones wrapped in plastic, despite promises to crackdown.

We ran an online price comparison that showed customers are still being penalised for making environmentally friendlier choices at Britain's biggest supermarkets. 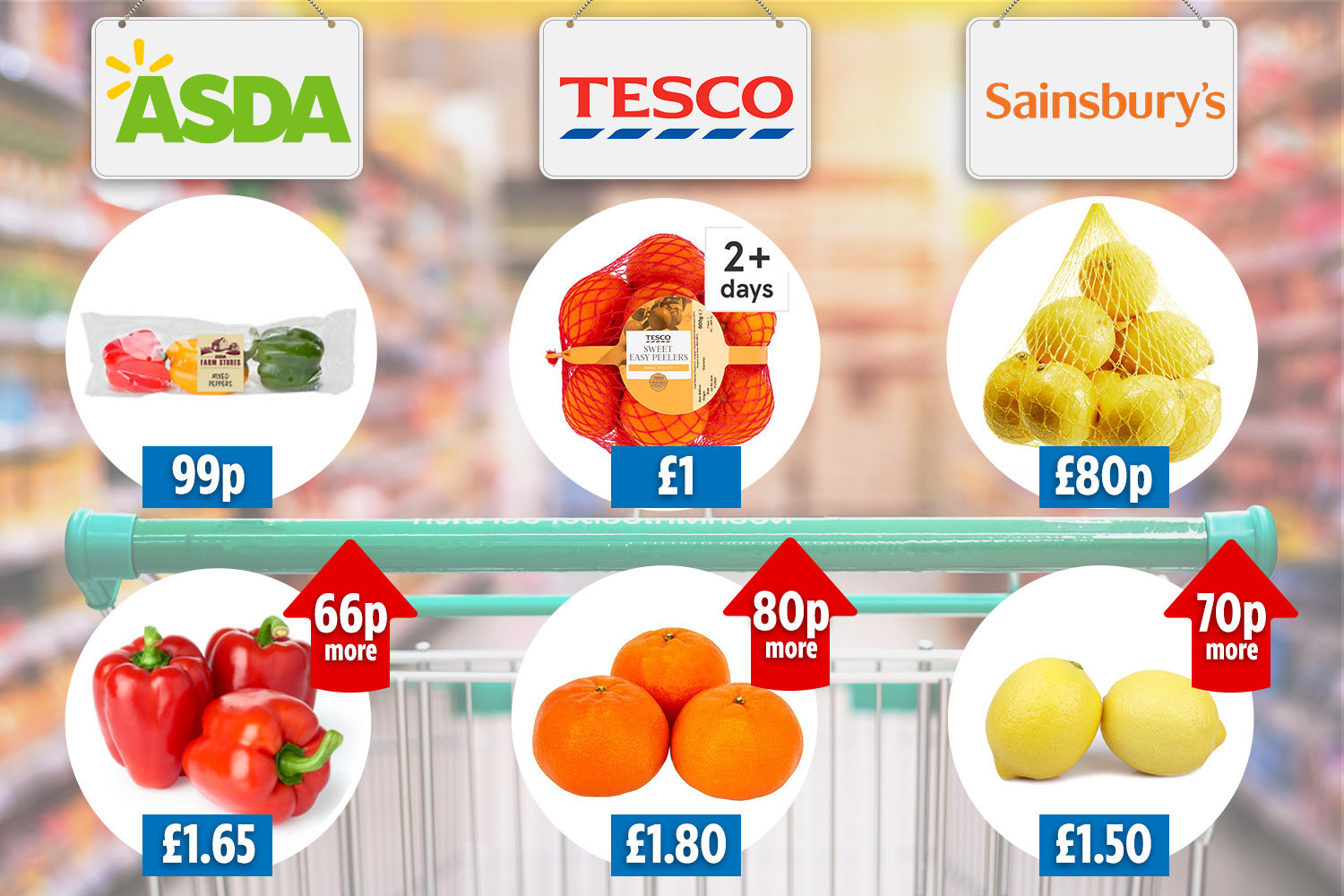 We looked at the cost of 10 random packaged fresh produce at Asda, Morrisons, Sainsbury's and Tesco and compared them to the price of loose ones.

Discounters Lidl and and Aldi were excluded from the comparison because neither store offers a delivery service on groceries.

In cases where supermarkets offer customers a choice of paying per item or per kilogram, we opted for per item to reflect the same number that come in the plastic packaging.

Our investigation found that just 39 per cent of products are cheaper to buy loose. 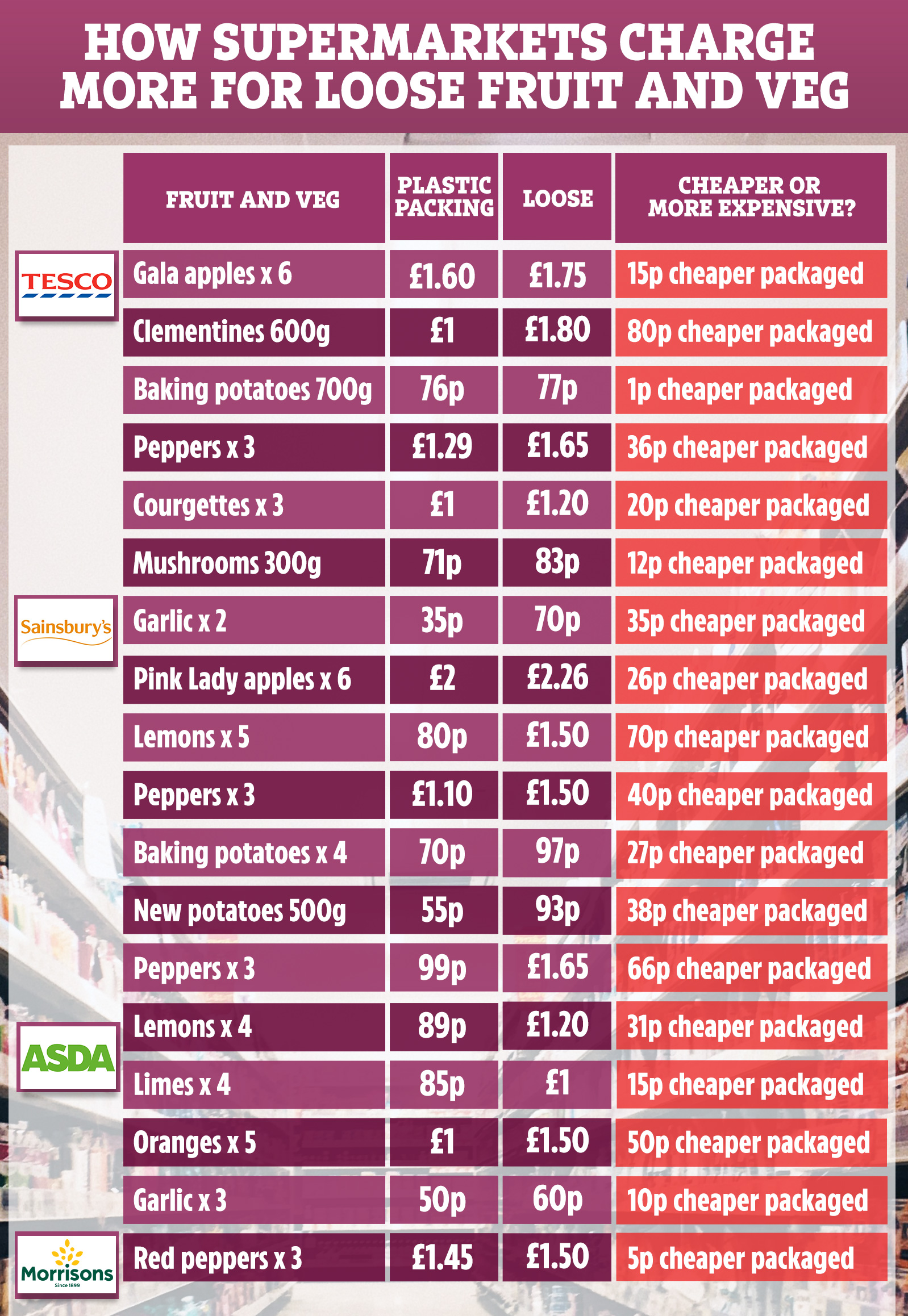 Only three products turned out to be cheaper at Asda, and only one, a kilogram of onions, where the price was the same.

Less than half of Tesco's fruit and veg was cheaper to buy loose, while it was 50/50 at Sainsbury's.

Meanwhile Morrisons only offers online shoppers the choice to buy peppers loose or packaged – and a pack of three were 5p more expensive to buy free of plastic.

The biggest price difference was found at Tesco, where shoppers are charged 80p more for 600g worth of clementines if they choose to ditch the plastic netting.

Peppers are also cheaper to buy when they're wrapped in plastic, by up to 36p when you purchase three.

But still, we found that a pack of five lemons were 70p cheaper to buy in the plastic mesh netting which cost 80p compared to loose ones that cost £1.50.

Meanwhile, Asda charges £1.65 for three loose peppers and 99p for ones that are packaged in plastic.

Here's how to cut the cost of your grocery shop

SAVING on your shop can make a big difference to your wallet. Here are some tips from Hannah Maundrell, editor of Money.co.uk, about how you can cut the cost of your shopping bills:

It's worth noting that some items were cheaper to buy loose.

Shoppers could save up to 54p on five pears by ditching plastic at Sainsbury's, 30p on bananas at Asda and 25p on 500g of leeks at Tesco.

Some supermarkets are tackling the problem of single-use plastics by installing deposit return schemes for plastic bottles or ditching carrier bags, it could do more to reflect this in their fruit and veg prices.

The retailers did point out to The Sun produce in packaging is often different sizes to the ones that are loose and are not directly comparable.

A spokesperson for the British Retail Consortium, which represents retailers, said: "Packaged fruit and vegetables can sometimes be cheaper because products are bought in bulk and there's less handling and waste involved."

A Sainsbury’s spokesman said: "The majority of our loose fruit and vegetables are already cheaper than the comparable packaged product and we will continue to look at where we can make further reductions."

A spokesperson for Tesco said it removed plastic packing where possible, unless it helps stop food waste when it will look at using recyclable materials.

They added: "The price of packaged and loose produce can vary depending on a number of factors, such as, the variety, specification, operational, handling and waste costs."

The Sun has contacted Asda and Morrisons for comment.

MoneySavingExpert ran a similar study last year where it found that shoppers were paying up to 54 per cent more to buy fresh produce plastic-free.

These Memes Of Bernie Sanders At The 2021 Inauguration Are Hype For His Practical Outfit
We and our partners use cookies on this site to improve our service, perform analytics, personalize advertising, measure advertising performance, and remember website preferences.Ok