Australia’s warships will be able to dock at a new $1 billion maintenance centre in Sydney as part of a commitment by the Morrison government to establish four new strategic bases around the country.

The Sydney Morning Herald and The Age can reveal a tender is being released on Wednesday to establish a naval maintenance centre at the Garden Island defence precinct in Sydney. 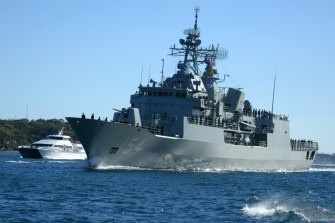 Along with the naval maintenance centre in Sydney, three others will be established in Cairns, Darwin and Henderson in Western Australia.

They will help sustain and maintain Australian warships including the three Hobart class destroyers and HMAS Choules, a Bay-class landing ship dock.

Other ships such as the Canberra class Landing Helicopter Dock ships and their landing craft, the Supply class auxiliary oiler and two Anzac class frigates could also be repaired at the sites.

Defence Minister Peter Dutton said the investment was part of the government’s “continuous naval shipbuilding” program and the imminent release of a request for tender was a significant opportunity for industry in the Sydney region.

He claimed Australia has now recovered from the “valley of death” in Australia’s shipbuilding program that occurred under the previous Labor government.

“This new approach aims to mitigate the ‘boom and bust cycle’ by providing long-term work
packages and removing barriers to entry for small and medium enterprises,” he said.

“By adopting this new approach, the Morrison government is opening up opportunities for
local small and medium enterprises to be involved in building our sovereign defence
industry and reducing administration for the workforce, making it easier to do business with
Defence.”

The maintenance centre will be operational by mid-2024.

In his appearance at the National Press Club in Canberra on Wednesday, Joyce said a Coalition government would “within the first six months after the election, introduce measures to increase Australia’s merchant capacity”.

Australia only has 13 large ships as part of its Australian-flagged merchant fleet.

Joyce said the government, if re-elected, will review income tax exemptions with ship owners to ensure they can compete, and explore other changes, including lower thresholds for hiring foreign workers.

Following the controversial security deal being signed between China and Solomon Islands, Joyce warned the threat posed by China in the region was the same island-hopping tactic used by Japan in World War II.

“China is now utilising the same tactical positioning and it is imperative in this campaign that the Australian people are fully aware of this. It is not alarmism. It is a reality, and we have to be awake to it,” Joyce said.

“It is quite obvious through their desire to have military bases, they are starting a process of encircling Australia and there is a wish, at the very least, to intimidate or to supplicate Australia.

“Australia has a maritime vulnerability. We are surrounded by sea. If you can stop imports and exports into Australia, you can stop Australia.”