The stage adaptation of Moulin Rouge has made history, becoming the first Australian production to win a Tony Award for best musical.

Moulin Rouge! The Musical – based on Baz Luhrmann’s 2001 film and due to open in Australia this year – swept the Tony Awards held on Sunday in New York, winning 10 awards including those for best musical, best director, best actor and best choreography.

Australian producer Carmen Pavlovic said it was an honour to bring the masterpiece of fellow Australians Baz Luhrmann and Catherine Martin to the stage. The musical, produced by Global Creatures, received 14 nominations, the most an Australian production company has received in the history of the prestigious theatrical awards. 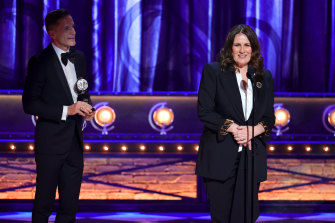 “I feel that every show of last season deserves to be thought of as the best musical,” Pavlovic said in her acceptance speech at Broadway’s Winter Garden Theatre.

“The shows that opened, the shows that closed, not to return, the shows that nearly opened and of course the shows that paused and are fortunate enough to be reborn. Best musical is all those shows. Best is what we’ve had to find in ourselves as we’ve walked this unimaginable journey and carried our shows across the desert. ‘Best’ is what we know we need to become as we reimagine the Broadway of the future.”

Des Flanagan, who plays the male lead role of Christian in the Australian production, said the cast had communicated throughout the Tonys telecast and they were filled with pride for the bumper number of awards won. The awards ceremony featured an electrifying performance of the musical’s opening medley, beginning with Lady Marmalade.

“If the anticipation was not high enough already, this shows the Melbourne public the calibre of this show that’s about to hit the Regent Theatre,” Flanagan said. “The ticket to Moulin Rouge is really hot now.”

The show is the first production Sydney-based Global Creatures has fully developed outside Australia following productions of Strictly Ballroom, Muriel’s Wedding and King Kong, which also had a short run on Broadway. 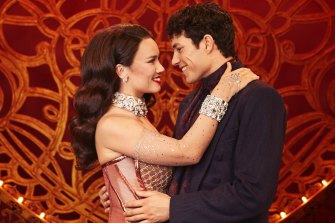 The Moulin Rouge winners included Danny Burstein, who celebrated his first win in seven trys, claiming best featured actor for his turn as impresario Harold Zidler. He was hospitalised with COVID-19 in 2020 and his wife died in December; he thanked the Broadway community for having “showed up for us”. Aaron Tveit was the only nominee in the best leading actor in a musical category and “managed to triumph over the complete lack of other nominees”, as Variety put it.

Moulin Rouge’s wins more than double the best Tony Awards success of other Australian productions. The 1996 Broadway production of The King and I, produced by John Frost, won four Tonys; the 2004 Broadway transfer of The Boy From Oz earned five nominations, including a win for Hugh Jackman for his turn as Peter Allen; Priscilla Queen of the Desert The Musical earned two nominations and won one; and King Kong earned three nominations plus a special Tony Award for Sonny Tilders who designed the creature.

The show hopes to open at Melbourne’s Regent Theatre on Collins Street in November, subject to Victoria reaching the 80 per cent vaccine threshold and a government green light to open at a minimum of 50 per cent capacity. At present, the cast is on pause but are still in constant contact.

“We’re all itching to go,” he said. “If I start thinking about how proud I am of this show, I’ll probably start crying. I didn’t quite anticipate how much this show means to me and what it will mean to the general public. It will be such a release for people, as a celebration of beautiful themes that will shed some of the shell from the people of Melbourne.”

Jagged Little Pill, which is inspired by Alanis Morissette’s 1995 album of the same name and will open at Sydney’s Theatre Royal on December 2, also won two awards for best book and best supporting actress.

Australian co-producer Torben Brookman said the show was only open for a month on Broadway before the pandemic forced its closure in March 2020.

“People don’t necessarily know much about the show here so winning those Tonys and just having 15 nominations creates a new level of awareness,” Brookman said. “It’s fantastic for the show.”

The US production has been marked by controversies after a former cast member said producers forced them to delay a surgical procedure, and following criticism about a character’s gender identity.

“We’re acutely aware of providing a safe workplace and it’s always been important to us,” he said. “The ways in which we can manage that and create that culture of inclusivity is something we treat with the highest level of awareness with all our shows and particularly a show like Jagged Little Pill, which deals with a number of sensitive issues.”