The street artist Banksy has launched a bid to protect some of his most famous art from being copied and commercially exploited in Australia – however he is using a legal tactic that failed in a European court.

Banksy applied via a Perth law firm to register two images as trademarks in this country. The applications have been accepted and they will be registered next week, barring any last-minute challenge.

The trademarks apply to the use of the images on a huge range of goods including posters, handbags, umbrellas, bedsheets, clothing, rugs and many more. 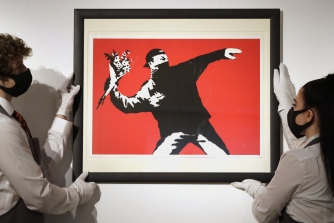 Gallery technicians display a Banksy called Love is in the Air.Credit:AP Photo/Kirsty Wigglesworth

However, the trademarks may not give the artist the protection he hopes for: last week a European Union court cancelled four trademarks on Banksy works, in a highly critical judgement that found the artist had filed them in bad faith. And last year it cancelled an EU trademark identical to the one sought in Australia.

Lawyer Tim Golder, an intellectual property specialist at Allens in Melbourne, said if Banksy wanted to remain anonymous he could not use copyright law to stop people copying his work for commercial gain. “The legal person who owns the right has to make the claim,” he said. “You can’t get out of that.” 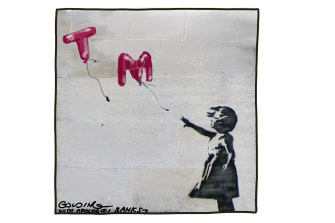 Banksy has launched a bid to protect some of his most famous art from being copied and commercially exploited in Australia.Credit:Matt Golding

Mr Golder said trying to assert ownership of an artistic design by a trademark instead was “trying to fit a square peg in a round hole”. Even if it was registered, that might not stop people from copying it and selling it on posters or merchandise.

“He’s got himself in a bit of a corner,” Mr Golder said. “If you take somebody’s artwork and you slam it on the front of a greeting card you’re not using that as a trademark.”

One of the images about to be registered in Australia is Love is In the Air, also known as Flower Bomber or Flower Thrower: his stencil of a masked man throwing a bouquet of flowers as if it were a rock in a riot. A print of this work set an Australian auction record in May when an unidentified American bidder paid $184,091 for a signed original planted by Banksy in the Museum of Contemporary Art shop.

The other is his Girl with Balloon, a symbol of lost innocence that has appeared around the world and most recently made headlines when a painting was partially shredded at Sotheby’s auction house, moments after a bidder bought it for more than £1 million.

According to IP Australia, the federal agency that administers Australia’s intellectual property rights system, Banksy’s London-based company Pest Control Office Ltd applied for trademarks on the two images in July 2019, and they were accepted at the end of April 2021. The two-month period for filing an objection expires on June 29.

The application was made via Perth law firm Bennett & Co. David Stewart, a principal at the firm, said he was not in a position to comment on the application.

Last week a European intellectual property court cancelled four Banksy trademarks over his artworks, in a legal sequel to a similar judgement last September over the Flower Bomber work.

The court found the artist had applied in bad faith because he never sold any goods related to the trademark until he set up a store called Gross Domestic Product in 2019 which the court said he’d done to “circumvent the law”. The court noted that if he’d tried to assert copyright then “identifying himself would take away from the secretive persona which propels his fame and success”.

The court also noted that in his book Wall and Piece, Banksy said “copyright is for losers”.

A notice at Pest Control Office’s official website said the public was “welcome to use Banksy’s images for non-commercial, personal amusement. Print them out in a colour that matches your curtains, make a card for your gran, submit them as your own homework, whatever”.

However, it added, “Saying ‘Banksy wrote copyright is for losers in his book’ doesn’t give you free rein to misrepresent the artist and commit fraud. We checked.”