Street artist Banksy is highlighting the issue of homelessness with his new holiday-themed artwork in Birmingham, central England.

Two reindeer painted on a brick wall outside appear to carry off a real-life man sleeping on a bench in a video the anonymous artist shared on Instagram.

Check out the clip here:

“God bless Birmingham,” Banksy captioned the post. “In the 20 minutes we filmed Ryan on this bench passers-by gave him a hot drink, two chocolate bars and a lighter – without him ever asking for anything.”

The piece was installed on Vyse Street early Friday by “a couple of lads in high-vis vests” who placed a tent around the bench, according to local jeweler Martin Clarke.

“I thought they were from the council and were just doing a bit of upkeep,” he told The Guardian.

“About half six I looked out the window and the tent had gone as had the lads. Then I saw it,” Clarke said. “I thought it was great. We weren’t sure what it was at first or who did it but we had a good idea.”

Banksy confirmed via his website that he was behind the art installation on Monday, prompting crowds of fans to visit and take photographs.

Barriers were later put up to protect the mural. But at one point, someone “jumped” them and painted the reindeers’ noses red, the BBC reported.

Protective plastic was later placed over the mural, according to the Birmingham Live news website. 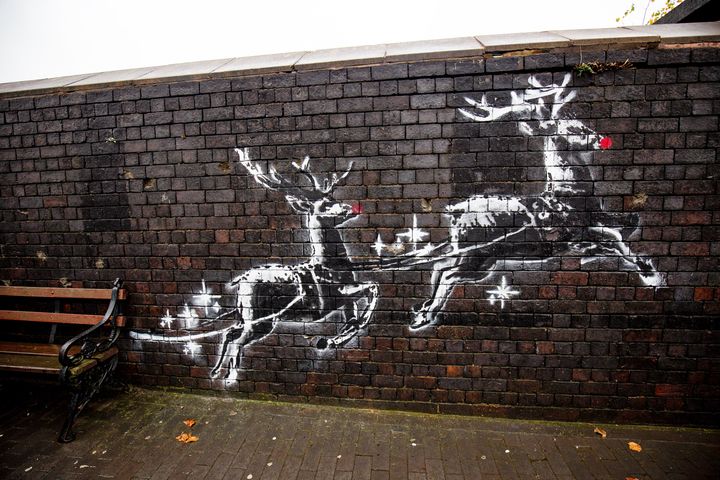 Some Twitter users suggested the unveiling of the piece was timed to highlight homelessness rates in the United Kingdom just days before the country holds a general election.

Shelter, a U.K. housing charity, released a report last week that found 135,000 children in Britain are homeless or living in temporary accommodations, the highest number in 12 years.

Before the 2017 general election, Banksy had urged people to vote against the incumbent Conservatives in exchange for a free print.

He later scrapped the stunt after police investigated a possible breach of the Representation of People Act, which prohibits voters from accepting or agreeing “to accept a gift or similar in return for voting or refraining from voting.”

The new mural also comes a week after Banksy’s former associate, Steve Lazarides, released his new book, “Banksy Captured,” chronicling his 11 years working with the artist as his photographer, driver and agent until 2008.