Bart Starr, the earnest and determined leader of the great Green Bay Packers teams of the 1960s who became one of the most accomplished quarterbacks in history — the in-the-huddle incarnation of their fierce and masterly coach, Vince Lombardi — died on Sunday in Birmingham, Ala. He was 85.

His death was announced by the Packers. He had been in poor health since suffering a stroke in 2014, the team said.

Starr, the son of a strict military man who used to tell him that he wished he were tougher, was an underperforming bench-warmer when Lombardi first arrived in Green Bay in 1959. Like Starr’s father, Lombardi worried, as he later said, that the young man might be “too polite and maybe just a little too self-effacing to be the real bold, tough quarterback that a quarterback must be in the National Football League.”

More than a half-century later, the annual N.F.L. award given to a player, and voted on by players, for outstanding character and leadership on and off the field is called the Bart Starr Award.

Starr’s name may have been the most flamboyant thing about him. But he proved to be skilled, sly and, by at least one measure, incomparably successful: He won four N.F.L. championships (in 1961, ’62, ’65, ’66 and ’67) in the pre-Super Bowl era, and then the first two Super Bowls, in 1967 and ’68. That Packers’ run of three straight N.F.L. championships helped bring new attention to professional football as it moved into the Super Bowl era. (With his victory in 2019, Tom Brady has won six Super Bowls with the New England Patriots.)

Starr was named the league’s most valuable player in 1966 and received the same honor in Super Bowls I and II. He was selected to the Pro Bowl four times. And on a team known for running — with the flashy Paul Hornung and the rugged Jim Taylor (who died in October) — Starr was one of the league’s most efficient passers. He led the N.F.L. in that crucial category in three seasons and, on average, for all of the 1960s — even though his rival Johnny Unitas of the Baltimore Colts was often viewed as better. Starr set career records for completion percentage, 57.4, and consecutive passes without an interception, 294.

Those records were eventually broken in a league transformed by precision-passing offenses and increasingly coddled quarterbacks, many groomed since childhood and arriving at the annual N.F.L. draft as celebrities. Starr, by contrast, was drafted in the 17th round in 1956 after barely playing his senior year at Alabama, and he may not have been the most talented player on the Packers during their glory years. Many teammates from that era — including Hornung, Taylor, Willie Davis, Forrest Gregg, Jerry Kramer and Ray Nitschke — are in the Hall of Fame. (Gregg died in April.)

Yet Starr became the Packers’ most essential player. Lombardi was a new kind of coach — comprehensive, obsessive, relentless — and he needed a new kind of quarterback, serious and studious enough to put the coach’s grand plans into motion, to make crucial decisions when the game, and maybe the season, was on the line, and to endure Lombardi’s sometimes harsh criticism. Starr became a passionate student and a superlative field general, and he never stopped giving Lombardi credit for his success.

“I loved it,” he recalled in David Maraniss’s 1998 book, “When Pride Still Mattered: A Life of Vince Lombardi.” “I loved the meetings. I never, ever was bored or tired at any meeting we were in with Lombardi. I appreciated what he was trying to teach. He was always trying to raise the bar.” 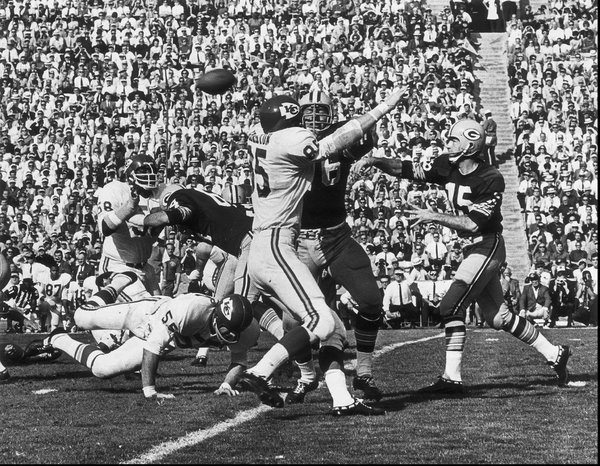 With Lombardi writing the script, Starr directed the offense, calling the plays. His most memorable was his boldest.

It happened in the frigid twilight at Lambeau Field in Green Bay, Wis., on Dec. 31, 1967, in the league championship game between the Packers and the Dallas Cowboys, now known as the Ice Bowl. The temperature was 13 degrees below zero, and a new heating system installed beneath the turf had failed. Players slipped and fell all afternoon. Starr fumbled disastrously, leading to a Dallas touchdown.

With less than five minutes to play, the Packers trailed, 17-14, with nearly 70 treacherous yards between them and the end zone. Mixing short passes with run plays, Starr calmly marched his team within two feet of a touchdown. But in the final minute, the Cowboys twice stopped the Packers when they tried to run the ball into the end zone. Sixteen seconds remained when Starr called a timeout and walked to the sideline to confer with Lombardi.

There was no talk of kicking a field goal to tie and force overtime. As Lombardi later recalled, he was worried that Green Bay’s benumbed fans could not endure an extra period. Starr told the coach that the running backs were struggling to get traction, but that he thought he could sneak the ball across the line himself.

“Then run it!” Lombardi told him. “And let’s get the hell out of here!”

Starr returned to the huddle and called for a run play without telling his teammates that he intended to keep the ball.

The ball was snapped. Starr hesitated for the slightest moment. Then he dived into the end zone behind big blocks by Jerry Kramer and Ken Bowman. The Packers won, 21-17.

“Texas has the lone star,” read a homemade sign in the stands, “but we have the bright Starr.”

Two weeks later Green Bay defeated the Oakland Raiders, 33-14, at the Orange Bowl in Miami in Super Bowl II. It was the final championship for the Starr-Lombardi Packers. Lombardi resigned as coach and became general manager in February 1968, joined the Washington Redskins as coach and part-owner a year later, and died of cancer in 1970 at the age of 57.

“The dirty little secret of those days,” said Steve Wright, an offensive tackle for the Packers, as quoted in “America’s Quarterback: Bart Starr and the Rise of the National Football League” (2011), by Keith Dunnavant, “was that during the week it was Lombardi’s team, but on Sunday it was really Starr’s team.”

Bryan Bartlett Starr was born on Jan. 9, 1934, in Birmingham, the eldest of two sons of Ben Starr and Lulu (Tucker) Starr. Starr’s father, who was of Native American lineage, served in the National Guard before establishing a career in the Air Force and settling his family in Montgomery, Ala.

Ben Starr believed that Bart’s brother, Hilton, who was two years younger and known as Bubba, had more athletic potential, and he often said so to Bart. When Hilton was 11, he cut his foot on a dog bone while walking barefoot. Three days later he died of a tetanus infection. His death devastated the family, and Bart Starr would later say that it put more distance between him and his father.

When Starr was a junior in high school and playing for the varsity squad, he became the starting quarterback only after the coach’s first choice was injured. But he led the team to an undefeated season and as a senior was heavily recruited.

He nearly chose to attend the University of Kentucky, where the celebrated Bear Bryant was coaching at the time. Instead, to be close to his girlfriend, Carol Morton, he accepted an offer from Alabama. Starr married Ms. Morton in 1954, after his sophomore year.

Playing under Red Drew, Starr became the starter as a sophomore and led the Crimson Tide to the Cotton Bowl. But he missed nearly all of his junior season with a back injury, and as a senior was demoted to a backup role under a new coach. When the 1956 draft arrived, Jack Vainisi, the personnel manager for the Packers, decided to take a chance on Starr, though not much of one: The Packers made Starr the 199th college player chosen in the N.F.L. draft.

Starr floundered in his early years in Green Bay. Then Lombardi arrived. After a few stops and starts, Starr became the starter for good in 1960.

As his star rose on the field, the public began seeing what Lombardi saw: a loyal, dependable leader who worked hard away from the game as well. Unlike many of his teammates, Starr lived year round in Green Bay, where he received “Mr. Nice Guy” awards from community groups — a label that frustrated him but that he never risked contradicting. In 1965 he helped found the Rawhide Boys Ranch, a faith-based nonprofit residential care center for at-risk youth.

Survivors include his wife, Cherry, whom he married in 1954; a son, Bart Jr., and several grandchildren.

A second son, Bret, died of cardiac arrest after taking cocaine in 1988. His death prompted the family to move to Birmingham to be closer to Bart Jr.

In Birmingham, Starr owned car dealerships, built hospitals and was a pitchman for Ford and other companies.

He played four more seasons after Lombardi retired, but he never again made the playoffs as a quarterback. He retired after the 1971 season, his 16th. He was 37.

Starr returned to coach the Packers in 1975 and stayed for eight seasons, but he was not as effective on the sidelines as he had been in the huddle. The Packers, their roster depleted, had just one winning season and won a single playoff game with Starr as head coach. He was devastated when he was fired in 1983, after finishing second in the division with an 8-8 record, but he remained loyal to Green Bay.

In 2000, when the team sought a local tax break to renovate Lambeau Field, Starr’s main stage, it recruited him to lobby for the legislation. He was an emphatic advocate. The legislation passed.