With an all-star ensemble of black musicians and dancers, Solange’s performance piece Witness! felt like being plugged into a synesthetic dream-world: one where black identity, black female expression and black hair took centre-stage.

Standing at the helm of a show she composed, directed and choreographed, the multitalented American led us into a glittering, tangential exploration of her psyche. 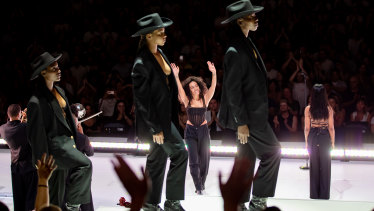 Solange and her singers radiated a sense of fun and intimacy.Credit:Daniel Boud

She arrived to a growling brass section, a crane descending from the sky. Heads thrown back and sidestepping to the beat, Solange and her singers radiated a sense of fun and intimacy throughout – as though it was just the girls getting down to their favourite song. Punters who expected more overt theatrics may have been disappointed: Witness! pushed boundaries in an understated sense.

She unravelled her songs and stitched them back together in different, experimental shapes, jazzier and more discordant. The strange Things I Imagined was full of segues, like a conversational thread forgotten and regathered. Lo-fi banger Way to the Show was sexy and boppier than the studio version.

Then she pouted and strutted through a spoken-word interlude: “I can't be a singular expression of myself/There's too many parts, too many spaces”. The display of hyper-femininity satirised the existential musings, reworking it into a tongue-in-cheek masterpiece.

Less subtle was the show’s political significance. That Solange decided to perform this, for only the second time ever, at the Sydney Opera House: an iconic venue in a Western country that has historically housed the greats of the white, male Western canon? It felt like a moment. Not only because of who she is but because of her content – as she sings in F.U.B.U., “this shit’s for us”. Witness! is a celebration of freedom.

As the lights flashed on and turned solar-red, she got the crowd grooving along to Binz, Stay Flo and finally Don’t Touch My Hair. Movement and sound coalesced as a dancer rolled and slid to follow the slopes of Solange’s voice. Plucked bass reverberated so each song was truly, deeply felt.

Solange is a symbol who stands for more than she is, a responsibility she shoulders onstage with ease and a cheeky grin. To be graced with her presence is to sit back and accept that all the hyperbole applies.