More than a dozen key internal emails from Victoria's jobs department relating to hotel quarantine have been completely blacked out after the department made a claim to the Board of Inquiry that communications about the appointment of Sydney-based security firm Unified should be redacted.

However, the evidence that is available suggests the department's senior officials disagreed strongly over the decision to use Unified, which ended up with the bulk of the security work, including at the Rydges on Swanston, the source of the biggest outbreak of COVID-19. 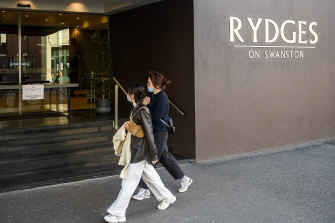 The Rydges on Swanston hotel was guarded by Unified.Credit:Justin McManus

The redacted emails reveal the disagreement was because Unified was not on the department's preferred list of tenderers. However, some of the public servants in charge of the program wanted to hire them anyway partly because they "employ loads of Jobs Victoria clients, so it's actually serving a broader purpose”. Jobs Victoria acts as an employment agency finding work for the unemployed.

Inquiry board chair Jennifer Coate on Thursday announced the due date for her findings had been extended to December 21 after her team sought further information and answers from key government figures, including Premier Daniel Andrews and Chief Health Officer Brett Sutton.

Even so, Mr Andrews said he was confident international flights would be allowed into Victoria before Christmas. An interim report is due to be handed down next Friday, the date the final report was originally supposed to be finalised, and the Premier told his daily COVID-19 press conference on Thursday that meant the government would hit national cabinet's target of having international flights resume by Christmas.

The government has made no announcements about a new quarantine program, and will not do so until it receives the inquiry's interim report. 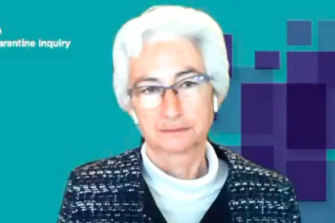 Unified won the bulk of hotel quarantine work in Melbourne, earning more than $30 million in less than four months. But guards working for the company were infected with COVID-19 in the Rydges on Swanston, which has been linked to at least 90 per cent of cases in Victoria’s second coronavirus wave.

The Department of Justice, Precincts and Regions has claimed legal privilege over a number of emails created in early April, just days after the quarantine program began. A lot of them have therefore been redacted. The emails involve correspondence between the department’s legal and procurement teams, which became involved after it was discovered Unified was not on the government’s panel of pre-approved security suppliers.

They also show a highly political element to the selection of security companies. Notes of a meeting between senior official Katrina Currie, department secretary Simon Phemister, deputy secretary Alex Kamenev and another official on March 28 show that Mr Kamenev was given the task of asking Trades Hall for its view of a number of security firms.

Two days later, Mr Kamenev reported to Ms Currie and another senior official, Jim Round, that Trades Hall was not keen on Unified. The email also refers to a man whose name has been blacked out who seems to have decision-making power. He “agreed to Unified for 48 hours initially as they aren’t preferred with Trades”, Mr Kamenev reported.

Mr Round, a deputy secretary at the Justice Department, worked in the Premier’s office between 2017 and 2019. Before that, he was an adviser in the office of Julia Gillard while she was prime minister. Neither he nor Mr Kamenev have been asked to give statements to the inquiry.

Mr Round declined to comment on the emails and a spokeswoman for the department said all relevant information had been given to the inquiry and its claims of legal professional privilege were accepted by the inquiry.

An unidentified jobs department official said on March 31 they believed the security company was a risk because it had "not undergone a due diligence process and has not agreed to the service standards as set out in the Security Services Contract”. Unified was also not popular with the Victorian department of Treasury and Finance, emails show.

The following day the official in charge of security contracts was even more blunt: Unified “will not be allocated any additional sites”, he wrote.

But Ms Currie and Mr Kamenev were not giving up without a fight. They pushed, and won an exemption from procurement rules after pointing out the firm’s Indigenous ownership, responsiveness and flexibility.

“We need to use Unified as they are already in place. We need an exemption from the panel and I have been told this is possible,” Ms Currie emailed a colleague.

Get our Coronavirus Update newsletter for the day’s crucial developments at a glance, the numbers you need to know and what our readers are saying. Sign up to The Sydney Morning Herald’s newsletter here and The Age’s here.