A body modification enthusiast has revealed how they spent thousands of dollars transforming themselves into  ‘human dragon’ – and confessed they are now looking for love after 12 years of being single.

Tiamat Legion Medusa, 60, from Texas, who was born Richard Hernandez, had a dream about a snake bite in the 1980s, which they believe turned them into a ‘reptoid’, leading to the dramatic physical transformation.

They have since spent more than $83,500 (£61,000) on modification surgeries including ear removal, tongue splitting, castration and countless tattoos and are nowhere near finished.

They hope to add ‘horns’ to their head and plan to have their remaining six teeth removed in order to get a full set of dental implants designed to look like dragon’s teeth – something they described as an ‘immediate priority.’

They are also planning to have a penectomy – removing their penis entirely in a bid to become ‘the world’s first and only genderless dragon.’

Now, after 12 years of being single, they are even considering dating again, revealing: ‘The perfect human man for me would be one with no tattoos or modifications of any kind, one that is the total opposite of what I am.’ 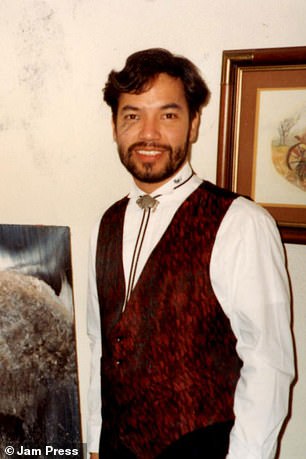 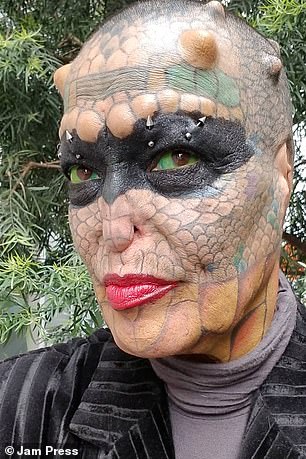 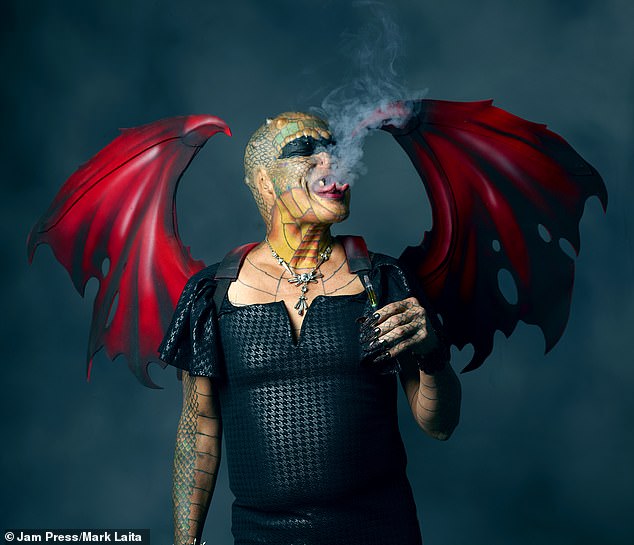 For Legion, it all began back in the 1980s when they were in their 20s, when they had a dream that had a ‘very profound’ effect on their life.

Legion said: ‘[In the dream] I found myself surrounded by snakes, of all colors and the snakes were all biting me and I was very much afraid, but as the dream went on and they kept on biting me, I could see that I was not being hurt by them or their bites.

‘It was when I realized this that my fear began to subside and I felt safe and at peace and I was not afraid of the snakes, then I woke up.

‘I can still recall the dream so vividly as if it happened last night, and it was then that I knew there was an important message for me in my dream – it was an omen that I was one of them, a sign of things to come in my life. 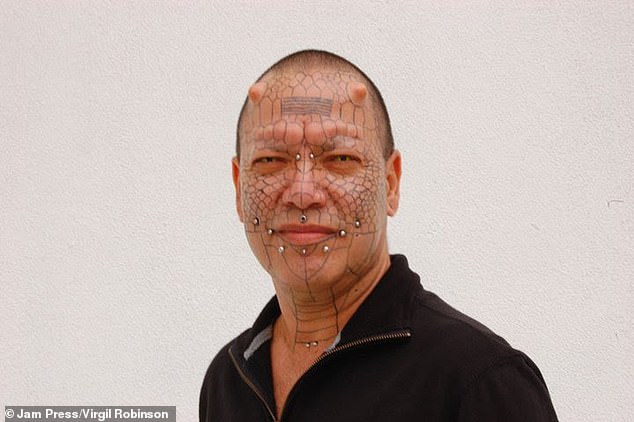 Pictured: Richard at the beginning of their transformation, when they still had ears and a human nose. Bit by bit, they have gone to extreme lengths to change their appearance 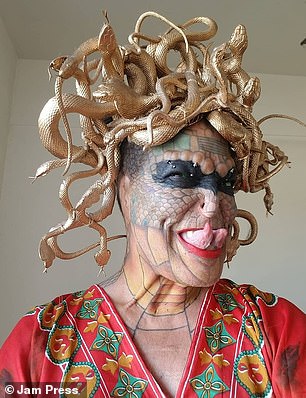 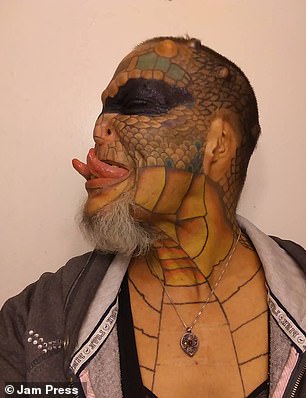 The body modification enthusiast, who has face tattoos and prosthetics, said they either dealt with nice respectful people, or with ‘mean and ugly’ ones

‘Today I believe that when those snakes were biting me in my dream that they were in effect injecting me with their venom as a way to give me that venom making me like them, which is why today I am a venom-spitting dragon, as opposed to being a fire-breathing dragon like many people incorrectly assume.’

Their identity crisis began as a child, when Legion alleges they faced abuse that led to a ‘disconnect’ from the human race.

WHAT ARE THE SYMPTOMS OF HIV?

Most people who are infected with HIV experience a short, flu-like illness about two to six weeks after infection.

The symptoms usually last for between one or two weeks.

After the initial symptoms, those with HIV may not have any more symptoms for several years.

Later on, other symptoms that may present themselves include weight loss, chronic diarrhoea, night sweats and recurrent infections.

They were diagnosed with HIV in 1997 and decided to change their life completely by ‘shedding’ parts of their humanity.

Legion added: ‘I am removing parts of myself that offend me including some of my physical attributes and also how I live my life today as a creature that is part-human and part-reptilian.

‘Having been to hell and back, having endured so much cruelty at the hands of humans, making myself into something from another species is my own way of dealing with the spiritual, emotional, psychological pain and anguish that continues to torment me through my life today.

‘This is my way of dealing with life and the hand that was dealt me.

‘It may not be how others would have handled things but this is my life and I will do things my way – and I will continue to march to the beat of my own drum.’

Legion continued: ‘I believe that I am a real and true life reptoid, a half-human/half-reptilian creature.’

‘I can deal with being part human, just as long as I am also part reptilian because, with my being a transspecies, no longer being ‘just human’ gives me a peace that passes all understanding.’

Legion considers themselves a ‘venom-spitting dragon’ – something that is more figurative than literal. 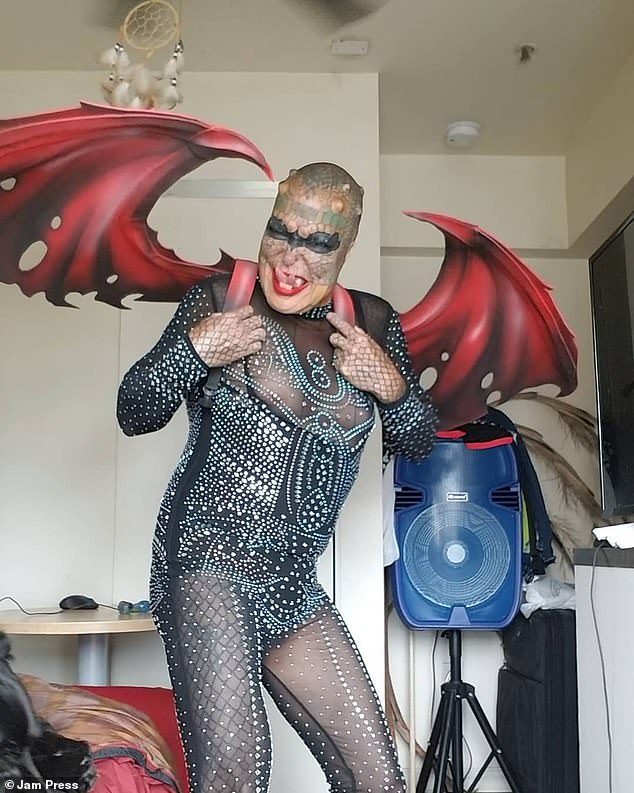 Legion, pictured, has been single for 12 years, but still hopes to one day find love. However, they said they want their future partner to have zero body modification 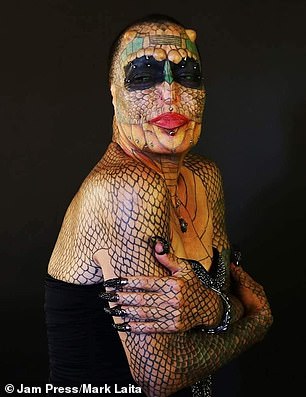 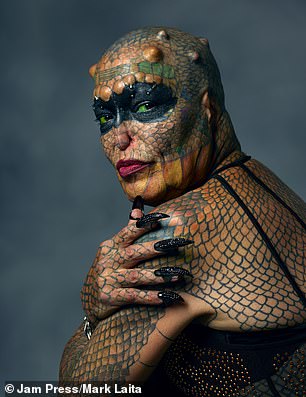 Legion, pictured, said they had other ‘reptilian’ friends around the world, but were hoping to make a romantic connection with someone as well

They said: ‘It’s not so much that I have actual venom shooting out of my fangs but it comes from my heart.

‘It can be either a combination of something good or not so good, depending on a particular situation and how I deal with people who are either nice and respectful, or those who are mean and ugly.

‘My motto is that each is met as each deserves – I use my intellect and words, which can make flowers grow or cut like a knife, and people can be nice or they get to taste my venom.

‘This is where my happy place is – knowing I have gone to great lengths to find my happiness and finding it in another species.’ 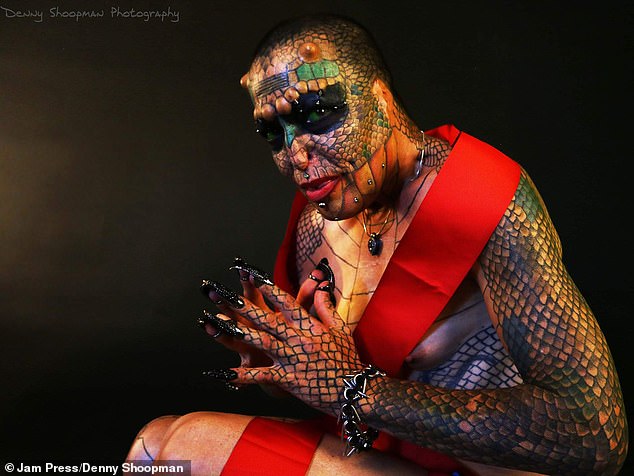 After spending $83,500 on their transformation, Legion said they are not done still and want to get rid of their male genatilia to become ‘genderless’ 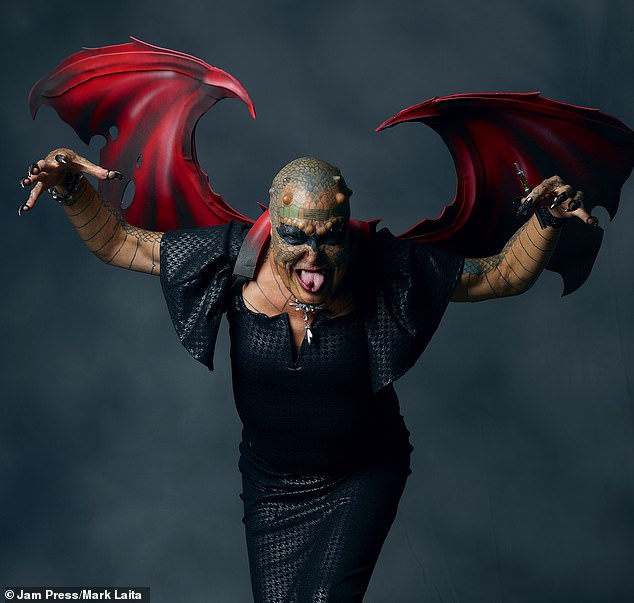 The ‘human dragon’ said they felt a ‘disconnect’ from human race after being bullied in school as a child, and said it launched their identity crisis

Legion believes they will finally be finished with their transformation by 2025, at which time they hope to be fully happy with their appearance.

Legion said: ‘I have recently warmed up to the idea of dating but getting started is not going to be easy for me.

‘I have particular tastes in men – and I do mean human men – but my ultimate desire and hope is to meet a fellow reptoid so we can be a perfect couple.’

‘While I have many reptile enthusiast friends around the world, I have yet to make a connection with someone else that also identifies as a reptilian – but I know they are out there somewhere. 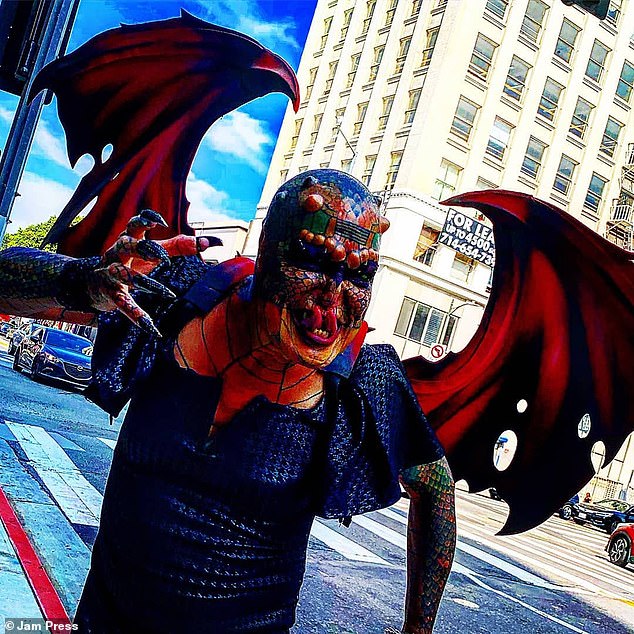 Legion’s body modification journey, pictured, began in the 1980s, when he was in his 20s, and dreamt he had been bitten by a snake 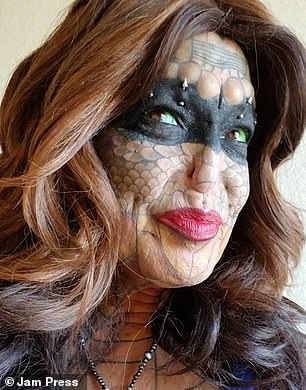 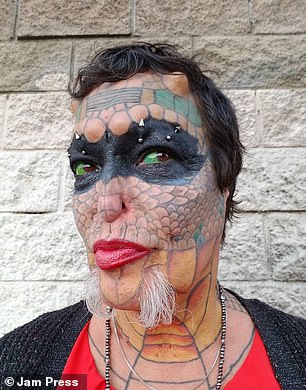 Legion has also modified their nose in order to make it appear more reptilian than human, and has removed their ears as well, pictured

‘Destiny has yet to bring us together but it will happen.’

Legion previously made headlines in 2019, where they self-identified as ‘Dragon Lady’ – but fluid Tiamat has since dropped the title and prefers to be known as Legion the Dragon, or simply Legion.

They have also changed their name legally to Tiamat Legion Medusa, after petitioning the court for their gender marker to be changed to non-binary on their birth certificate. 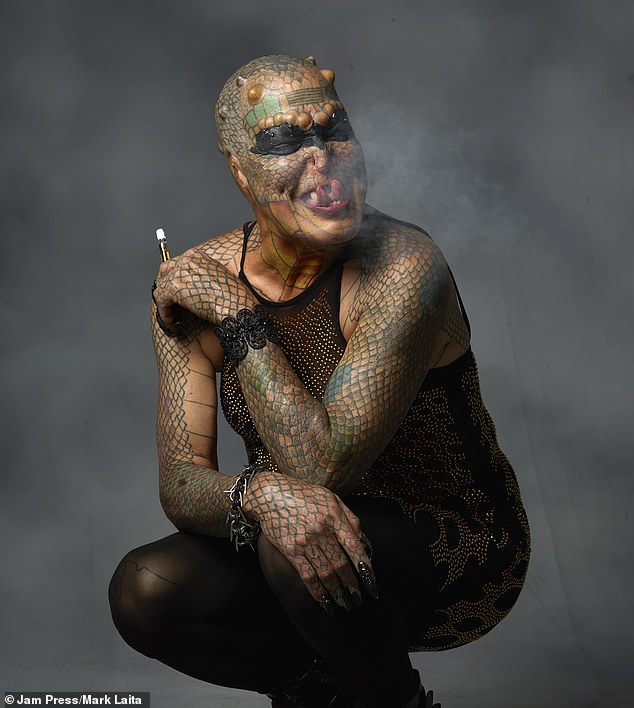 Legion specified they did not identify as a fire breathing dragon. They have changed their birth certificate to show they are non-binary and changed their legal name. They now want to be called ‘Legion the Dragon’