Rose Hartley is a graduate of the Clarion Writers’ Workshop. She lives in Adelaide. Her first novel, Going Nowhere, is published by Michael Joseph.

The saddest and funniest of Austen’s novels. Anne Elliot must cater to her vain and dismissive family members while they squander their fortune, her best friend has been the cause of the deepest pain in her life, she’s forced to watch the man she’s loved for eight years court another woman, and she must keep silent about it all out of pride and social convention. Her fate hangs on the greatest love letter ever written: ‘‘I am half agony, half hope.’’ Anne’s inner turmoil, masked by her outward silence, hits me with the same power every time I re-read it. 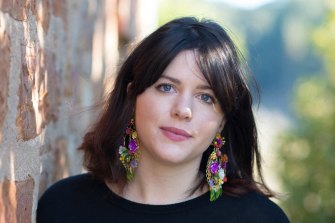 THE BUS DRIVER WHO WANTED TO BE GOD
Etgar Keret

This short-story collection made a huge impression on me at university because of its fresh, strong, plain-talking voice. Keret writes hilariously and painfully about hapless nobodies, weirdos, murderers, depression, suicide, and PTSD from compulsory service in the Israel Defence Forces. Simple and heartbreaking.

Le Guin’s masterpiece is about a self-isolated utopian anarchist society on a moon called Anarres and a physicist, Shevek, who wants to make peace and exchange ideas with the capitalist nation of A-Io on a neighbouring planet. It deals beautifully in ambiguities, how language shapes thinking and culture, how capitalism relies on inequality and suffering in order to function, and how even the noblest ideals can calcify into dogma. It’s a book that reminds me that we made the unfair systems we live in and that there might be better options out there.

Cory Taylor died in 2016 from cancer but before she did, she wrote this brilliant, heartfelt, pragmatic, clear-eyed memoir about the end of life and the difficulty of talking about it. It’s part philosophy, part memoir, part interrogation into the medical and legal system’s brutal insistence on the undignified extension of life. What stays with me most is the raw, simple honesty of her sadness about her own death. It’s a book I return to when I can’t decide if I actually like being human.

Taylor Swift Let a Biden/Harris 2020 Ad Use Her Song ‘Only the Young’
We and our partners use cookies on this site to improve our service, perform analytics, personalize advertising, measure advertising performance, and remember website preferences.Ok