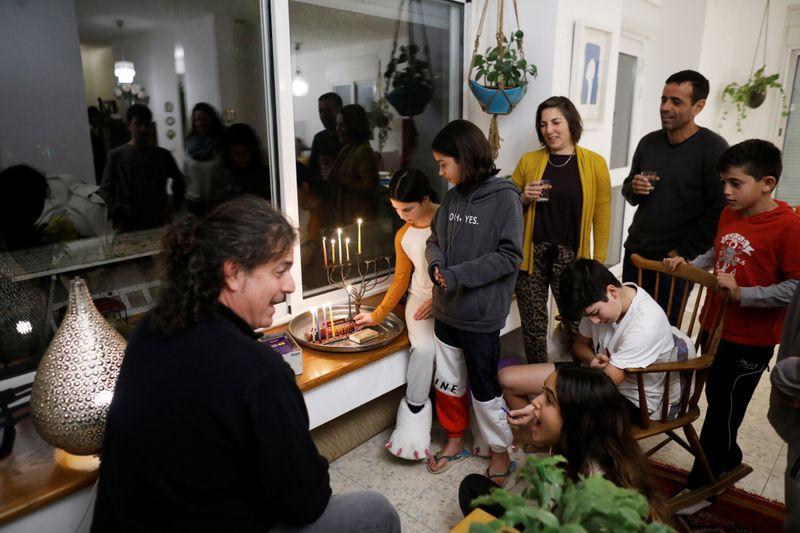 RAMAT GAN, Israel (Reuters) – As sun set on Sunday, Jews across Israel marked the last night of the Hanukkah festival of lights.

Hanukkah, Hebrew for “dedication”, commemorates the 2nd century BC victory of Judah Maccabee and his followers in a revolt in Judea against armies of the Seleucid Empire and the ensuing restoration of the Jewish temple in Jerusalem.

Light is a main theme of the eight-day festival because, Jewish tradition says, the Maccabees found only enough ritually pure oil to fuel the temple’s ceremonial lamp, The Menorah, for one day, but it burned for eight days.

During the holiday, it is customary for friends and families to get together in the evening and light the hanukiah, a nine-arm candelabra traditionally set by the window, and to eat jam-filled doughnuts or deep-fried potato pancakes.

One special candle, the shamash, is used to light a Hanukkah candle for each day of the holiday starting with one candle on the first night and another each evening.

Hanukkah often holds special significance for Israelis who see the Maccabee victory as symbolic of Jewish triumph in dark times. Avraham Harshalom, 95, is a survivor of the Nazi Holocaust whose parents and brother were murdered in Auschwitz.

As the 75th anniversary of the camp’s liberation approaches, Harshalom lit the hanukiah with his grandchildren, at his son’s home in Ramat Gan. Harshalom moved to the newly-founded Israel in 1949.

“We are lighting candles 75 years after, it is a good feeling to be in the bosom of my family, with my children, with my grandchildren – it is a great joy,” said Harshalom.