“What a shame! The Australian PM was mocked by netizens around the world for demanding that China apologise!" said a headline on New Impression Media's Sydney Impressions WeChat account. 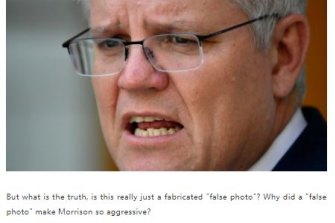 A translated screenshot from the Australia First Media site about the Twitter controversy.

The online article, aimed at Chinese-Australian residents in Sydney, went on to say Mr Morrison had been "laughed at by the whole world for two days” as a result of his call for China to apologise over the fabricated image of an Australian soldier holding a knife to the throat of an Afghan child.

The same media organisation's Melbourne publication, Melbourne Youth Club, headlined its story: "Australian soldiers killed general citizens and slaughtered children, and when the truth was exposed they claimed China was slandering them!”

The story went on to say that Mr Morrison's comments had drawn global attention to the alleged actions of Australian special forces soldiers in Afghanistan. 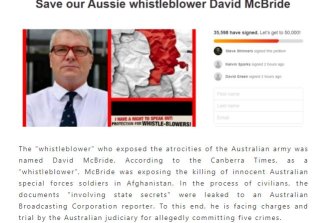 The Chinese Communist Party covertly controls sections of Australia's Chinese-language media in an effort to seek influence in Australia, according to briefings by the Office of National Intelligence.

Articles on the Afghanistan controversy disseminated by these media organisations online, including via government-censored platform WeChat, this week veered from relatively straight to ultra-nationalistic.

The fabricated image tweeted by Mr Zhao, a senior government official, was "just a painting freely created by its author … a Chinese citizen expressed their opinion, why are you demanding that China should apologise?” the article said.

It also made reference to other previous instances of alleged anti-Chinese racism, including a 2015 episode of the BBC’s Horrible Histories which depicted ancient Chinese empress Wu Zetian eating rats, cockroaches, and jellyfish with apparent relish, and Nationals senator Barry O'Sullivan referring to a "Chinaman" in a Senate speech on biosecurity.

Hazza, a Queenslander whose real name is Harry Harding, grew famous in the Chinese media in 2011 for recording Chinese songs. He went on to become a TV and radio host in Guangdong.