Sydney’s Anglican Archbishop Kanishka Raffel said Australia should respond as generously to the unfolding crisis in Afghanistan as it did to the Tiananmen Square massacre and Syrian civil war. 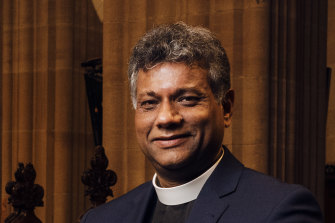 “Opening up your heart and your home and responding to the transparent needs of people – it is Christian, but it is a feature of human compassion,” he said.

“We went to Afghanistan to secure the freedom of Afghan people, and now we need to bring as many as we can, as generously as we can, so that they can share our freedom.”

Archbishop Raffel said such generosity would reduce the need for people to make dangerous boat journeys exploited by people smugglers, “but refugee status in the end is not assessed by mode of transport”.

In a letter to Prime Minister Scott Morrison on Thursday, Catholic Archbishop of Brisbane Mark Coleridge, president of the Australian Catholic Bishops Conference, called for Australia to take at least 20,000 refugees from Afghanistan, the same number as Canada.

Mr Morrison has so far committed to allocating 3000 places within Australia’s existing refugee program for people fleeing Afghanistan in the next 10 months, but said that was “a floor, not a ceiling”. Archbishop Coleridge said it was “a substantial commitment, but more is needed”. 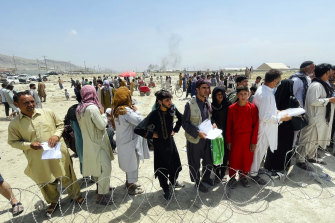 The federal government has been urge to increase its intake of refugees from Afghanistan. Credit:AP

Employment Minister Stuart Robert, who served in the ADF for 12 years, said the situation in Kabul was difficult, uncertain and dangerous but “we’ll continue to work on getting the remainder out”.

Liberal MP John Alexander has called for a special intake of an extra 12,000 Afghan refugees above the annual refugee quota, but Mr Robert would not be drawn on that proposal.

Last week Mr Morrison also confirmed Afghans who came here by boat and were in the Australian community on temporary protection visas would not be asked to return to Afghanistan but would not be offered permanent residency.

“That will not change, I want to be very clear about that,” he said. “I want to send a very clear message to people smugglers in the region that nothing’s changed. I will not give you a product to sell and take advantage of people’s misery. My government won’t do it.”

Bishop Vincent Long, who chairs the Catholic Bishops Commission for Social Justice, Mission and Service, said Australia should not only give those Afghan asylum seekers permanent protection but support family reunion applications so that their loved ones – who were in “grave danger” – could come to Australia.

“We need to support Afghans, and we need to live up to our international obligations, and also live up to our status as a prosperous society, one with a courageous past that welcomed previous waves of refugees,” Bishop Long said.

“The pandemic has incidentally made us realise that we are only as strong as our weakest link. Our solidarity with, and support for, the suffering Afghan people are essential for a long-term peace and flourishing of the whole human family.”

Archbishop Raffel agreed those asylum seekers should urgently be given permanent residency. “I’m very supportive of the idea that they should be allowed to stay here [and] we should bring some certainty to that,” he said.

A spokesperson for Australian Christian Churches, a network of Pentecostal churches, said: “The ACC believes we should do everything we can in Australia to help assist those fleeing for their lives in Afghanistan.”

Get a note direct from our foreign correspondents on what’s making headlines around the world. Sign up for the weekly What in the World newsletter here.