CRAIG BROWN: What would ‘Aunt Margo’ say to Harry?

Writing in an overlooked passage in his reckless autobiography, Prince Harry mentions his relationship with his great-aunt, Princess Margaret, the younger sister of the Queen.

‘She was my great-aunt, yes, we shared 12.5 per cent of our DNA, we spent the bigger holidays together and yet she was almost a total stranger,’ he reports. ‘Growing up, I felt nothing for her except a bit of pity and a lot of jumpiness. She could kill a houseplant with one scowl.’

He says that, ‘like most Britons’, he learned about her from others: ‘Great loves thwarted by the Palace. Exuberant streaks of self-destruction splashed across the tabloids.’

He — or possibly his ghostwriter — has clearly read my book, Ma’am Darling: 99 Glimpses Of Princess Margaret, as he mentions Picasso’s sexual obsession with her, which her earlier biographers overlooked. 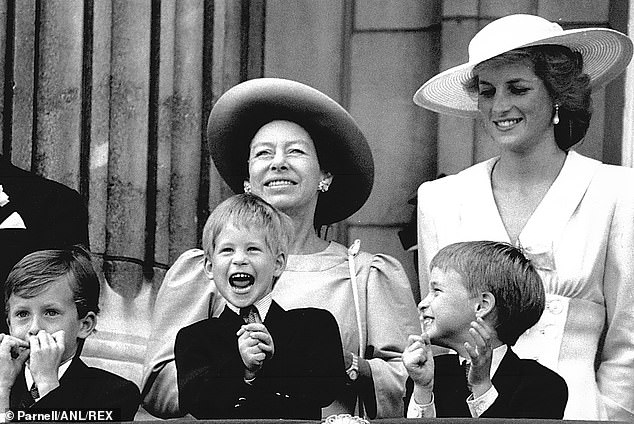 Prince Harry (front middle) mentions his relationship with his great-aunt, Princess Margaret (back middle), the younger sister of the Queen

She tended to ignore Harry as a child, he writes, and hardly ever spoke to him, usually failing to acknowledge his presence. Only later, after her death in 2002, did it occur to him that they were birds of a feather.

‘Aunt Margo and I should have been friends. We had so much in common. Two Spares. Her relationship with Granny [her sister, the Queen] wasn’t an exact analogue as mine was with Willy, but pretty close. The simmering rivalry, the intense competition (driven largely by the older sibling); it all looked familiar.’

Well, yes and no. Like Prince Harry, from an early age Princess Margaret was conscious of being what Harry, in his self-pitying manner, calls ‘the shadow, the support, the plan B . . . backup, distraction, diversion and, if necessary, a spare part’.

Like Harry, she was also conscious of the way in which, as her life went on, and more royal babies were born, her place in the order of succession dropped lower and lower.

At birth, she had ranked fourth in line to the throne, but then she went up to three with the abdication of her uncle, and to two with the death of her father. But from then on, it was downhill. She was overtaken first by Prince Charles, then by Princess Anne, and so on, until by the end of her life she had slipped behind Zara Tindall.

When they were little, Elizabeth had told their governess: ‘Margaret always wants what I’ve got.’ And, from the evidence in Spare, the same could surely be said of Harry and his elder sibling. The biographer Selina Hastings, who knew Margaret, described her life to me as ‘a game of Snakes and Ladders, all snake and no ladder’.

In turn, while her sister was known for her reliability, Princess Margaret became a byword for bad behaviour. ‘It was inevitable,’ she once explained to her friend Gore Vidal. ‘When there are two sisters and one is the Queen who must be the source of honour and all that is good, then the other must be the focus of the most creative malice, the evil sister.’

So, if Harry and Margaret had ever got to know one another, they could have discovered they had much in common. Perhaps they might have compared notes on lives gone adrift.

‘Oh, ma’am, you look so sad,’ Margaret’s friend and lady-in-waiting Anne Tennant (later Lady Glenconner) said to her, as they both emerged from the Coronation of Queen Elizabeth II.

‘I’ve lost my father, and I’ve lost my sister,’ replied Margaret. ‘She will be so busy. Our lives will change.’

Harry’s account of his father’s wedding to Camilla carries eerie echoes of that conversation. ‘I knew without question that this marriage would take Pa away from us,’ he writes. And of his brother William’s marriage, he records that ‘I couldn’t help feeling that this was yet another farewell’.

But, in one important area, the two of them were very different. Margaret always remained resolutely loyal to her sister, and wouldn’t breathe a word against her. If she had lived to hear Harry banging on about their shared competition with their older siblings, she would have sent him to Coventry, with no possibility of a return.