DAN WOOTTON: Djokovic is the whipping boy for angry Australians who realise their two-year obsession with zero-Covid has done their country more harm than good but still can’t bring themselves to admit it

The shameful and scandalous Novak Djokovic court case was, like so many other pandemic-era made-for-media events, pure Covid theatre.

While the Serb has now become an international symbol for fighting against coronavirus tyranny, the unsavoury saga shows just how far usually freedom-loving Australia has fallen down the rabbit hole of virus-inspired authoritarianism over the past two years.

The vicious attitude from local politicians and most Aussies shows the real dangers of a Zero Covid policy.

As I’ve been warning since 2020, it makes society nasty and inward looking – millions of paranoid residents now suspiciously regard international arrivals, even those with Australian passports – even sometimes their own relatives – as plague rats, determined to spread ‘deadly’ Covid Down Under.

Vaccination mandates have been accepted by most of the Australian media and politicians as an unquestionable necessity, with those who choose to remain unjabbed worthy of being alienated from society and individually shamed. 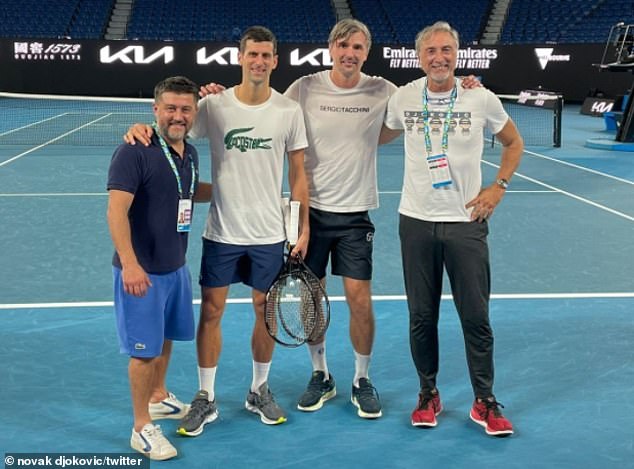 A young and healthy Home and Away cast member – Harley Bonner – was forced to leave because of the soap’s mandatory vaccination policy.

The growing outrage from honest Aussies fighting for liberty and freedom has been largely censored by the mainstream media, with massive protests given short shrift and anyone who dares lift their head above the parapet dismissed as an irresponsible anti-vaxxer.

So Djokovic most likely had no idea he was entering a tinderbox of confected outrage ready to explode as he flew into Australia after announcing on Instagram just six days ago, ‘I’m heading Down Under with an exemption permission.’

With Prime Minister Scott Morrison facing what’s expected to be a close election within months and the media quick to express outrage at the so-called double standards, within 24 hours Djokovic had become the most hated man in Australia.

Two years of such draconian policies has made Aussies angry.

Locking Djokovic up in a refugee quarantine hotel and doing whatever necessary to make it look like he was being handed tough treatment became a political necessity for Morrison.

But the entire farce shames the PM, opposition politicians and the Aussie authorities who blindly went along with it all. 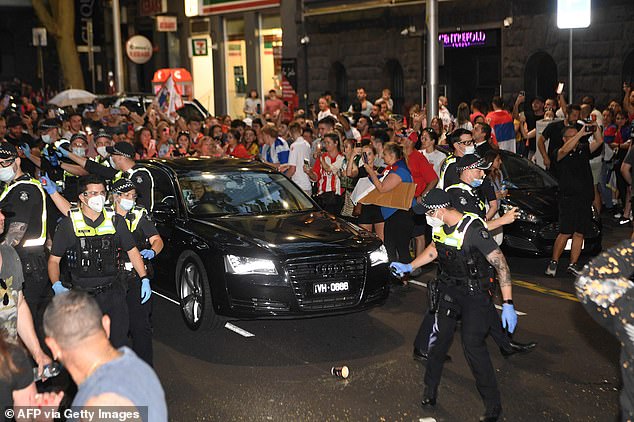 Novak Djokovic has been freed from immigrant detention in Australia, with a black car thought to be carrying him mobbed by fans as it left his lawyers’ offices in Melbourne late today

As the incredulous judge Anthony Kelly in today’s show trial pointed out, the government acted ‘unreasonably’ when it reversed Djokovic’s visa and tried to deport him for violating Covid vaccine rules.

Djokovic HAD followed all the rules, closely negotiating with tennis authorities in a bid to prove his natural Covid infection within the past six months meant it would still be possible to enter unvaccinated.

But that was never going to be good enough for a country which has seen its moral compass turned upside down thanks to a hysterical and over the top response to a virus.

The treatment of Djokovic was about local politics, not public health or the safety of Australians.

In reality, the most devastating thing for public health in Australia has been two years of some of the most draconian and ultimately failed lockdowns in the world, including the near total closure of the international borders, illegally banning citizens trapped overseas for much of that time.

Such a policy meant, until the inevitable Omicron outbreak, there was virtually no natural immunity, so Covid is now predictably ripping through society, as it was always going to.

An Aussie friend of mine recently went camping with 60 friends – all double vaccinated – to a beach town. All 60 were infected with Omicron. 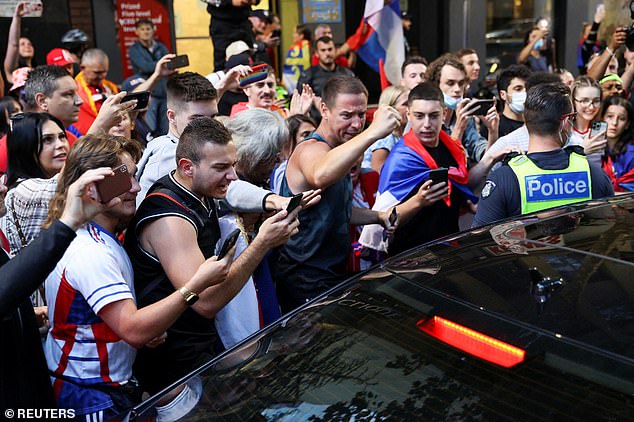 But rather than question the complete collapse of a failed Zero Covid policy that has wrought so much long-term damage on Australia, it’s much easier for political leaders and the media to try and blame someone like Djokovic, who goes against the Covid orthodoxy.

It is going to take at least a decade to roll back the psychological damage of authoritarian Australia in the Covid-19 era.

Over the past two years untold human injustices have been propagated by state governments in order to pursue the completely futile fantasy of maintaining Zero Covid.

Cancer patient Michael O’Keefe was stranded in New South Wales for three months, being denied a return to his home in Queensland for specialist surgery on life threatening skin cancers, after he made the trip to visit his dying mother on her deathbed.

Mark Kilian was denied entry to the Gold Coast four times on an £8,000 private charter plane to see his 80-year-old father Frans who weighed just 44kg and was dying of pancreatic cancer, even though he was fully vaccinated, had tested negative to Covid three times, and had offered to wear hazmat suits and tracking devices during the visit. The decision was only reversed after he broke down in tears on a breakfast TV show, where the host Karl Stefanovic called for ‘humanity to prevail’.

Heartbroken dad Brad Jones was barred from seeing his four-year-old cancer-stricken daughter Charlotte, who was undergoing chemotherapy in intensive care in Brisbane, because he was on the other side of the Queensland/New South Wales border in Lismore with his five other children.

Margaret and David Sparks, two pensioners in their 70s, were trapped in the UK for over a year because they’d been on holiday when the pandemic struck. 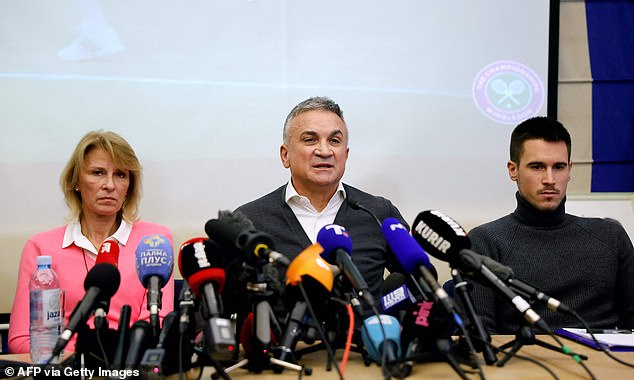 Kristina Sahleström was denied permission to leave her Sydney home to travel to Sweden for the funeral of her mother Ylva. She was forced to watch the cremation on her phone.

Canberra 26-year-old Sarah Caisip was banned from her father’s funeral in Brisbane, but authorities escorted her to a private viewing following the service because such occasions were deemed by the government to be risky environments for Covid spread.

There are thousands of examples of this sort of untold cruelty that has shaped the psychology of how Aussies now view Covid restrictions.

Their thinking goes something like this: We’ve had to put up with this hell for two years, so why on earth should we make it easy for a multi-millionaire sportsman who thinks he’s above the rules.

I said within weeks of the Wuhan virus emerging from China that border closures would not work. The facts back me up 22 months on.

But that hasn’t stopped politicians – national, state and local – embracing border closures with a fervour to try and show they’re keeping the virus out, something that is completely impossible to do.

I understand the frustrations of Aussies who have been cruelly separated from their loved ones for two years while seeing celebs like Rita Ora, Zac Efron, Ed Sheeran, Julia Roberts, Matt Damon and Lord Alan Sugar fly into the country with no issue.

As a dual citizen of Britain and New Zealand, I have been effectively banned from returning to the country of my birth to visit my mum, dad and sister for the past two years.

Meanwhile, the internationally successful Kiwi popstar Lorde, who is rumoured to perform at the upcoming wedding of New Zealand Prime Minister Jacinda Ardern, just so happens to win the lottery system that allows a few hundred passport holders to return to the country each month, conveniently in time for the nuptials.

Melbourne locals – who faced the world’s longest lockdown – are now said to be planning to boo Djokovic throughout the Australian Open.

And that’s the tragedy of what this scandal tells us about post-coronavirus Australia and why Zero Covid policies should be seen by history as inhumane.

Despite his appalling treatment, Djokovic broke his silence following the ruling to say: ‘I’m pleased and grateful that the Judge overturned my visa cancellation. Despite all that has happened, I want to stay and try to compete.

‘I remain focused on that. I flew here to play at one of the most important events we have in front of the amazing fans. For now I cannot say more but thank you all for standing with me and encouraging me to stay strong.’

I’ve never wanted someone to win a tennis tournament so badly.