Dare you take the Green Line love test? It’s the trick that shows who really wields the power in a relationship – SARAH RAINEY analyses celebrity couples to find out who wears the trousers

Do you wear the trousers in your relationship or do you tend to let your partner lead the way? If you’re unsure there’s now a very simple way to find out.

Called the ‘Green Line Test’, it has been doing the rounds online. TikTok has hundreds of thousands of videos about it, racking up 11.2 billion views this week.

So does it really stand up to scrutiny? Yes, says body language expert Mike Carter: ‘We tend to lean physically towards things that we want, like and feel strongly about.’

So, should we all be leaning towards our partners? Rachel New, a relationship coach, says leaning indicates a person is willing to ‘accept influence’, which means they take on board their other half’s suggestions and are open to changing their mind without becoming defensive. 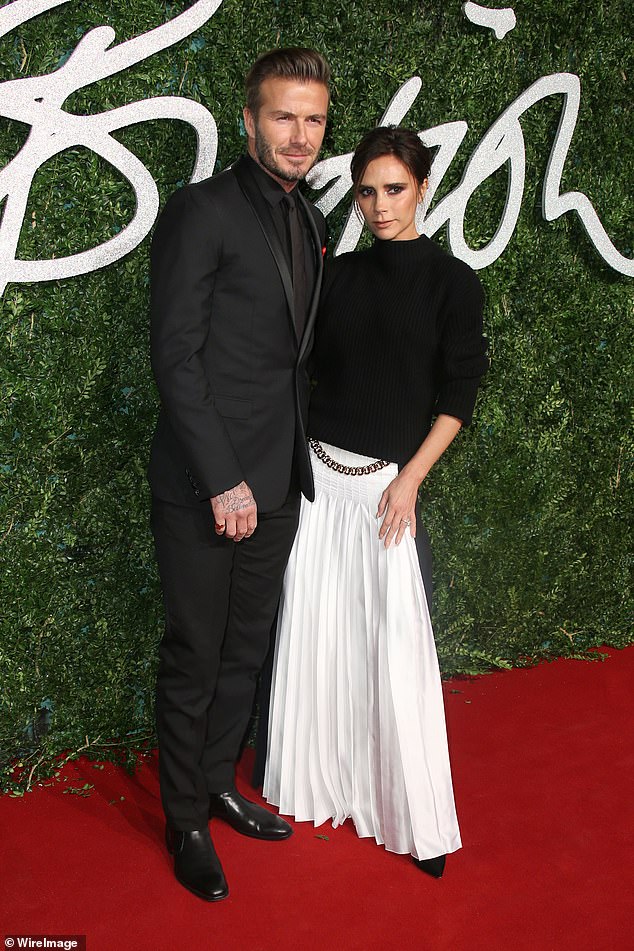 The Green Line Test, to find out who is the dominant partner in the relationship, has racked up 11.2 billion views this week on TikTok alone. Sarah Rainey demonstrates how the test works with celebrity couples including Victoria and David Beckham, (pictured) Harry and Meghan, and Boris and Carrie

‘Men tend to be less good at this, so if the man is leaning in it is a very good sign that he feels secure and confident in himself,’ she adds. ‘Ideally both partners would lean in, but the man leaning in is a close second for a healthy relationship.’ 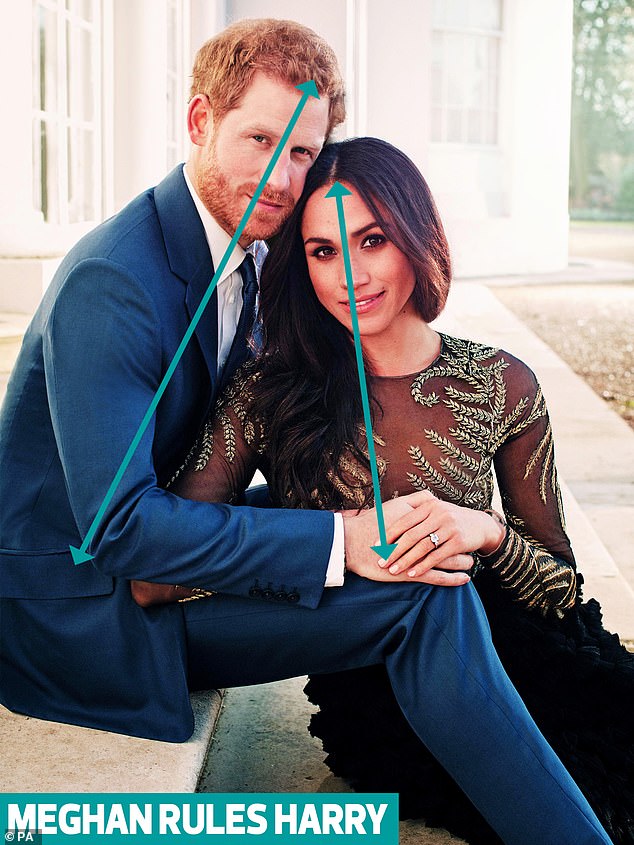 In their official engagement portraits, wedding photographs, and during last year’s bombshell interview with Oprah Winfrey; each time Harry is leaning in to an unbending Meghan

Having moved across the Atlantic to raise his family, it comes as no surprise that it is Harry, 37, who leans towards Meghan, 40, in the majority of photographs. In their official engagement portraits, wedding photographs, and during last year’s bombshell interview with Oprah Winfrey; each time Harry is leaning in to an unbending Meghan.

‘He’s moving in towards her, and the hand position is revealing, too. Her hand is on top of his, and her shoulder is in front of his body, both of which suggest control,’ says Mike.

Power couple Beyoncé, 40, and Jay-Z, 52, have been together for over 20 years and it seems their relationship — which survived a year-long breakup and three children — is on a pretty even footing.

Beyoncé may be more of a household name; she’s sold 118million records and is worth £397million. However, photographs tell a different story. Beyoncé — who once said of her beau: I love him so much we almost feel like one’ — is the one with the diagonal line, leaning towards Jay-Z.

‘She is leaning in and he is holding her, with his arm on top of her to reinforce the balance of power,’ says Mike. 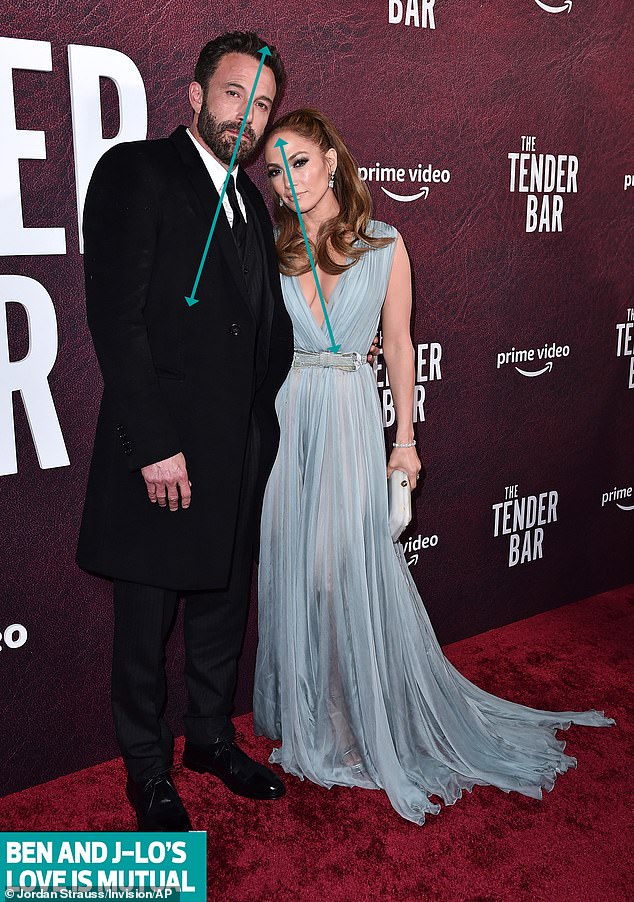 Ben, 49 and J-Lo, 52 have two diagonal lines in their recent pictures, with both leaning lovingly towards one another

Actor Ben, 49, and singer J-Lo, 52, have had a rocky relationship, to say the least. The pair were engaged from 2002 to 2004, avoided each other for 17 years – and then rekindled their friendship before getting back together last June.

Perhaps because of their history, or the fact that they’re still in the honeymoon period, there are not one but two diagonal lines in their recent pictures, with both leaning lovingly towards one another.

‘This is an affectionate photograph,’ says Mike. ‘Their bodies are reasonably straight but the angle of the head is important. A straight head is confrontational, but putting your head on an angle is more sympathetic and appeasing.’

WILL SMITH AND JADA PINKETT-SMITH 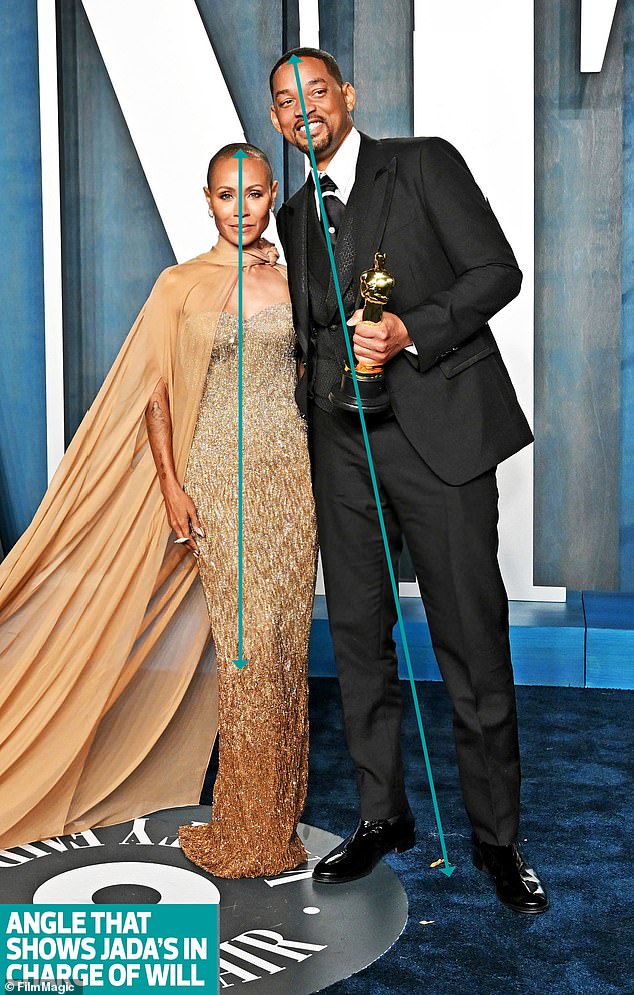 Body language expert Mike Carter says that the complexity of Will and Jada’s relationship is reflected in their photographs. He says that although he is leaning into her, Will’s arm around Jada also suggests that his is protecting her

His Oscars outburst might give a clue to the dynamic in this relationship, and pictures display a clear pattern of Will leaning in.

Will, 53, and Jada, 50, have a notoriously complicated relationship: there were rumours of an ‘open marriage’ in 2013, they quietly separated in 2016 and by 2018 were back together with Will calling Jada his ‘life partner’.

This complexity is reflected in their photographs, Mike says.

‘While he’s leaning towards her, the angle of his head is quite straight and almost pointing away from her — this suggests he may be being controlled by her. ‘But he also has his arm around her, and this shows he’s protecting her, too. So although he’s leaning in, he is “steering” her from behind. A complex relationship.’ 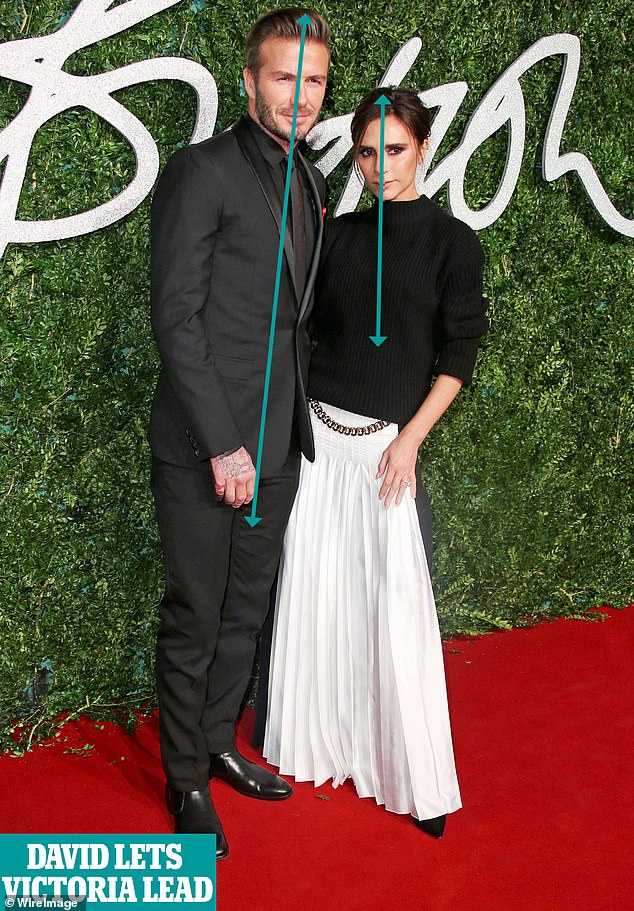 David dutifully leans in towards his wife, Victoria is pictured leaning away. Mike says that she is pushing herself up against him in a pose that says ‘I’m a sexy woman and this is my man’

Possibly the best-known celebrity couple in the world, David, 46, and Victoria, 48, have been photographed together tens of thousands of times during their nearly-23-year marriage. Almost every single picture of the pair — who have a joint net worth of £355million — clearly reveals the balance of power, following the Green Line theory. While David dutifully leans in towards his wife, Victoria is pictured leaning away.

‘She’s almost moving backwards,’ says Mike. ‘She is pushing herself up against him in a pose that clearly says: “I’m a sexy woman and this is my man.”’

David, meanwhile, has a hand behind his back; body language that bolsters Victoria’s dominance. 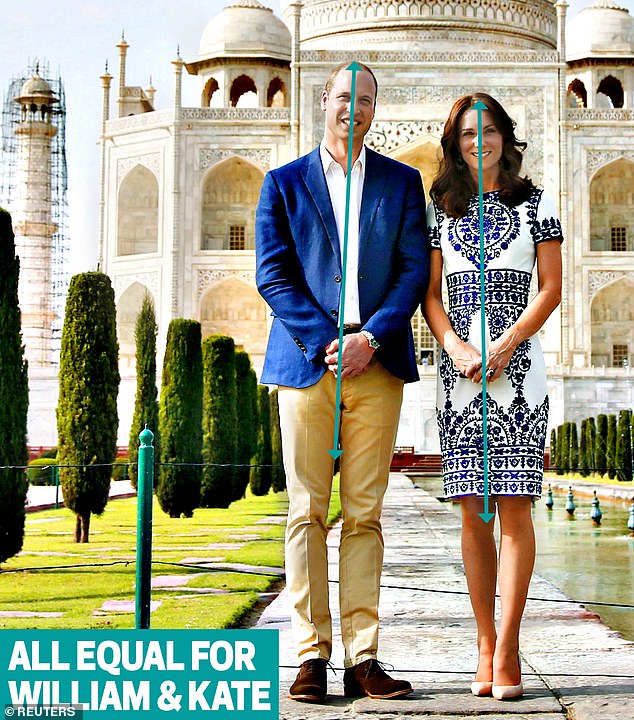 Will and Kate’s lines are very straight, illustrating an equal, shared dynamic. Here, on their 2016 tour to India and Bhutan, both William, 39, and Kate, 40, are straight-backed with only their heads nodding in towards one another

The lines are very straight, illustrating an equal, shared dynamic. Here, on their 2016 tour to India and Bhutan, both William, 39, and Kate, 40, are straight-backed with only their heads nodding in towards one another.

‘He always has his head on one side; this is non-confrontational body language,’ says Mike. ‘And they both have their hands on view, a classic sign of credibility. 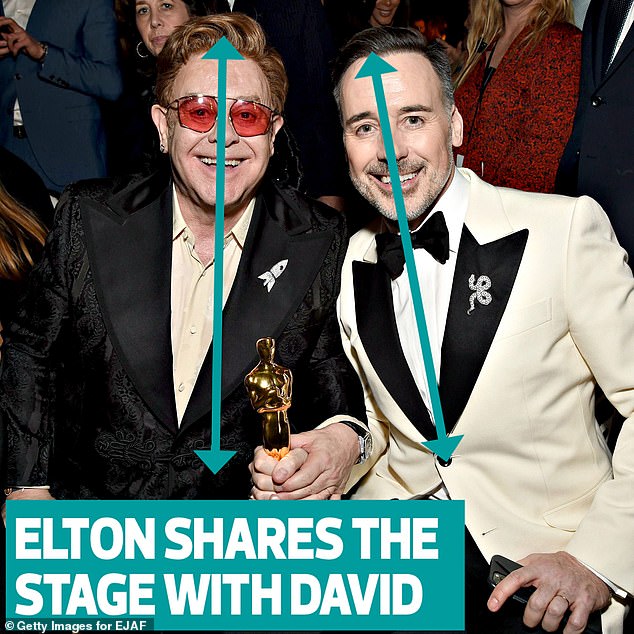 Mike says that although David is grasping Elton’s Oscar here, for best song in 2019’s Rocketman, Elton has handed it over to him – allowing David to hold it

Singer Elton John, 75, who’s sold 300million records over six decades, may dwarf his filmmaker husband David Furnish, 59, in career terms, but pictures suggest things aren’t quite as clear-cut when it comes to their marriage.

Pictured with his Oscar for best song from the 2019 film Rocketman, Elton is sitting straightbacked while David leans in towards him.

However, adds Mike, ‘David is grasping the Oscar even though he didn’t win it. Elton has handed it over, letting David hold it and then putting his hand around David’s. It shows he may be slightly dominant, but it’s also hugely affectionate.’ 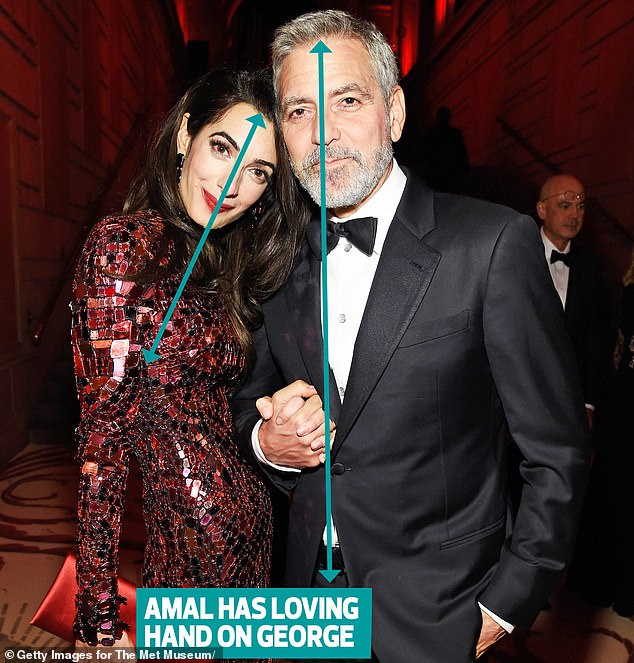 Mike says that Amal is moving towards her husband George, which is a sign that she wants to be protected, but she’s also cuddling up to him, so it’s not simply about dominance

The notoriously private couple, who married in 2014 and have fiveyear-old twins let very little slip about their relationship — and aren’t often pictured in public.

‘She’s definitely moving towards him,’ says Mike. ‘She is wanting to be protected. But she’s also cuddling up to him — it’s not simply about dominance.

‘In fact, the arrangement of the interlocking hands is interesting. Her hand is slightly on top of his, so she’s saying it’s not always him who’s in charge.’ 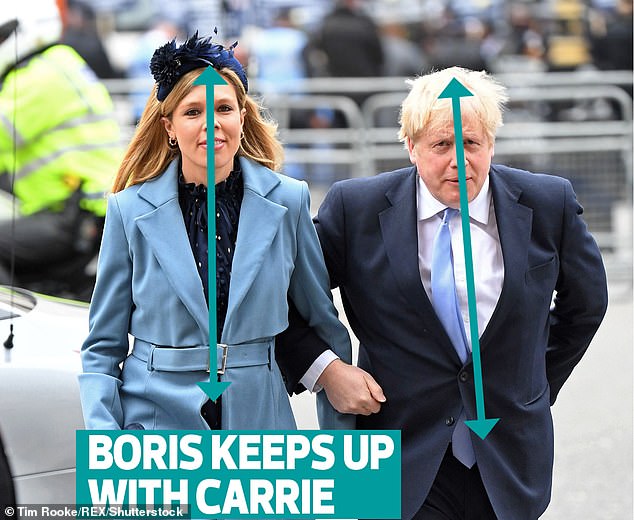 Mike says that there is a symmetry to the way Carrie and Boris are walking in this photograph. He says that they are in sync with one another

Carrie Johnson, 34, might have a reputation for keeping the PM on his toes, but photographs suggest their relationship dynamic is on a much more even keel.

While Boris, 57, who has had two previous marriages and fathered seven children, may come across as bumbling and inept, pictures suggest he is more than capable of keeping up with his younger wife. ‘There’s a real symmetry to the way they’re walking in this photograph,’ says Mike. ‘They’re in sync with one another, which suggests there’s synchronicity in their relationship.

‘Boris always hides his hands; here, one is behind his back, and that’s not a good sign as it suggests untrustworthiness.’

Find a typical full-length photo of you and your partner. Draw a straight line down the middle of each, starting at the head. Usually one line will be vertical and the other diagonal, indicating that one is leaning in. The partner with the vertical line, apparently, is dominant in the relationship, as they’ve stayed still while their other half has moved towards them.