Dave Chappelle struck a somber note for his opening monologue hosting, arguably, the most anticipated episode of Saturday Night Live of the year. Four years ago, Chappelle hosted the show after Donald Trump was elected POTUS. This year, Joe Biden was victorious, making Kamala Harris the first woman ever elected vice president. And that reality made the comedian more reflective.

Dressed in a blue suit, capped off by noticeably oversized white sneakers, Chappelle spoke of his great-grandfather, William David Chappelle, who was “born a slave in South Carolina” and, after learning to read, “dedicated his life to three things: education, the freedom of Black people and Jesus Christ.”

Chappelle being Chappelle then highlighted that both Netflix and HBO Max are streaming Chappelle’s Show without receiving compensation.

Sharing his troubles with his Ohio neighbors (in a town in which he’s resided in some capacity since he was kid) over noise complaints about the comedy performances he’s held in cornfields during the pandemic. The Emmy winner unleashed many controversial racial observations, including one about poor white people not wearing masks.

“I don’t know why poor white people don’t like wearing masks. What is the problem? You wear masks at the Klan rally. Wear it at the Walmart too,” he suggested.

Recalling President Ronald Reagan’s references to Black people being “welfare people” and “drug addicts” in the 1980s, Chappelle, noting “the stimulus checks” and “the heroin” linked to white people today, asked, “Who does that sound like now?”

“The rest of the country is trying to move forward and these white n***ers keep holding us back. Don’t even want to wear your masks,” he quipped.

Throughout the monologue, the critically-acclaimed comic slipped into many deep moments. “Try wearing the mask I’ve been wearing all these years. I can’t even tell something true unless it has a punchline behind it,” he confessed. 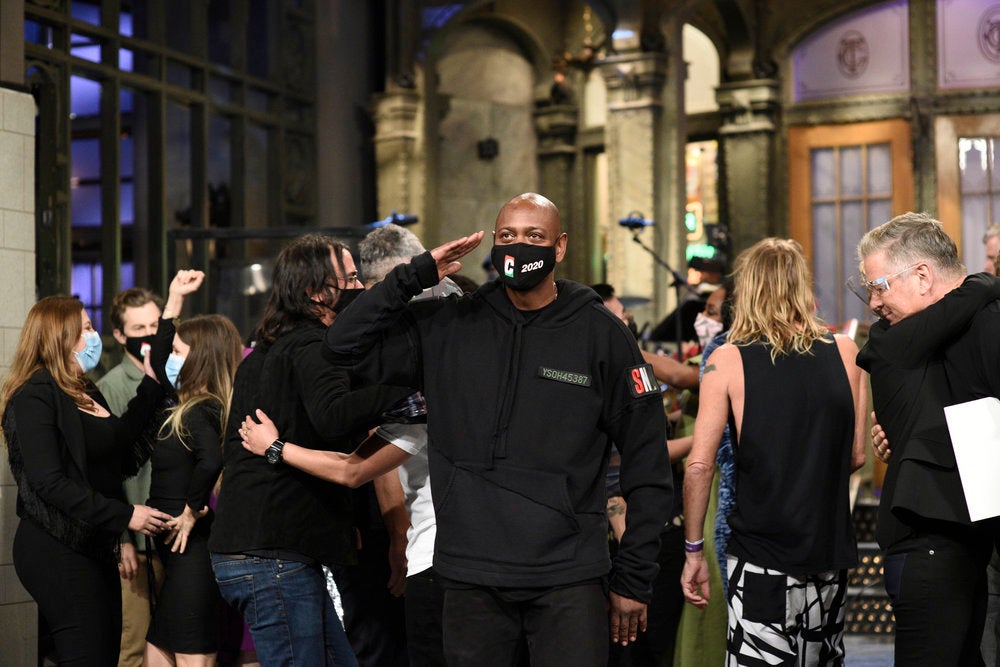 His Trump jokes were largely a miss, and his smoking on stage, a once common practice among comedians, drew notable ire. Still Chappelle, like he did four years ago on the show, sounded the racial alarm.

He promised white people who feel “that anguish, that pain” and are “mad because they think nobody cares” and the police officer who feels like a target and is “appalled by the ingratitude that people have when you would risk your life to save them” that “I know how that feels.”

Serving as more a sage more than a comic, Chappelle said “But here’s the difference between me and you: you guys hate each other for that, and I don’t hate anybody. I just hate that feeling. That’s what I fight through. That’s what I suggest you fight through.” Then he followed it up with a punchline.