Things got spooky on This Morning today when a demonologist claimed she’s learned to cast off demons thanks to her past lives.

Kelly Angel, from Essex, quit her job at her local Greggs to work as a full time demonologist, helping people to get rid of dark energies and demons from their homes.

The 51-year-old who charges her clients £50 for readings but clears houses for free, said she has learned the skill from her past lives as a satanist and demon worshipper.

She casually claimed she opens the gates of hell ‘five to six times a day’ as part of her job, and added she can physically see some of the demons she fights.

Viewers were not impressed with the segment, especially poking fun at Kelly’s claim  of he regular encounters with hell.

Kelly Angel, 51, pictured, from Essex, quit her job at her local Greggs to work as a full time demonologist, helping people to get rid of dark energies and demons from their home

People were not convinced by Kelly’s story, especially her claim she opens the Gates of Hell ‘five to six times a day’

Kelly told hosts Phillip Schofield and Holly Willoughby she discovered her demonologist powers by chance while helping a friend.

At the time, she had been giving readings to client, and met a man who came to her with marks on his neck

‘I thought: “God this man really needs help”, and ended up in his house, and I went and did it. I realised I was able to do it,’ she said.

‘I think it’s more to do with past life training. I’ve got past lives where I’ve done this work.’ 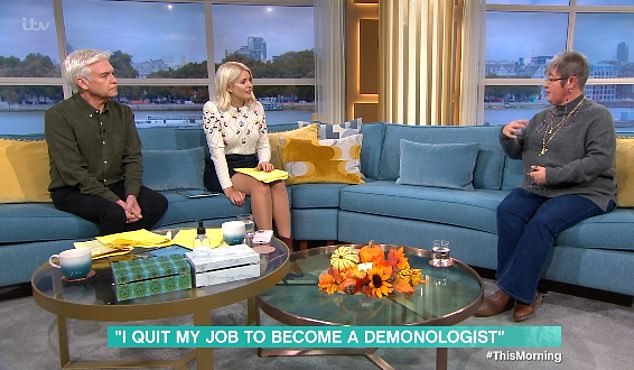 She revealed to Phil and Holly she has learn about dark forces in several past lives where she was a demon worshippers.

‘In four of my past lives, I was actually a satanist,’ she claimed.

‘I worshipped demons in past lives but now obviously my job is to fight the dark side. My job is to open the gates of hell and take them down,’ she added.

She said demons are a much more common occurrence than people realise, saying that a ‘lot of people’ come across ‘dark energy on a daily basis’.

She said there are ‘tale-tell’ signs someone was being followed by demons, including being snappy, depressed and unlucky. 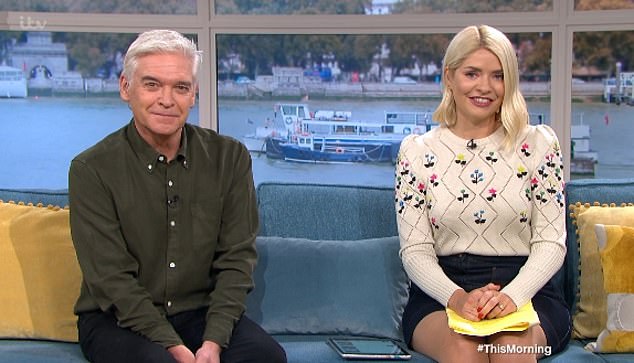 Phil and Holly, pictured, asked Kelly whether she could see demons in the This Morning studio – she said no

‘All this goes on to the darkest side of things.’

She added that having flies in your home could also be a sign it’s haunted by demons.

‘Its more severe than being in a bad mood or having nightmares,’ she said.

‘I work with kiddies with night terrors. Being able to stop that is amazing, because they are being attacked by a dark energy in the dream stage,’ she added.

Kelly explained she believes in guardian angels and that demons exist alongside angels.

‘Like a Dan Brown novel,’ Phil pointed out, referencing Angels and Demons published by the Da Vinci Code author in 2000.

Kelly went into a bit more details explaining what the process works.

‘My job is to go in, what we do is we collect it, it all goes back to my life, the demons, elementals, whatever is in the house.

‘My guys, they collect it and take them back to my house, and when I go home, I open the gates, take the dark energy over,’ she explained.

A fascinated Phil interrupted Kelly to ask her if she has neighbours and whether they mind her opening the Gates of Hell.

She said she opens them ‘five to six times’ a day and said it is a ‘pretty normal thing’ for her.

She explained there were several Gates of Hells around her house.

‘I open the gates, take them down.’

People were not impressed with Kelly’s claims. Some joked she could clear their workplace of the demons that were there

The professional demonologist said demons always come back up from hell anyway because of people using ouija boards.

Holly asked Kelly if she felt scared and brought up a past interview where the demonoligist had admitted a demon left her on the brink of suicide.

‘It’s really serious stuff when you get attachments, because the objective of a demon is to take you out, as soon as you take your life, they can drag your soul down, so that is their objective,’ she said.

She explained she uses several tactics to stay safe from demons, including crystals in her pockets, a pendulum and a rosary beads, as well as several protective necklaces around her neck.

She said she can see demons, but reassured Phil and Holly that she couldn’t see any in the This Morning studio because she had ‘cleared the building’ earlier.

She said she is contacted by people from all walks of life and teased some of them are even celebrities.

Phil asked her whether she thinks it could be dangerous for people who have mental health issues to call her instead of a medical professional.

‘if you are someone with mental health issues and are really struggling in some way, rather than seek professional help for it, you might think I got a demon stuck on my back,’ he argued.

But Kelly claimed she’s worked with people who had been working with psychologists and therapists and is more efficient.

She said people could not get rid of demon themselves, but added you could protect yourself by using angels and focusing on the light side.

She said people are more likely to conjure bad spirits around Halloween and pleaded with people not to use Ouija boards because they are so dangerous.

Viewers were not convinced by Kelly’s story, especially her claim that she opens the Gates of Hell several times a day.

‘Can this woman please cleanse my work place. So many demons there,’ one said.

‘How do they get the demons to her house once they’ve collected them? By car? Uber,’ one asked.

‘Everytime my relatives come over I open the gates of hell too,’ one quipped.