By refusing to bow out like Richard Nixon, desperate Donald Trump is doing nothing to help America heal, writes JUSTIN WEBB

When the end came for Richard Nixon, it was swift and sure. In August 1974, the 37th president of the United States realised that he had no choice but to resign from his country’s highest office.

Nixon was hysterical and drunk. He knelt and prayed with Henry Kissinger, his secretary of state. Kissinger hugged him awkwardly and told him history would be kind, but still he had to go.

To leave office before the end of his term was, Nixon said, ‘abhorrent to every instinct in my body’. But, he went on: ‘As President, I must put the interests of America first.’

In a solemn address from the Oval Office, he added: ‘I hope that I will have hastened the start of the process of healing which is so desperately needed in America.’ 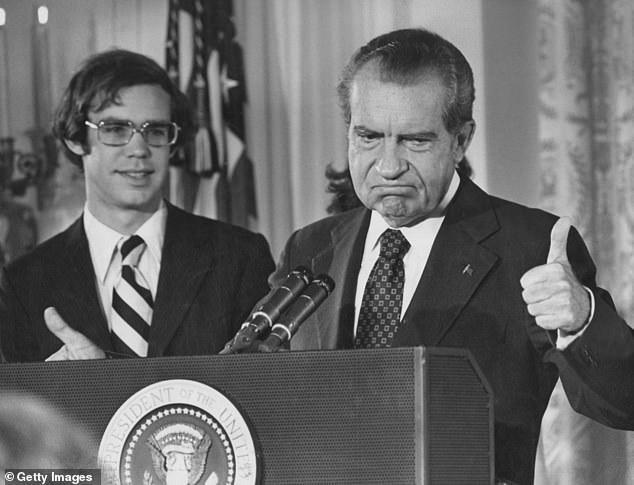 Forty-seven years later, many believe an even more divided America needs to heal again. Yet Donald Trump is doing nothing to help the process – quite the opposite.

Having lost an election, and with multiple credible allegations of wrongdoing made against him, he is clinging on to office: cajoling, threatening, gathering allies, attacking enemies, fighting with all the energy he can summon.

This week brought a fresh bombshell: a tape of him telling the Republicans who run Georgia that he expects them to overturn Joe Biden’s victory in that state.

An outrage, according to the Democrats. And possibly criminal: putting pressure on an election official is a serious offence.

But here it gets difficult for them – and dangerous for America. The reason the situation is so perilous for the nation – arguably more dangerous even than Watergate – rests on two things. 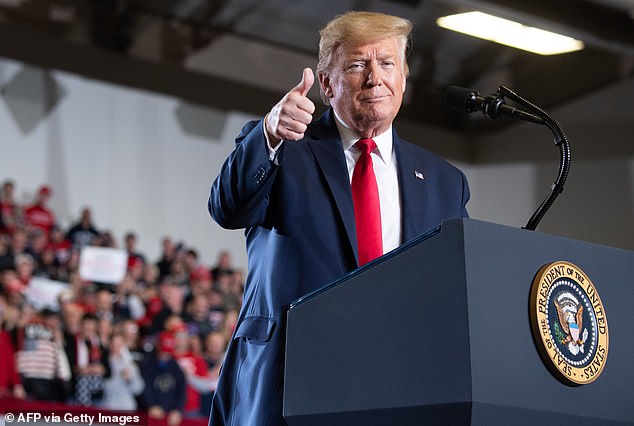 Defiant: Donald Trump is refusing to bow out like Richard Nixon. He is clinging on to office: cajoling, threatening, gathering allies, attacking enemies, fighting with all the energy he can summon

First, the considerable support that many ordinary voters have for Trump, having so recently turned out in huge numbers to give him a second term.

And second, the fact that – unlike in Nixon’s day – some Republicans in Congress are siding with the outgoing President and refusing to accept the result of the election he lost.

By the time Nixon reached the end, his approval rating was around 27 per cent. In contrast, Trump’s rating is about 42 per cent, which is roughly where it has stood for most of his presidency.

Most Americans who liked him are sticking with him. Many have given up believing what the media tell them. Some live in a weird make-believe world in which Trump did win. To them, he is heroically resisting the subversion of democracy, instead of causing it. 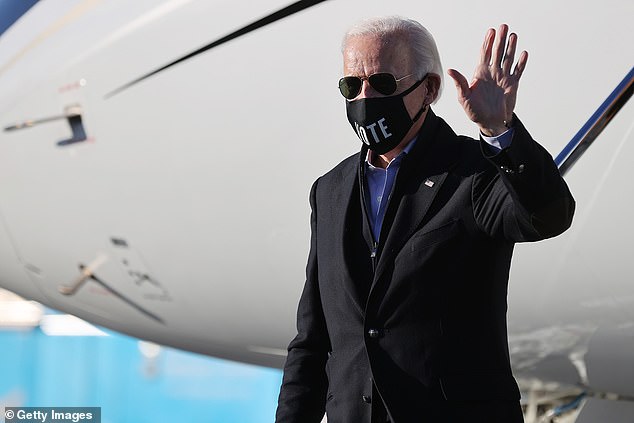 Pictured: President-elect Joe Biden. A joint session of Congress will meet tomorrow to count and then confirm the electoral college votes: the final step in formally certifying Mr Biden’s win

On top of this, America is faced with a situation unprecedented in its modern history: the failure of some of the country’s own lawmakers to accept the election result, as well as their endorsement of Trump’s unfounded conspiracy theories.

A joint session of Congress will meet tomorrow to count and then confirm the electoral college votes: the final step in formally certifying Mr Biden’s win.

At that session, an almost unbelievable scenario will take place. Many Republicans in the House of Representatives and at least one in the Senate will object and try to stop the result being agreed.

In doing so, they will essentially be arguing that American democracy has collapsed. They do not, cannot, will not accept the result of a fairly fought and independently verified ballot, tested in the courts. Never in modern times has this happened. These Republicans will lose the vote – but they have set out their stall.

And the only possible reason they can have done so is in the belief that Trump is going nowhere. Perhaps they seriously think he will refuse to leave the White House – and would be right to do so.

This weekend, all ten living former secretaries of defence issued a warning against any move to involve the military in pursuing claims of election fraud, arguing that it would take the country into ‘dangerous, unlawful and unconstitutional territory’.

Now why would they do that? Might Trump use the army or the National Guard to try to remain in power? Would some senior Republicans back him in doing so?

It may seem bizarre, even terrifying to many Americans.

But the fact is that by raising their concerns, the ex-defence secretaries are suggesting there is a real possibility of a coup: there is no other word. 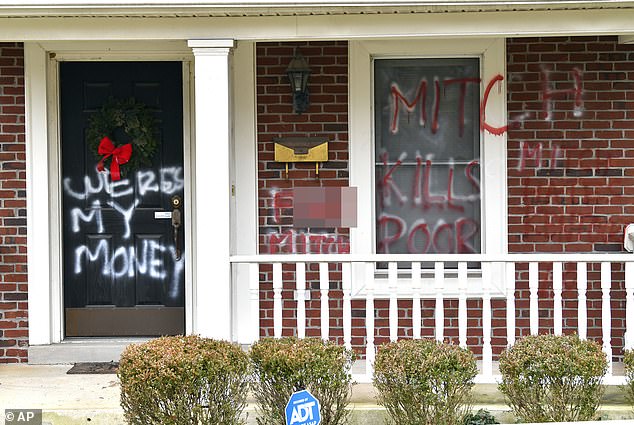 No wonder the mood has turned so ugly. At the weekend, as Congress discussed a relief measure to help Americans whose finances have been battered by Covid, the front door in Kentucky of Senate Republican leader Mitch McConnell, who has accepted Biden as president, was spray-painted ‘WERES MY MONEY’ and ‘MITCH KILLS THE POOR’. 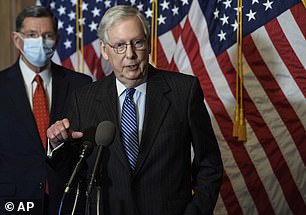 So much for healing.

Even the most optimistic take on the coming days is pretty grim. Let us assume that Trump leaves the building on January 20, the day of Mr Biden’s inauguration.

The immediate danger passes but is replaced by something just as damaging in the long term: a kind of chronic, deteriorating illness instead of a political heart attack.

This might be the scene: Trump withdraws from Washington DC but takes his court, the party loyalists, with him to his home in Florida, the Mar-a-Lago resort he likes to call the ‘Winter White House’.

Like a deposed medieval king refusing to accept the legitimacy of a new monarch, Trump would subvert the Biden presidency by calling into question not his opponent’s policies, but his right to be in charge at all.

Such a nightmare could last years, ending in Trump – or one of his family – running again, and with the Republican party remodelled as a praetorian guard for The Donald. 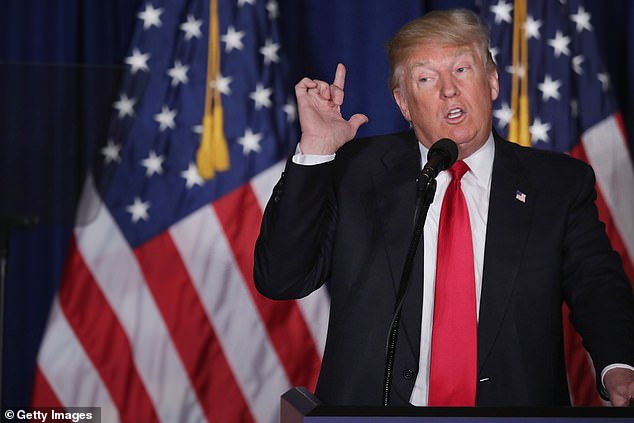 Might Trump use the army or the National Guard to try to remain in power? Would some senior Republicans back him in doing so?

This is why the current situation may be far more serious than Watergate. Nixon, accepting he had done wrong, faded away.

Trump gives every impression of believing that he has done nothing wrong, that remaining in office would be popular.

The leaked phone call with the Republican brass in Georgia is striking because he sounds so certain that he really has won.

Where a cunning politician might scheme behind the scenes, with Trump there appears to be no calculation. This is not a political ruse. He seems genuinely to believe the things he says.

No wonder so many Americans are worried what he might do next, and about the dangers that surface if his supporters stick with him and demand his reinstatement.

The assumption has always been that the man is a joke: in the end, with the right deal – perhaps a chat show and a comprehensive legal indemnity – he could always be bought off.

Suddenly a new reality is dawning. Trump is serious. He is going for broke. One of the first biographies about him is entitled Never Enough! Perhaps, then, America should have seen this coming.