AN INFAMOUS sculpture of Donald Trump's face carved into Mount Rushmore has been pictured for the first time – sitting on a shelf at his office in Mar-a-Lago.

Trump has long been reported to have a small statue of the famous monument including his distinctive features which was gifted to him South Dakota governor Kristi Noem. 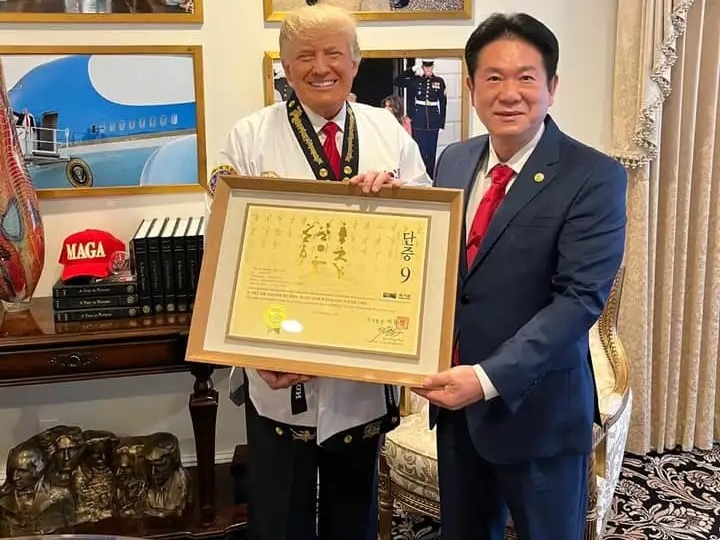 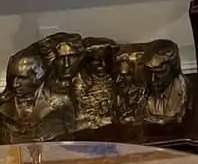 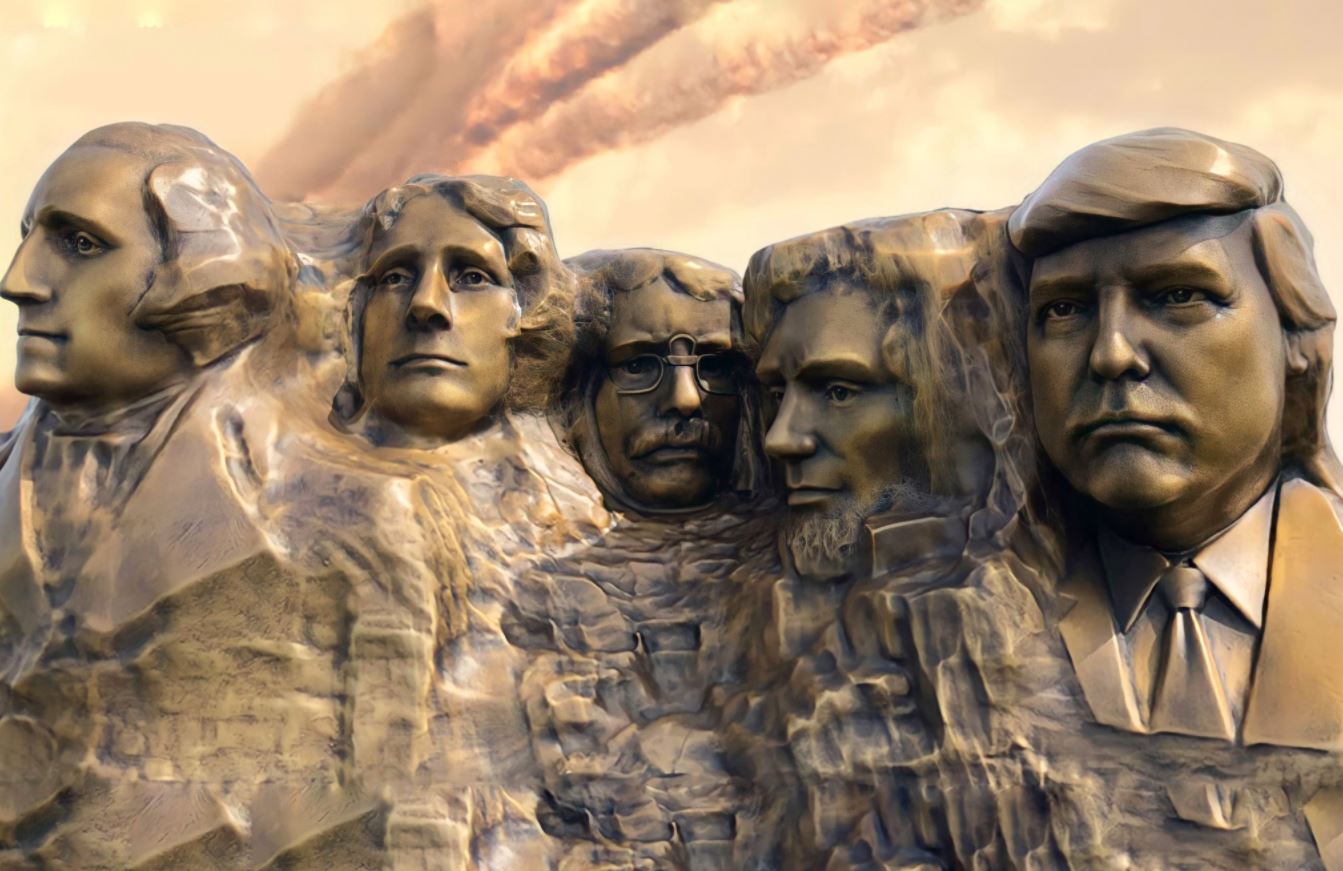 Mock ups of the statue have previously been released – but now for the first time the object itself has been pictured.

The 75-year-old can be seen beaming in a posed up photo as he is granted an honorary black belt by the World Taekwondo Headquarters.

Off to the left of him, sitting on the bottom shelf of a console table is the mini version of the monument.

And then bolted on the end next to The Great Emancipator is a new fifth addition on the rockface – Trump.

You can clearly see visible his famous hair and a sculpted version of collar and tie.

The statue features below a shelf which includes a MAGA hat and under hanging pictures from presidency, such as meeting North Korea dictator Kim Jong-un.

It is believed to be the first time the infamous sculpture has been pictured in Trump's possession amid rampant speculation.

And it has been reported that Trump himself is quite fond of the idea of him one day joining Mount Rushmore.

And the 45th president earlier this year raged he would be on it already if he was a Democrat.

Trump was reportedly gifted the 1ft wide and 27 inch tall bronze sculpture by Governor Noem as he visit the monument to give a speech on July 3, 2020.

It is understood the Trump is a slightly larger than the other presidents and that the sculpture was paid for by private donations.

Sculpting team Lee Leuning and Sherri Treeby – both Trump supporters who voted for him in 2016, 2020 and plan to in 2024 – created the work for Governor Noem.

I started laughing, He wasn’t laughing, so he was totally serious

It was reported that the White House contacted the governor's office to enquire about him actually having his mug added to the monument in the Black Hills.

His team pushed back and Trump himself branded it "fake news" – but it seems the President was not opposed to the idea.

Trump tweeted: "Based on all of the many things accomplished during the first 3 1/2 years, perhaps more than any other Presidency, sounds like a good idea to me!

Governor Noem claims that Trump had told her it was his "dream" to be carved into Mount Rushmore.

"He goes, ‘Do you know it’s my dream to have my face on Mount Rushmore?," she said.

“I started laughing, He wasn’t laughing, so he was totally serious.” 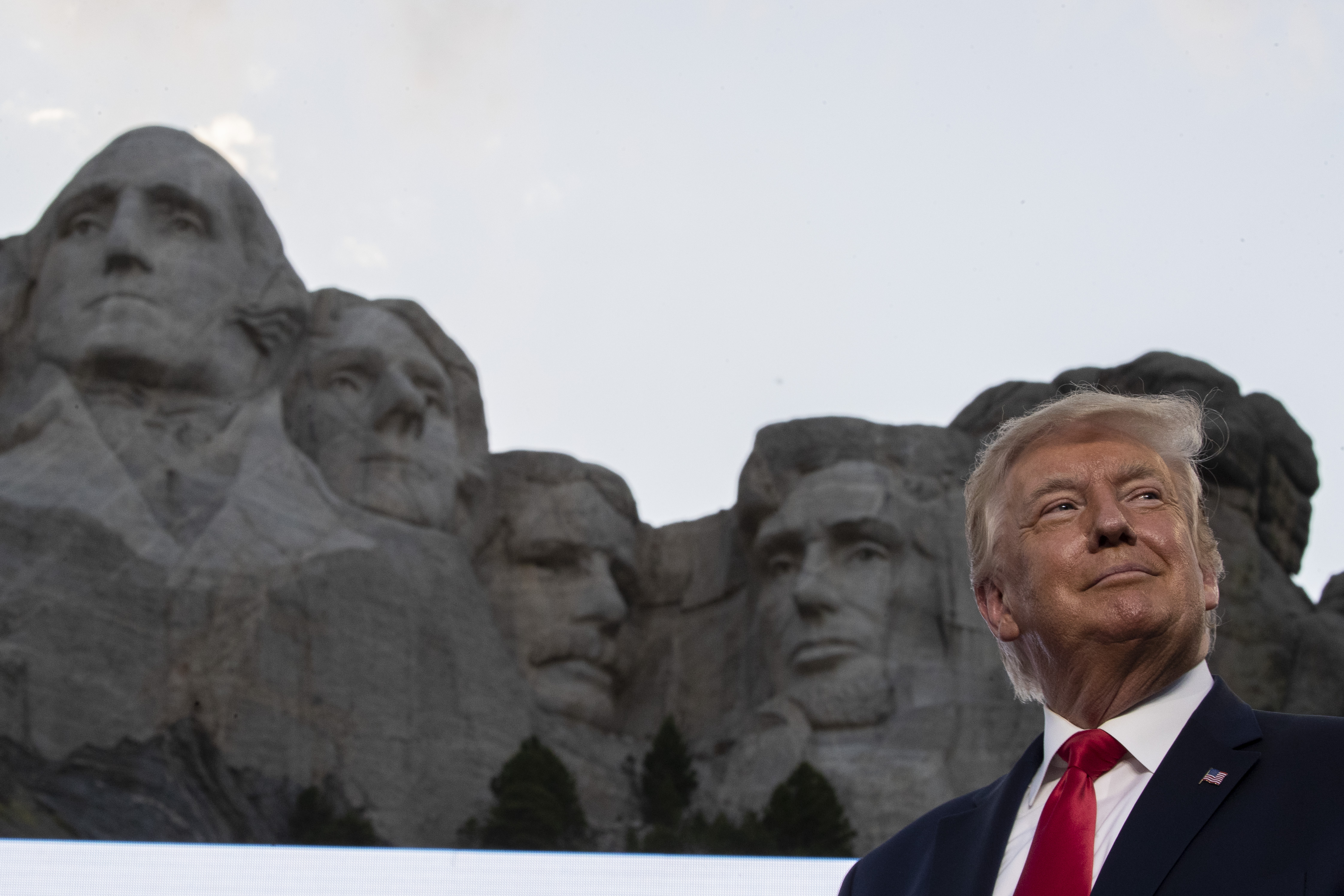 The four presidents featuring on the mountain were chosen by sculptor Gutzon Borglum in the 1920s.

They were supposed to represent the four phases of American history so far – from independence to the industrial revolution.

And the original plans actually included the presidents from head to waist, until the funding ran out.

It is believed the land is not stable enough to build a fifth face.

But there has been discussion about another addition with contenders such as Ronald Reagan, JFK and Franklin D. Roosevelt.

Trump's predecessor Barack Obama joked about being added, but quipped his ears were too large.

And in a 2018 survey by the The New York Times, Roosevelt – who led the US through World War 2 – was selected as the favourite.