It has been exactly a month since Harry and Meghan, the Duke and Duchess of Sussex, announced that they were stepping back as senior members of the Royal family. For the past eight weeks, column inches have racked up about the "Megxit" bombshell and its impact on the institution of monarchy.

Yet amid all the hysteria and hullabaloo, one of its most important members has been serenely going about the business of keeping calm and carrying on. 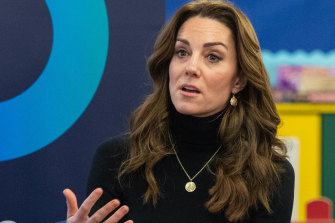 The Duchess is set to increase her profile as a parenting advocate.Credit:Getty Images

Until now, this kind of understated behaviour may have been most closely associated with the Queen, but it is her modern-day equivalent, the Duchess of Cambridge, who has been quietly putting duty first with increasing visibility.

A recent UK tour to launch her landmark survey on early childhood, combined with well-received visits to Wales, fill the void left by her brother- and sister-in-law.

Yet, as has ever been the case with the middle-class girl from Bucklebury who married into the Firm almost a decade ago, that would be to underestimate a woman who has never made a show of her royal role – until now.

Having discreetly spent the past eight years beavering away on the causes closest to her heart, Kate has finally found her voice and is determined to use it. No longer willing to be seen but not heard, sources say she is now ready to commit the rest of her working life to raising awareness of the importance of childhood – and its impact on adult life.

Kate has finally found her voice and is determined to use it. No longer willing to be seen but not heard.

Although she never took the credit for being the inspiration behind the Heads Together mental health campaign spearheaded by William and Harry, having witnessed its extraordinary impact, there is a sense that the Duchess has finally realised just how much she is capable of.

"The Duchess has worked quietly away in the background for years," said one well-placed royal insider, "and now she knows that people want to hear from her." No longer as fearful of public speaking, and fast carving her own path out of the shadows, Kate's new landmark online survey, "5 Big Questions on the Under Fives", will mark the start of decades more work on the subject, according to aides.

"It's much easier to speak out when you know what you're talking about and passionate about your subject," added the insider. "She has become an expert in early years learning, she understands the science and is respected in the sector because she has spent the past eight years working it out. But she also wants to find answers. This is about evidence-based research." The first results of the childhood survey are due next month.

She is now ready to commit the rest of her working life to raising awareness of the importance of childhood.

With two of the so-called "Fab Four" poised to set up their own projects in North America, the focus for the Cambridges will not only be on putting duty first, but in a non-partisan, extremely effective way. As one observer noted: "It is a bit of a paradox, having such a naturally introverted person in such a high-profile position. I think that's what people find endearing about the Duchess. She's not a showy person."

Of course, accession may still be decades away, but preparations for the royal couple to become the next Prince and Princess of Wales were already well under way before Harry and Meghan's move to Canada.

And while efforts had previously been ploughed into elevating the status of the man who would be king, there is a new, and arguably even more compelling, project now fully in progress at the Palace: the advent of Queen Catherine.

So much so, in fact, that a team of academics have been drafted in to help the mother-of-three shape her royal future – with input from the highest echelons of government and even the security services.

Likened to a modern-day version of the Way Ahead Group, set up to rebuild the monarchy in the aftermath of the Queen's "annus horribilis" of 1992, the Duchess's steering group of experts has informed her focus on early years learning and helped her to grow in confidence in her royal role.

Having had three children in swift succession – and with Prince George, six, and Princess Charlotte, four, in school, and Prince Louis turning two in April, Kate's priorities have shifted.

According to one well-placed source: "Over the last 12 months, they have realised the potential power of their platform. They understand that by launching these long-term projects, they can genuinely make a big difference. They've been told clearly the impact that they can have if they pick the right spaces – things they care passionately about."

Just this week, we have seen William discuss diversity at the Baftas, and Heads Up, his mental health initiative that tackles the issue through football, has been well received. As with Earthshot, described by one aide as "the biggest thing the Duke has ever undertaken", it is about saying "we can do this", rather than "this is too daunting", a source said.

"The Royal Foundation has been going for 10 years now. What they want to do is a smaller number of things on a bigger scale. For the Duchess, the early years work is something she will lead for the rest of her life."

"A hell of a lot of responsibility rests on their shoulders and they've just got to get on with it," says royal author Phil Dampier. "I think they are both resigned to spending the next 30, 40, 50 years as heavyweight royals."

Standing alongside his wife, many royal watchers noted how much more publicly demonstrative William had become towards Kate. During the reception he was uncharacteristically nostalgic, saying: "The African continent holds a very special place in my heart. It is the place my father took my brother and me shortly after our mother died. And when deciding where best to propose to Catherine, I could think of no more fitting place than Kenya to get down on one knee."

It is this kind of gentle encouragement and support that is intended to propel his wife to the next level, where her dependability turns into the kind of "soft power" that can affect real change.