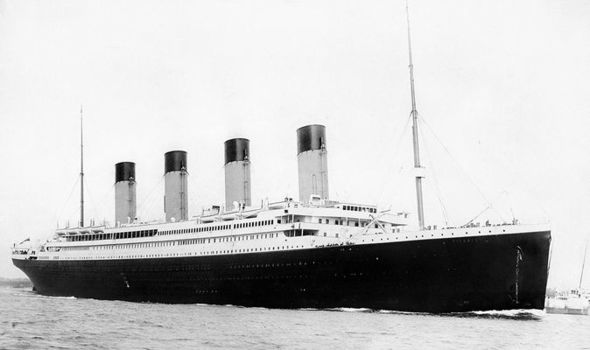 But a dramatic new book explodes that fantasy. “Every soul on the Titanic could have been saved,” says historian William Hazelgrove, author of One Hundred and Sixty Minutes: The Race to Save The RMS Titanic, published this month.

“The myth says the Titanic was alone out on the Atlantic, but two ships – the SS Californian and the SS Mount Temple ‑ were so close that they saw the Titanic sinking, only failing to act out of cowardice and incompetence.

“Once the Titanic’s hull ruptured the ship was doomed, but its passengers and crew were not. They could all have been rescued, and the death of 1,517 was a terrible human failure.”

Hazelgrove explodes the Hollywood fiction that the Titanic’s sinking displayed the best of British sang froid, gallantry and chivalry as millionaires such as the Guggenheims and Vanderbilts and English aristocracy put their wives and children in lifeboats before settling down for a last cigar and brandy, while the Titanic’s Captain Edward Smith went down with the ship urging his crew to stand fast and “Be British!”

“There was immense hubris in thinking the Titanic indestructible, even after it began taking on water,” says the author.

The RMS Titanic, on its maiden voyage from Southampton to New York, was considered unsinkable. At 46,328-tons, 882 feet long, accommodating up to 3,500 people, it was the biggest ship ever built, a floating palace with a grand staircase beneath a glass dome, luxury lounges modelled after Versailles, opulent cabins, elegant restaurants, libraries, a gymnasium, swimming pool, Turkish baths, squash court, smoking rooms and a palm court.

It was racing at 22 knots, poised to set a new Atlantic crossing record, when it struck an iceberg at 11:40pm.

“Rescuers had just two hours and 40 minutes before the Titanic slipped beneath the icy Atlantic,” says Hazelgrove. “By 2.20am the following day it was gone.”

More than a dozen ships, including the Birma, Frankfurt, Virginia, Baltic and Olympic, changed course and began racing toward the sinking vessel ‑ but the two closest ships held back.

“Cargo liner the SS Californian, barely ten miles distant, could have been alongside the Titanic in under an hour, but didn’t move,” says Hazelgrove.

“Its wireless operator went to bed 20 minutes before the iceberg struck, and the crew slept unaware of the disaster unfolding.

“Officers on watch aboard the Californian woke Captain Stanley Lord and told him a nearby ship was firing distress rockets, but he refused to sail through an ice field at night, and went back to sleep.”

The Californian’s crew watched helplessly as the Titanic went down. “Even after they woke the radio operator at 4am and confirmed the sinking, Captain Lord refused to sail through the field of icebergs at night. It was an outrageous failure of courage.”

The SS Mount Temple, a cargo steamship carrying 1,466 people, was the first vessel to pick up Titanic’s distress signal at 12.15 a.m. Less than 50 miles away, it could have been alongside the Titanic in two hours, saving everyone.

Initially, Captain James Moore sailed full-speed toward the Titanic, but on reaching the ice field he stopped, refusing to risk a journey through icebergs.

“Passengers and crew watched in horror as the Titanic sank,” says Hazelgrove. “The crew even discussed a mutiny to take over the ship and sail to the Titanic’s rescue.”

But the Mount Temple would not move. Captain Moore later told an inquiry: “God knows I did all that I could.”

Says Hazelgrove: “The truth is the Titanic could have been rescued by the Mount Temple, but Captain Moore simply didn’t have the courage to enter the ice field.”

Aboard the Titanic, chaos reigned. “Many passengers didn’t believe the Titanic could sink, so there wasn’t much panic initially,” says the author.

“But by the time the third-class passengers were allowed up top most lifeboats had gone, and pandemonium erupted.

The crew shot up to 12 people.” First-class passenger Dr Washington Dodge recalled: “Some of the passengers fought with such desperation to get into the lifeboats that the officers shot them and their bodies fell into the ocean.”

Says Hazelgrove: “As for the band playing, that was a myth. Surviving passenger May Futrelle said the band ‘Could barely be heard over the roar of steam escaping from the boilers,’ sounding like 100 locomotives. With the ship tilting 45 degrees the band would have slid off the deck.

“It was far from civilised or orderly. With most lifeboats gone, gallantry and chivalry gave way to a fight for survival.” The lifeboats, capable of holding 1,178, were loaded with only 705 people.

“A colossal demonstration of incompetence on the part of the crew,” says Hazelgrove. “There was room for 473 more people. One boat holding 12 people was designed for 40. And when 1,517 fell into the icy Atlantic, the lifeboats could have picked up hundreds.

Instead, they watched them freeze to death just a few yards away.”

The water temperature was minus 2 degrees Celsius. “Most lost consciousness in 15 minutes and died in 30,” says the author.

“None of the survivors in lifeboats rowed to their rescue, afraid of being overwhelmed. Only one boat ventured back 40 minutes after the sinking and found only four survivors.”

After dawn the Californian eventually headed for the Titanic wreckage, but even then took a circuitous route around the ice field.

The Mount Temple followed suit. Yet those in lifeboats were far from safe, many dying from hypothermia, and speedy rescue remained imperative.

“The one ship that went to the Titanic’s aid, rescuing hundreds of passengers, was the RMS Carpathia, 58 miles distant, whose Captain Arthur Rostron sailed full-speed, zig-zagging through icebergs,” says Hazelgrove.

“He posted multiple look-outs and reached the wreckage around 3.30am, hours before the Californian.” A US Senate Committee later concluded that if the Californian had responded to the flares,

“She might have saved many if not all of the lives that were lost”, and blasted her captain for “negligent indifference”.

Hazelgrove adds: “If the Californian or the Mount Temple had arrived before the Titanic sank, either could have rescued everyone.

“Unlike the movies, the sinking of the Titanic wasn’t about heroism or romantic idealism, but about self-preservation and human failure that resonates to this day.”

One Hundred and Sixty Minutes: The Race to Save The RMS Titanic by William Hazelgrove (Prometheus Books, £21.98) is out now