Ben Higgins and Jessica Clarke’s wedding is just over a week away and Bachelor Nation, prepare accordingly — because there are so many Bachelor and Bachelorette alum set to attend, the season 20 lead couldn’t even name them all.

“I’m going to miss people. I know it because I always do,” Higgins, 32, told Us Weekly exclusively while promoting his partnership with Rudi’s Rocky Mountain Bakery. “My cohost of ‘Almost Famous’ Ashley Iaconetti, my former cohost and now the sole host of the Bachelor Live on Stage, Becca Kufrin, [are coming]. Jared [Haibon] will be there, Thomas [Jacobs] will be there as well.”

Higgins, who noted that the nuptials will be the first time he meets Kufrin’s new man, Jacobs, also named Dean Unglert and Caelynn Miller-Keyes, Chase McNary and girlfriend Ellie White, Blake Horstmann and Elyse Dehlbom, and Becca Tilley as guests. 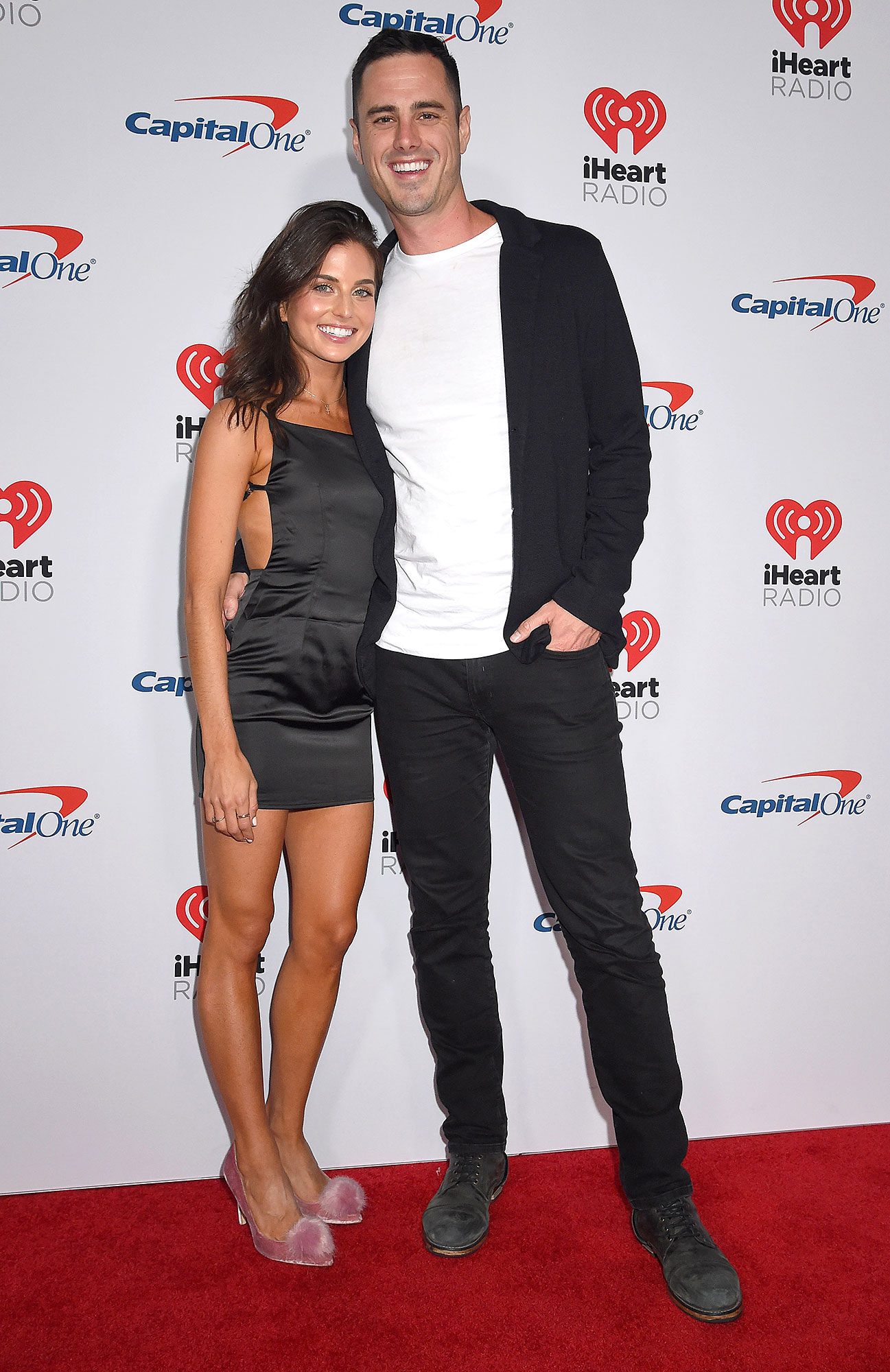 “Wells Adams is an usher in my wedding. He’s the only Bachelor alum that’s an usher. I love Wells. We became really good friends over the years,” Higgins continued. “Nick Viall will be there with his girlfriend, [Natalie Joy]. Chris Soules will be there. Shawn Booth will be there.”

Bachelor Nation Stars Who Found Best Friends on the Shows

After Us pointed out all the potential ex run-ins based on his guest list, Higgins noted that Tilley was part of his season and Soules’ season 19. When asked about Kufrin and Horstmann, he acknowledged that they’ve already seen each other since their “little escapades” following season 14 of The Bachelorette.

“Unfortunately, Kaitlyn Bristowe’s on tour right now for her podcast so her and Jason [Tartick] can’t be there. They have a Boston show that night and that is important to them,” Higgins continued. “There’s a lot of people that, you know, Jared, myself, Shawn, so she would have had, like, a reunion.”

Someone else who made the guest list but won’t be in attendance? Former Bachelor host Chris Harrison, who recently announced an engagement of his own to girlfriend Lauren Zima.

“I’m super happy for him. Lauren Zima was the very first interview I ever did when I was the Bachelor, so we have a long history and we became good friends from there. She’s close to my age and she was new to this and I was obviously new to this. And we were like, ‘Let’s make this the best for both of us,’” Higgins explained. “Chris has had a huge impact in my life [and] always will be a friend of mine. They, unfortunately, cannot make it to the wedding. I wish they could, but we’ve kept in contact.” 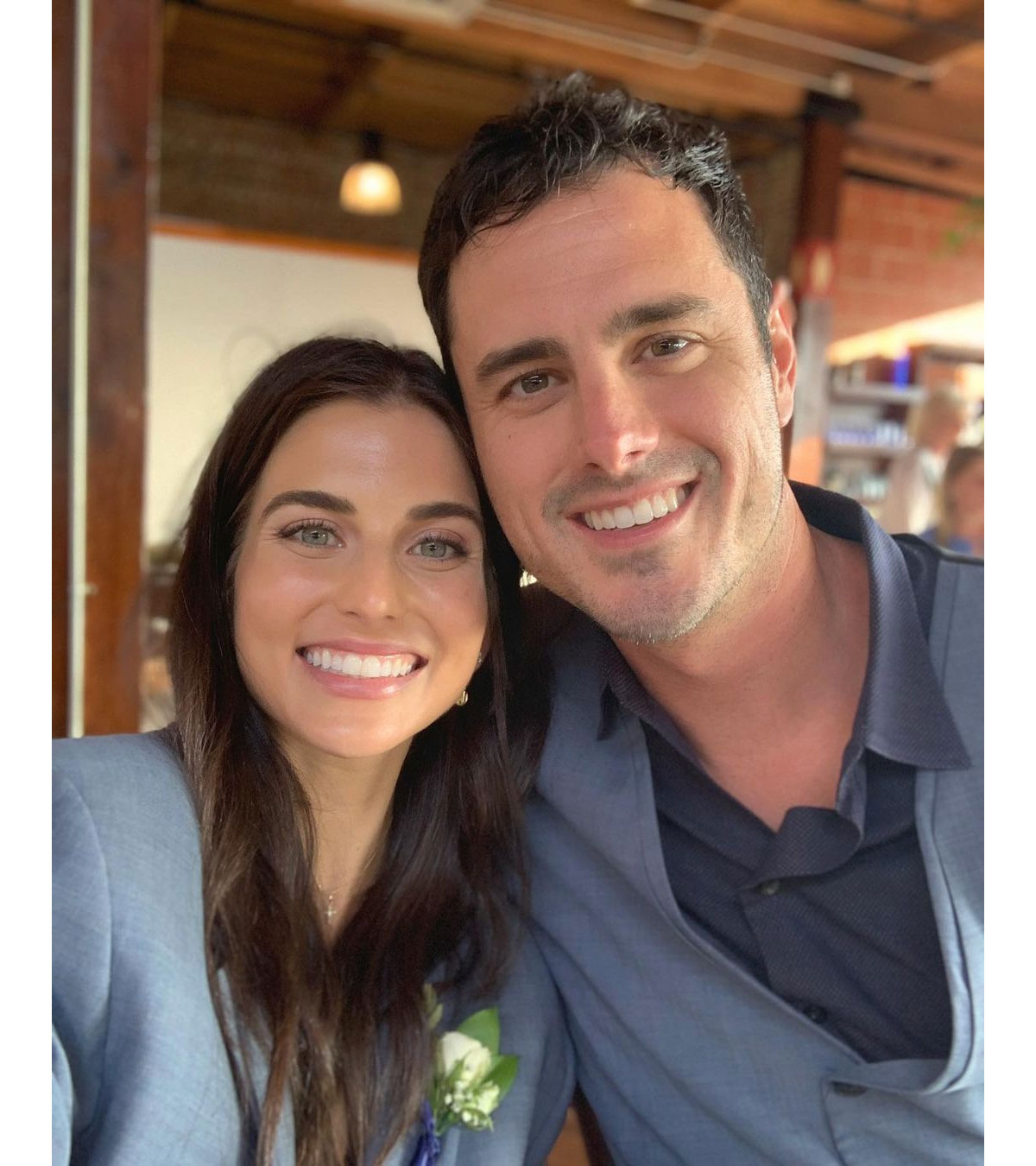 After three years together, Higgins and Clarke will wed in Tennessee on Saturday, November 13, with three officiants — Higgins’ pastor, Clarke’s pastor and reality TV personality’s parents’ pastor and best friend — who are “going to take turns” during the “fairly traditional ceremony” before the reception.

“We want it to be a party as soon as you walk through the door. We’re not having a sit-down dinner,” Higgins said, noting there will be “COVID-19 friendly” food stations with including pizza, wraps, chips and salsa and nachos. “We will do our traditional dances, but we wanted people just moving and grooving for the reception and one of the big catalysts to that was I believe that we have the best wedding band in the world — Taylor Pace Orchestra.”

Ben Higgins’ Season 20 of ‘The Bachelor’: Where Are They Now?

Leading up to the wedding day, which was postponed amid the COVID-19 crisis, Higgins is focused on his partnership with Rudi’s Rocky Mountain Bakery. 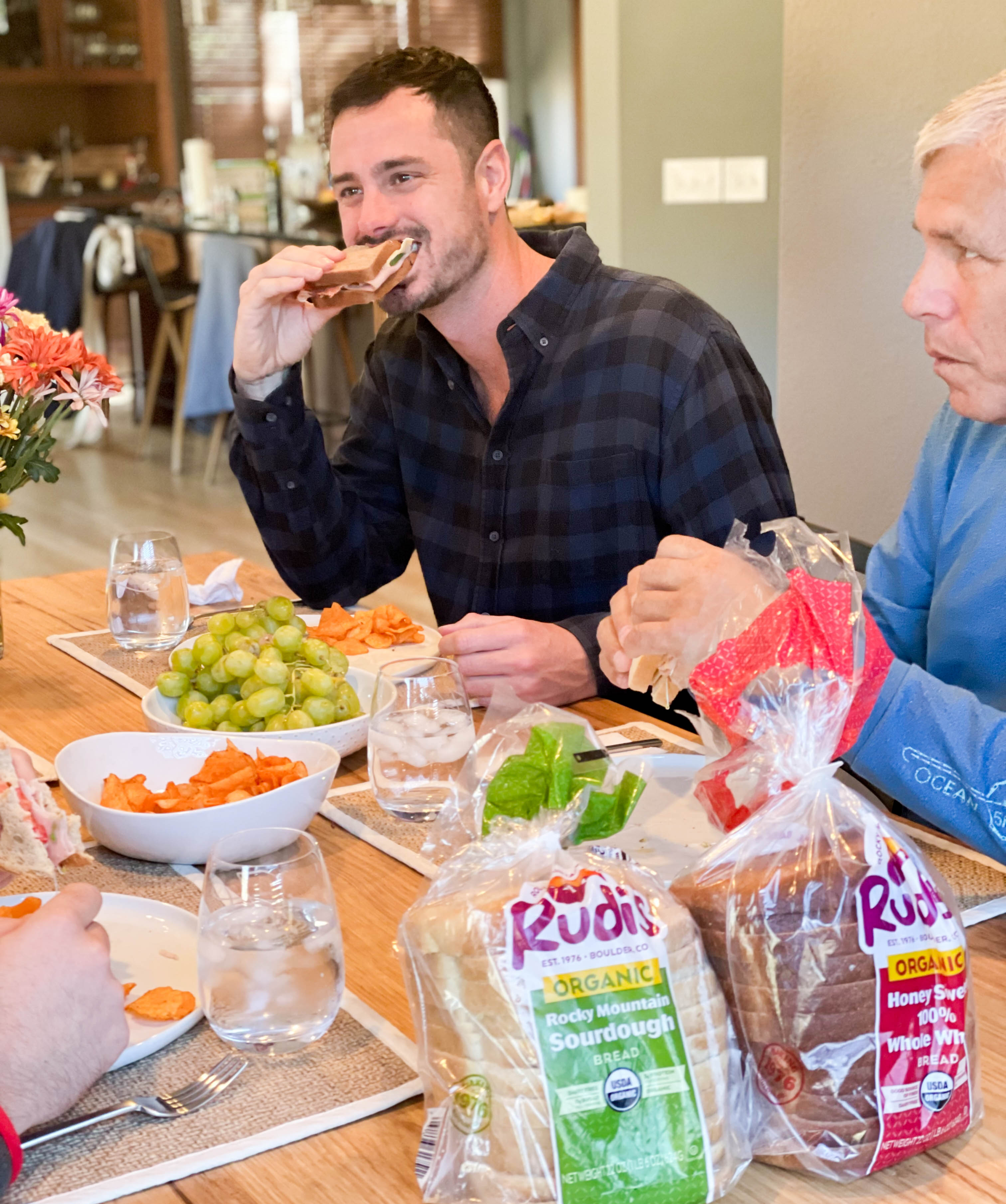 “We know what the last few years, there’s been a lot of isolation, a lot of pushing aside. … When I’m breaking bread with friends or family around the table, growing up, you know, I enjoyed it. I enjoy that now. And this Slice of a Home campaign is really about that for Rudi’s. People love to connect over meals and love to share these meals together,” Higgins told Us of the Colorado-based company, which he noted is a leader in small-batch, organic baking. “One of the cool things that I got to do for this campaign, I made a sandwich. … It’s a California club. It has incredible flavor, really great texture, but I started a hack with it, I guess you would say. I grow my own tomatoes and basil here now in Colorado. I use that for my sandwiches and for this sandwich and it really brings a whole freshness to it. There’s a little pride that I have when my buddies bite into a sandwich or my fiancée bites into to a sandwich that I know I have a part in growing and fostering.”

The partnership also includes a giveaway, which ends Monday, November 8, to win a Rudi’s Slice of Home mailer, a toaster and a $100 Whole Foods gift card.

“You can tag a friend [in my Instagram post] for the chance to win a Rudi’s Slice of Home mailer which I’ve received. Trust me, it’s a great thing,” Higgins said. “[And make sure] you’re following Rudi’s Organic on Instagram and myself to enter.”