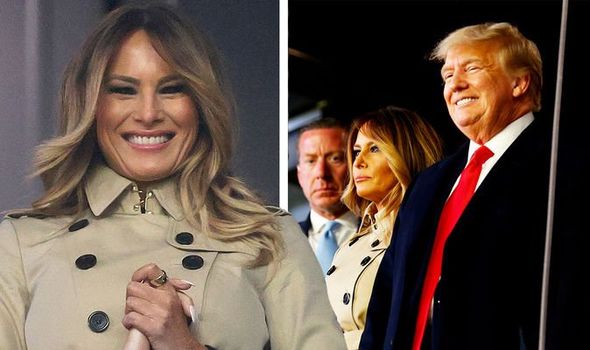 Melania Trump appeared alongside husband Donald Trump for the first time since April. The former First Lady and former President of the United States were photographed attending and watching a World Series baseball game. Express.co.uk spoke to body language expert Judi James and she said Melania was “masking negative emotions behind a smile of social politeness”.

Pictures from the event saw Trump and Melania smiling from the stands.

At one point for the former president gestured and pointed to spectators who waved.

“They suggest a professional meeting of minds in terms of any ambitions or desire to still perform as a political power couple and the twinned power poses do come very much from their latter time in the White House, when Melania was taking a much more active role in public as First Lady.

“This is her semi-military look, standing upright and to attention with her arms down at her sides and it’s a look she rotates rather than breaks as she turns to talk to people beside her.

“Her smile is equally high-powered and supportive in a very First Lady manner.

“Although the clip where it drops shows the kind of contrast moment that has always had people doubting her authentic emotions,” Judi said.

Melania’s smile fading was a moment caught on the television cameras around the stadium.

Trump was giving someone a double thumbs up and initially Melania was smiling before turning her body and head to the other side and those watching suggested she “rolled her eyes” at her husband.

Speaking about this moment further, Judi explained: “It’s been easy to forget Melania’s technique of ‘facial expression flashing’ since she stepped down from the role of FLOTUS but this example looks like a stunner, especially seen in slow-mo like this.

“Her lightning smiles at Donald were beaming grins of support, approval and maybe even love but then they would drop so quickly from her face once her husband’s gaze had turned away that they gave the impression of being acted.

“It’s an almost unique technique that even people who are masking negative emotions behind a smile of social politeness rarely use as it tends to rebound and make them look (and feel) fake and ‘two-faced’.

“Pass a neighbour you dislike in the street and you will probably still retain any social smile you performed for several moments after walking past to allow it to die after what will feel like a natural time as we don’t even like to appear two-faced to ourselves, when no-one else is looking,” she continued.

“Melania used this look so much in public despite voicing her love and loyalty for her husband that it could be an unconscious trait rather than a public signal of exasperation or dislike.

“Maybe the pitch-perfect smile is an effort for her if she still feels inner shyness or awkwardness and it becomes difficult to sustain for more than a second or so.

“The fact she is still with Donald when so many commentators claimed she would be straight off to the divorce lawyers once they quit the White House would suggest this is some kind of body language blip rather than an open display of hostility or disapproval.”

It was the first time Melania has been seen in public since July, when she was spotted leaving Trump Tower in New York City with son Barron.

And Saturday night’s appearance was the first since being pictured together last Easter.

This is not the first time Melania’s facial expressions have changed quickly.

Most famously at Trump’s 2017 inauguration, just before taking the oath of office, Melania’s look turned from smiling broadly at her husband to one of severity.

There have been several other occasions when the former president has attempted to hold his wife’s hand, only to be swatted away.