I Trumped Melania! She’s the First Lady’s double – but as ALICE SMELLIE proves, you can get a millionaire look without The Donald’s wallet

Ever since Donald Trump’s political star ascended, I’ve started getting funny looks from friends and family.

Not, I hasten to say, because I’ve become a Trumpette but because they’re convinced I bear more than a passing resemblance to his wife Melania.

On paper, Mrs Trump and Mrs Smellie have little in common. Clearly, only one of us is married to the leader of the free world, while Mr Smellie works in finance.

And while Melania is a statuesque 5ft 9in, even standing up very straight I only reach 5ft 5in.

While I may not always relish the comparison, one thing I would like to share with Melania is her wardrobe — as this week’s state visit proved, the First Lady always looks impeccably stylish, with not a hair or hemline out of place.

While I’d love to dress like her, with some of her outfits costing north of £50,000 a time, there’s little chance of me picking up the same pieces.

But perhaps this budget Melania could also imitate her wardrobe for a knock-down price? After searching the High Street and online retailers, I discovered it is possible to look positively presidential without breaking the bank.

All I needed to complete my transformation was a fake Donald all of my own. So with the help of a leading lookalikes agency, I was ready to go.

Here’s how I got on — with authenticity ratings out of five . . . 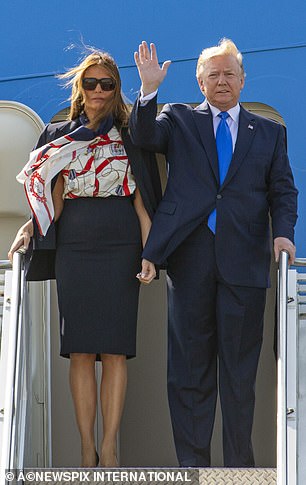 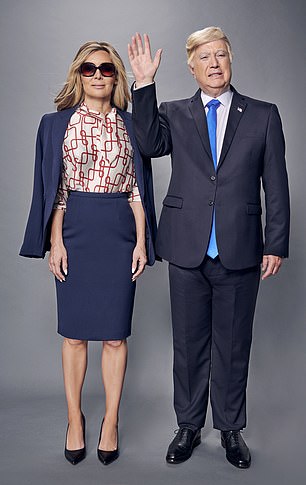 Melania’s Stansted arrival outfit would set you back £1,175 but you can get yourself the same look on a budget for £159.99

Melania’s look was a tad Come Fly With Me, but, to be fair, she was stepping off a plane at Stansted. In red, white and blue, her outfit provided a clever nod to both countries. The pussy bow was also a nice air hostess touch.

My outfit was a tenth of the cost but, I’d argue, just as classy and I felt smart and empowered. As a finishing touch, the sunglasses hid my eyes, and left me feeling slightly detached from the world. Maybe that’s why Melania loves them. 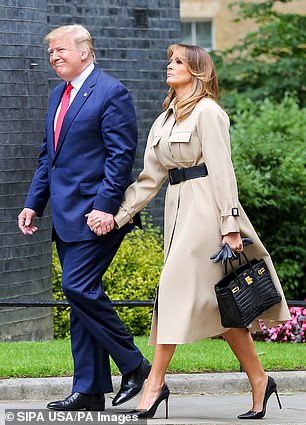 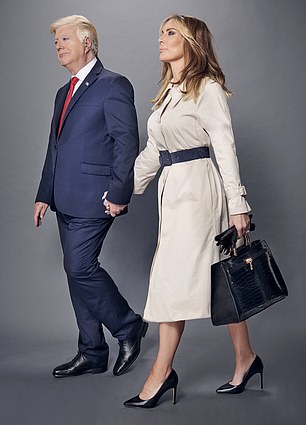 You can buy Melania’s £56,495 Downing Street Garden Party look for only £239 by shopping wisely

Melania wisely dressed for the dull English weather in a stunning khaki dress when she attended a garden party at 10 Downing Street, accessorised with a crocodile Birkin bag.

The sum of these two pieces alone is more than every item of clothing I’ve ever owned put together. That said, she looks as though she’s going to the office.

The trench coat into which I tightly belted myself looks far less swanky and swamps me.

Melania’s comes neatly to just below her knee, but, even though this is an extra small, which I’m not, mine hangs almost to mid-calf and makes me look frumpy. There’s no denying that Melania’s version is infinitely superior. 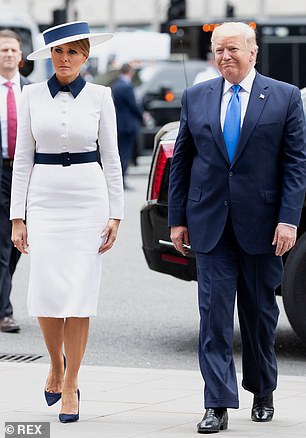 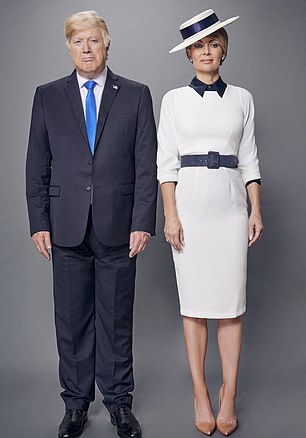 When Donald and Melania Trump visited Westminster Abbey, the First Lady’s ensemble cost £10,495, as opposed to my £364.75 imitation

I create a couture-lite look, with a navy shirt underneath the dress and the collar poking out, making sure to roll up the sleeves to hide them.

It fits rather beautifully, though I’m rather hot, and, once the exceptionally tight belt is added, I’m struggling to breathe. If Melania was similarly suffering, she certainly didn’t show it.

Discomfort aside, I feel very chic. It’s an effect I’d try to emulate again — but I’d need a different belt! 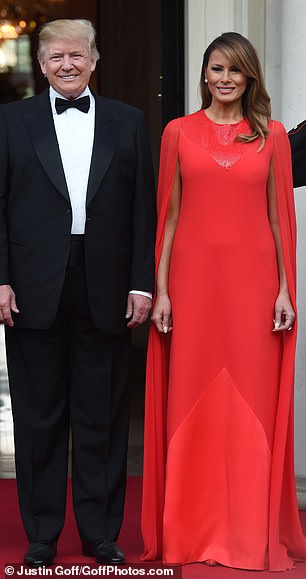 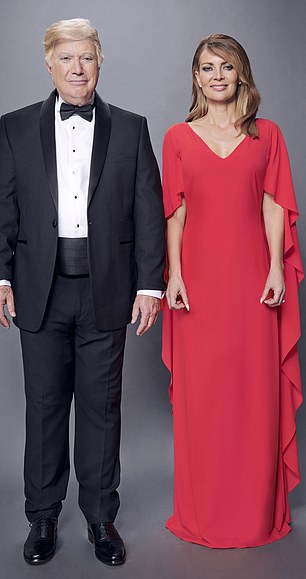 Lady in red: For dinner at Winfield House with Prince Charles and the Duchess of Cornwall, Melania wore a £5,610 Givenchy gown. Achieve the same look with a £320 dress from Gina Bacconi

There was a touch of The Handmaid’s Tale about Melania’s cape dress, which she wore for supper with Prince Charles and the Duchess of Cornwall at the residence of the American ambassador — but she looked incredible.

The Givenchy gown was designed by Clare Waight Keller, the genius behind Meghan Markle’s wedding dress. Melania wore it with sleek side-parted hair and shimmering earrings.

She has worn these cape styles before; notably a purple one by Reem Acra in Saudi Arabia back in 2017 and another red Givenchy number later that year.

It also ties in with her love of ‘shrobing’ — wearing her jackets over her shoulders in a robe-like fashion.

But again, I think my dress is nicer. The high street version by Gina Bacconi isn’t custom-made, but nonetheless it flows flatteringly over my body, creating curves where there are none and skimming imperfections, of which there are plenty.

The cape billows behind like that of a particularly stylish superhero.

Though I’ll admit it’s somewhat unlikely, should a dinner invitation from Prince Charles ever land on my doorstep, I wouldn’t hesitate to wear this.

Princess of the Palace

It’s not a competition, but there’s only one winner here — and that’s me.

You could buy more than 100 of these dresses for the cost of Melania’s, but I argue hers doesn’t look 100 times better than mine.

It doesn’t even look ten times as good — although I don’t deny that Melania looked extraordinary.

Obviously, when attending a State Banquet at Buckingham Palace, an event that’s spectacular from start to finish, you need to pull out all the stops.

I am starting to see the point of all this dressing up — my day-to-day wardrobe is based around jeans, trainers and a T-shirt or jumper, depending on the weather.

So wearing a full-length white gown, the like of which hasn’t been seen in my house since my wedding day in 2002, is heady stuff.

The fabric is stretchy and very thick — white elastane doesn’t leap to mind as a flattering look, but it’s surprisingly good at concealing lumps and bumps.

I feel a million dollars, even though I cost a fraction of that. Rather charmingly, my fake Donald tells me that I look lovely.