Professor McMillan visited St Basil’s at the behest of Australia’s then chief medical officer Brendan Murphy, when the removal of every one of the home’s 117 residents was being considered.

She reported back that there was “no need for a significant evacuation of positive residents to hospital”.

Within a month of her visit, 45 residents had died with coronavirus. They had an average age of 85. 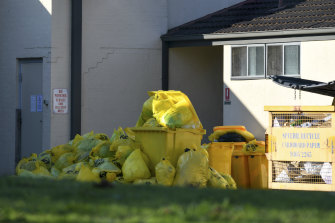 Used PPE and other waste piles up outside St Basil’s in Fawkner at the height of last year’s deadly outbreak.Credit:Penny Stephens

The six-week coronial inquest into the deaths at St Basil’s Homes for the Aged began on Monday before State Coroner John Cain.

At the hearing, Peter Rozen, QC, counsel assisting Judge Cain, revealed new details of what led to more than a third of St Basil’s residents perishing with COVID-19.

In his opening statement, Mr Rozen said that when Professor McMillan visited St Basil’s on July 22, 2020, conditions for residents at the home were so grim a complete evacuation was being considered.

Because of what Professor McMillan reported back to Professor Murphy after her visit, “the question of transferring a significant number of COVID-19 positive residents out of St Basil’s was deferred,” Mr Rozen said.

The subsequent neglect of residents, both with COVID-19 and those who were virus-free, led to many arriving at hospital within a week of her visit, close to death, malnourished and dehydrated, the inquest heard. 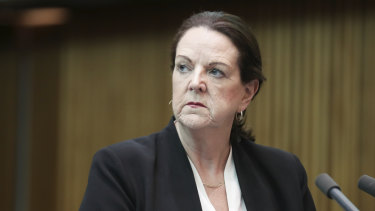 Mr Rozen told the Coroners Court, that by July 24 “the true extent of the neglect became apparent to those at the highest levels of the Commonwealth and Victorian governments”.

Before Professor McMillan’s visit to St Basil’s, Victoria’s Chief Health Officer Brett Sutton had stood down the home’s entire workforce because coronavirus had spread throughout the centre and virtually every worker was a close contact.

Professor Sutton, who will give evidence before Judge Cain next week, has said he gave this direction in the interests of both residents and staff.

The federally funded “surge” workforce that entered the home after Professor Sutton’s order was overseen by Mr Colbeck’s federal Department of Health.

Few of the replacement nurses and carers understood the systems established to look after residents – many of whom had complex medical and food needs. Several residents spoke only Greek at the facility, run by the Greek Orthodox Church. St Basil’s chairman Kon Kontis and the home’s nursing director, Vicky Kos, warned that standing down all staff was dangerous.

Within days of staff being furloughed, doctors who visited the home were expressing “genuine concern about residents starving to death and dying of dehydration from basic care needs not being met”, Mr Rozen told Judge Cain.

At the final meeting before the existing St Basil’s staff were “furloughed” on July 22, a doctor with the Northern Hospital team trying to assist at the aged care home, geriatrician Zi Yi Low, warned it was “a shocking idea” to remove all of the staff.

Dr Low described an earlier COVID-19 outbreak, at an Estia aged care home in Heidelberg where 10 people died. There too, staff had been stood down, with disastrous consequences.

“Medications were lost, meals were not provided, no modified diet or fluids and no analgesia,” Dr Low was recorded as saying in a police brief prepared for the Coroner. 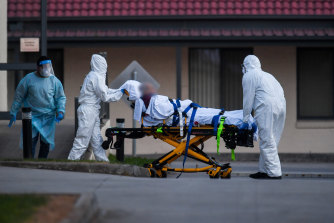 The St Basil’s outbreak was among a cluster of aged care disasters in Victoria’s second wave in 2020.Credit:Justin McManus

“Dr Low prophetically emphasised that ‘if St Basil’s go down this path, this is a facility with triple the size of Estia Heidelberg – this will be disastrous’,” Mr Rozen told Judge Cain.

Mr Rozen observed on Monday that “a number of senior Commonwealth public servants in Canberra, none of whom had set foot in St Basil’s, were making decisions on July 21, 2020, about the residents in the teeth of very clear warnings from doctors who were caring for the same residents.” 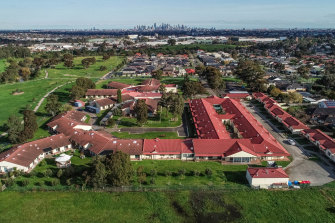 St Basil’s Home for the Aged in Fawkner.Credit:Joe Armao

Mr Rozen said one of the lessons that may come from the coronial inquest “must surely be for government officers to heed the warnings of the experts on the ground in such crises”.