An influencer has slammed diet and skincare brands for stealing her images to share products that promise unachievable results.

Danae Mercer, 33, who lives in Dubai, has built a 2 million-strong Instagram following with her pictures revealing how a simple tweak in posing, lighting and outfit can dramatically change how an influencer looks on social media.

She shows how small changes can reduce the appearance of cellulite, create the illusion of muscles and make her figure look longer and leaner.

But she says these same posts have been taken by brands and used as ‘before and after’ shots claiming to show a happy client who has lost weight, toned up or banished cellulite. 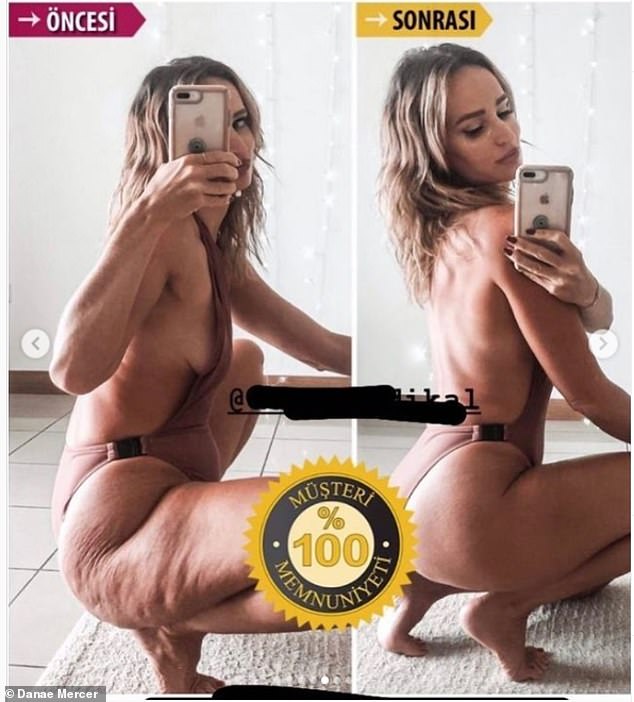 Advert: Danae Mercer, 33, who lives in Dubai, claims brands take her images to promote products for weight loss and cellulite reduction. Pictured, one such example from a Turkish brand that claims the photos – taken seconds apart – are ‘before’ and ‘after’. It also read ‘100 per cent customer satisfaction’ 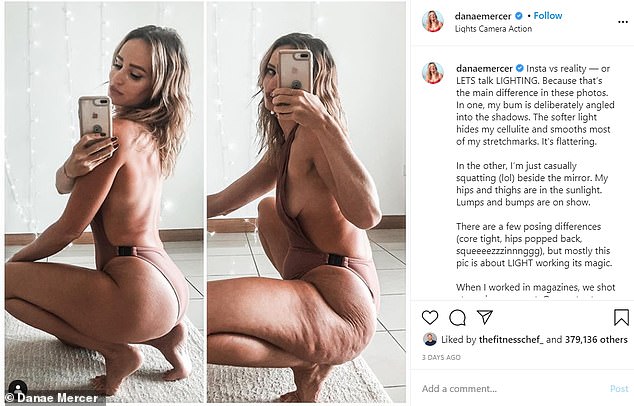 Original post: The influencer originally shared the post to illustrate how posing and lighting can create the illusion that there is less cellulite (above)

Danae, who also works as a model and journalist, took to Instagram to share a series of adverts using her images that she had found on the internet, saying she came across examples ‘every week’.

One brand used her image to promote a diet pill, saying she’d shed 22lbs by taking the product. Another cream claimed to get rid of her cellulite, while a third even made a fake trust pilot review using her pictures.

Speaking to FEMAIL, she said: ‘Basically this has been happening to me for over six months. The most recent was this week – an Italian company was using one of my images to promote their anti-cellulite wand.

‘They boosted the ad on Facebook, so a lot of my Italian followers (they promoted it to Italy) were messaging me about it. 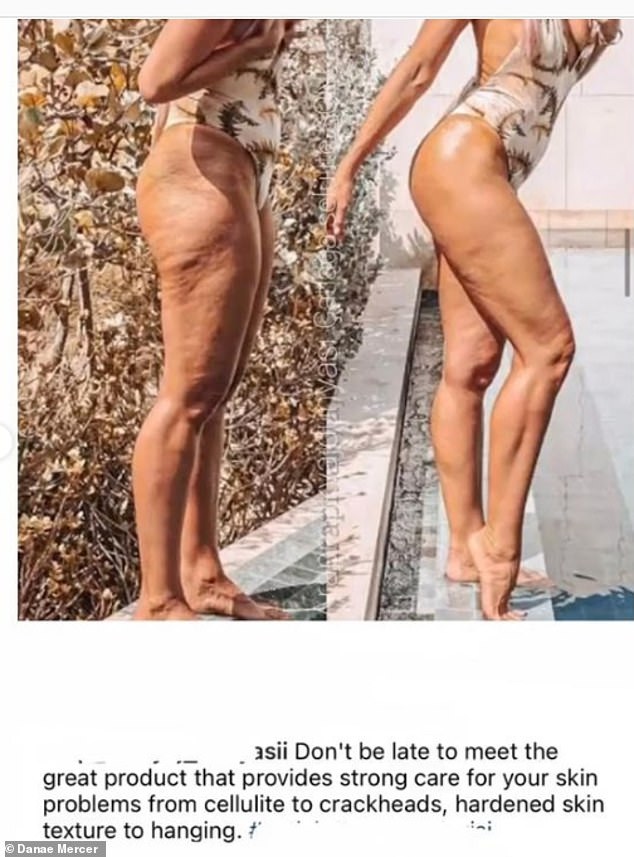 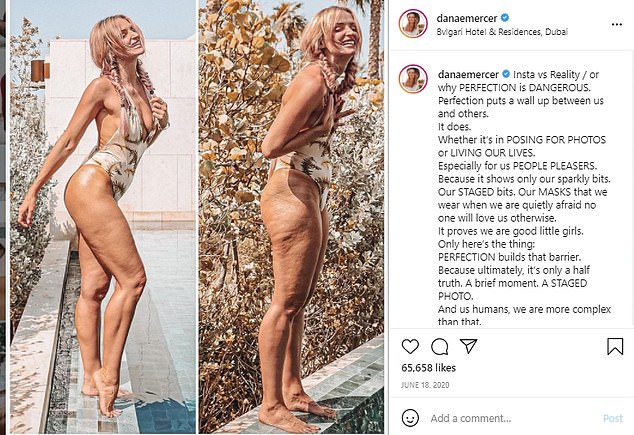 ‘As a woman who talks so much about self love and body confidence, it’s incredibly frustrating that this keeps happening.

‘The brands doing this don’t care. They’re stealing my image to sell products that literally go against everything I stand for.

‘I don’t know the solution. A few copyright lawyers have said I can take action, but often even finding out who is behind these companies feels impossible.

‘So I just want to educate people that this happens, and to be so, so, so careful when it comes to brands like these.’ 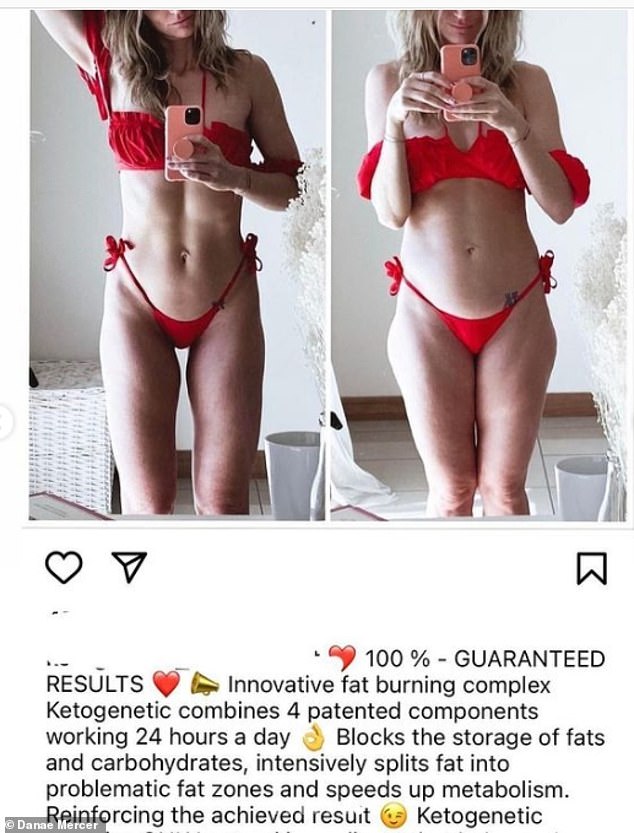 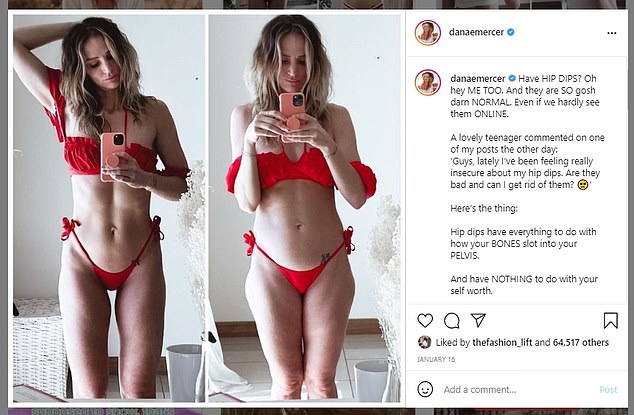 One brand used her image to promote a diet pill, saying she’d shed 22lbs by taking the product (top). The original post was designed to highlight ‘normal’ hip dips (below)

One image, was first posted on Instagram where she ‘deliberately angled’ her body so her bum was in the shadows while the flattering soft lighting hid her ‘cellulite and smoothed most of her stretchmarks’.

But in the second, Danae was ‘casually squatting beside the mirror’ and explained, ‘My hips and thighs are in the sunlight. Lumps and bumps are on show.’

This image was used to promote some sort of cellulite solution and was shared with ‘before’ and ‘after’.

Sharing her outrage on Instagram, Danae wrote: ‘Brands STEAL images all the time to SELL DIET PRODUCTS — So please, please be careful. 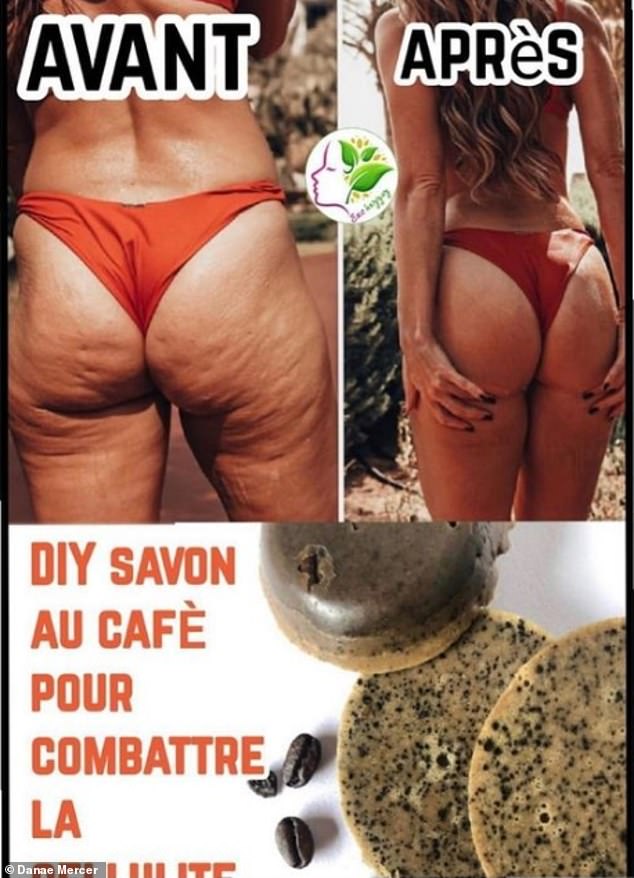 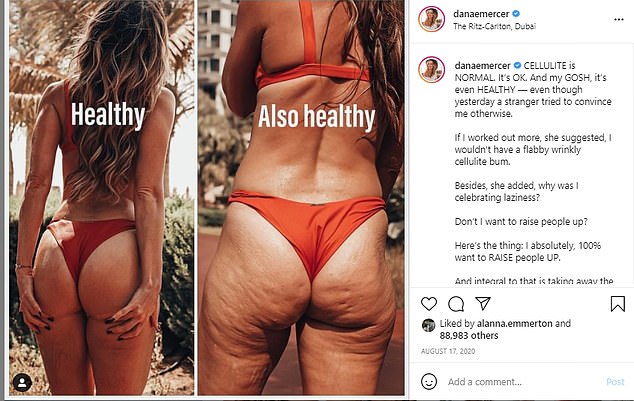 One French company use pictures of Danae and claimed they were ‘before and after’ of taking their diet product (top). They used images taken at the same time, just from different angles

‘Dozens of you have sent me this first pic here. It’s yet another company stealing my pic, slapping their logo on it, and swearing that THEIR PRODUCT changed MY BODY.

‘This company has PROMOTED the post on Facebook. So if you’re Italian and you’ve googled ‘body image’ recently, it’s probably popped up. And the thing is, something like this happens EVERY. DARN. WEEK. to me and my pics.

‘Whether it’s a keto burn-fat-fast pill claiming their detox dropped me 10kg in one week, or just some dodgy ‘body company’ using my pics to sell their guides, the scams just keep coming. 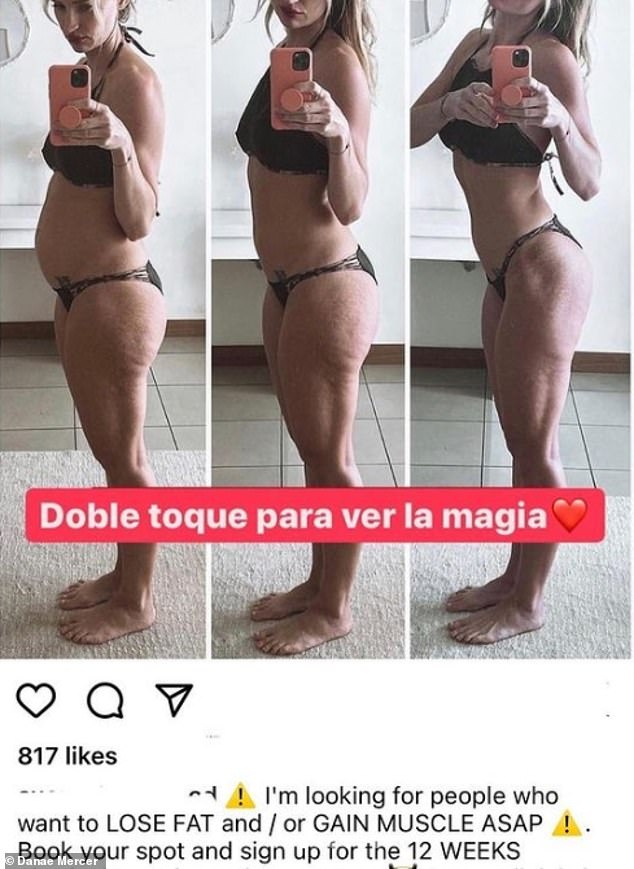 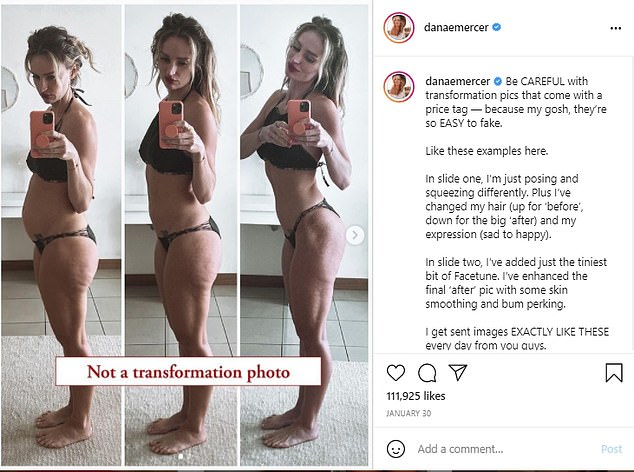 ‘I’m doing what I can (reporting, blocking, appealing). But I really, really want to remind you something critical:  SO MUCH of what we see on the internet is FAKE. Especially when it comes to diets. Weight loss. Or anything tied to BODY SHAME.

‘If a product seems too good to be true, it probably is. If it claims that you’ll lose weight INSTANTLY or STRETCHMARKS WILL POOF, be cautious.

‘And if it has a bunch of women rubbing their tumtums saying their lotion fixed ‘saggy skin’, challenge it. The diet and weight loss industry is worth BILLIONS. These brands are cashing in’. 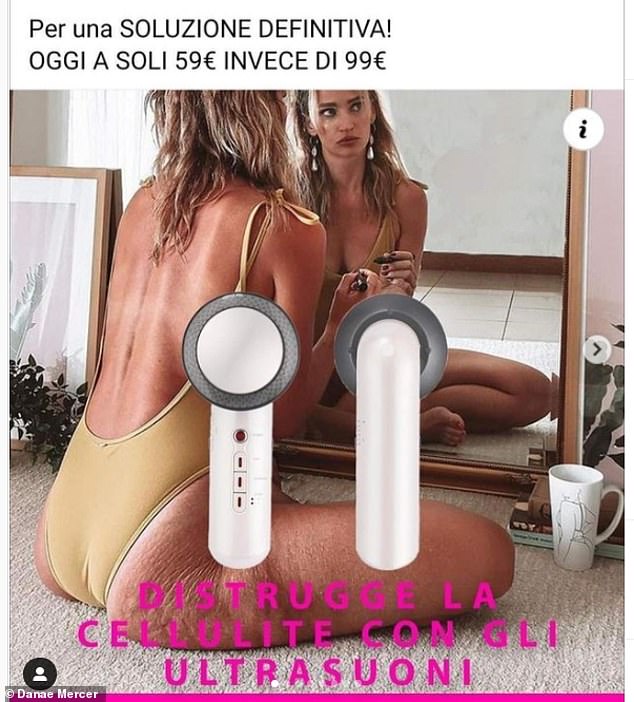 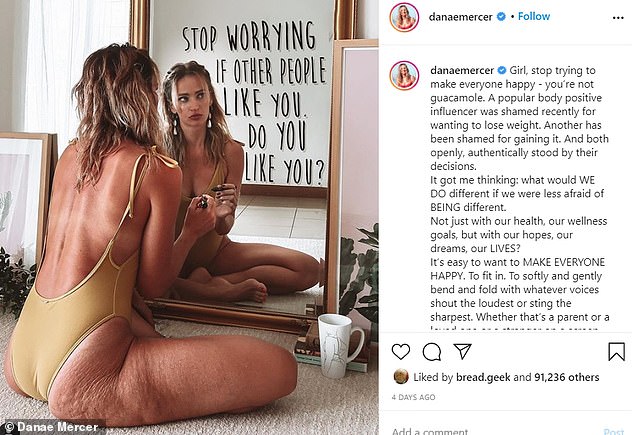