The former flatmate of Grace Millane’s murderer has revealed how he was an ‘elaborate’ liar who ‘couldn’t pay the rent’.

Jesse Kempson, 28, strangled Miss Millane, 21, in his studio apartment in Auckland, New Zealand, after the pair met on dating app Tinder in December 2018, eight months after raping another Briton, and a year after subjecting his girlfriend to sexual assault and abuse.

In a new documentary telling the tragic and disturbing story, a former flatmate of Kempson – who is serving a 17-year minimum sentence for Miss Millane’s death – recounted her own experience of knowing the cold-blooded killer and the suspicions she had of him prior to this case.

Appearing on This Morning today, Millie Mason said he was an ‘elaborate’ liar, saying: ‘He said he was coming over to New Zealand to buy bars to add to the franchise his father owned. That was his story.

‘[He couldn’t keep up with the rent payments], he owed us money, there was always an excuse. He was “waiting on money from his accountant in Australia”. 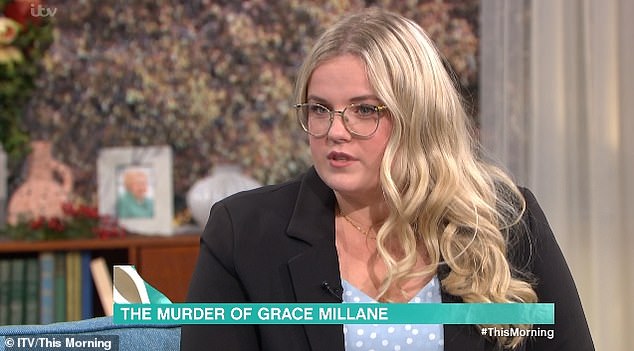 Appearing on This Morning today, Millie Mason said Jesse Kempson, 28 was an ‘elaborate’ liar, who ‘owed his flatmates money’

She continued: ‘Eventually you stop believing the stories, there were so many stories that you start to say, “Really?” It stops making sense.’

Meanwhile Millie recalled one occasion when her flatmate slept with a knife because she was scared of him, saying: ‘He came home drunk and broke some furniture and she was scared.

‘When he was drunk, the façade just goes a little bit. You immediately think, what are you hiding?’

When she heard that Grace had been killed by Kepman, she said she felt ‘shocked but not so shocked’, saying: ‘You’re shocked it happened but there is a voice in your head saying, “Your instinct wasn’t wrong, there was something wrong here”. 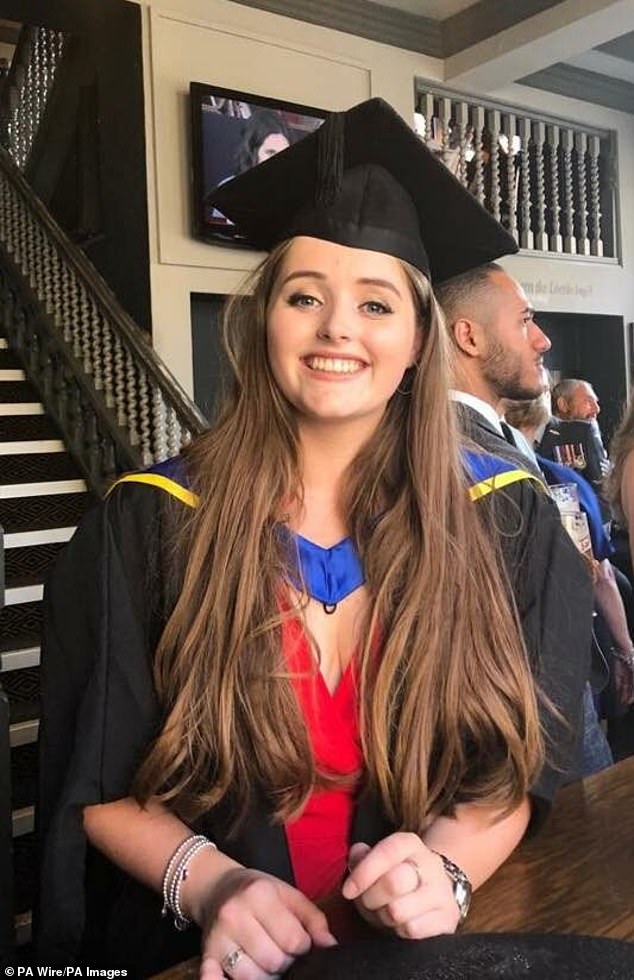 Kempson murdered Miss Millane (pictured) on the night of December 2, 2018 – the day before her 22nd birthday 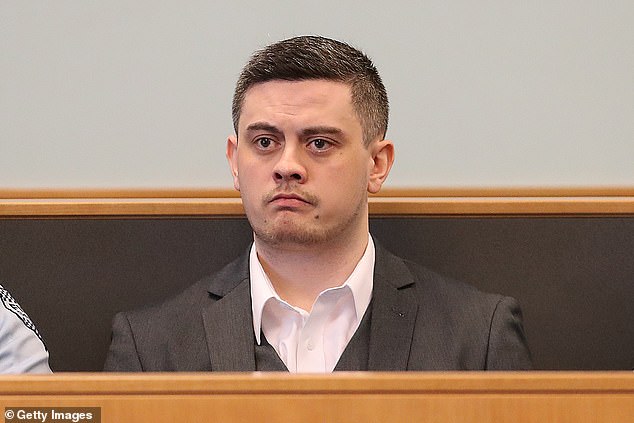 Jesse Kempson (pictured), 28, strangled Miss Millane in his studio apartment in Auckland, New Zealand , after the pair met on dating app Tinder in December 2018, eight months after raping another Briton, and a year after subjecting his girlfriend to sexual assault and abuse

Meanwhile Millie said she thought his defence of the crime as ‘rough sex’ was ‘disgusting’, saying: ‘She can’t speak up for herself and he can say whatever she wants. I don’t think it matters what she was or wasn’t into, how dare he take her life.

‘To blame it on that – she didn’t ask for that, she can’t consent to that.’

Appearing on ITV2’s The Murder of Grace Millane: Social Media Murders, which airs tonight at 9pm, Millie admitted her household ‘knew you shouldn’t be near [Kempson] alone’ and said she ‘completely get how Grace fell for him because he’s charming’.

‘We just all, all started getting a bad feeling,’ said Millie. ‘We eventually stopped wanting to be alone in the house with him, you just knew you shouldn’t be near him alone. It does make you wonder, what else he was hiding, what else wasn’t true.’ 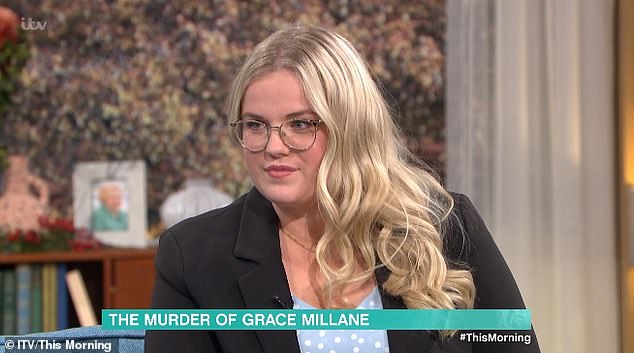 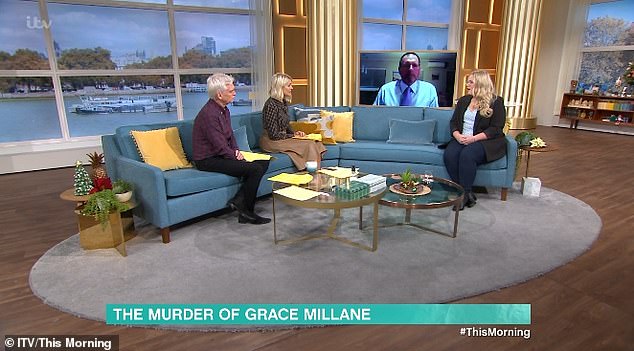 Appearing on ITV2 ‘s The Murder of Grace Millane: Social Media Murders, which airs tonight at 9pm, Millie admitted her household ‘knew you shouldn’t be near [Kempson] alone’ 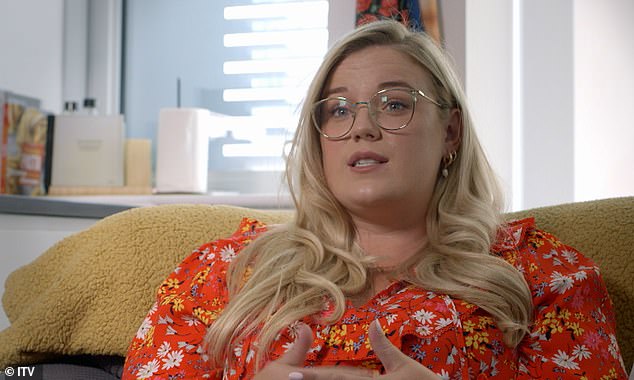 In a new documentary telling the tragic and disturbing story, a former flatmate (pictured) of Kempson – who is serving a 17-year minimum sentence for Miss Millane’s death – recounts her own experience of knowing the cold-blooded killer and the suspicions she had of him prior to this case

Kempson was a warped serial sex attacker who used dating apps to seek out fresh victims, pretending to be a highly successful businessman when he was, in fact, a serial dropout with few assets who had been fired from a string of minimum-wage jobs.

Recalling the moment she was told Kempson had murdered Miss Millane, Millie said: ‘It was awful. The friend of ours who took the room after Jesse moved out messaged us three girls, and we were all living in London at the time.

‘We’d been following the story because people don’t really go missing in New Zealand, let alone a young girl. I woke up to our group chat and he said “It was Jesse”.

Millie lived with Kempson for a short time two years prior to Miss Milane’s murder.

‘It was a shock,’ she added. ‘It goes all around in your head – I wasn’t imagining it. Shock more than anything but I don’t know if I was surprised – you are but you aren’t.’

Kempson murdered Miss Millane on the night of December 2, 2018 – the day before her 22nd birthday.

The pair had met in Auckland and gone for drinks before Kempson took her back to a hotel where he was living and strangled her to death during sex.

He then took photos of her dead body, before watching hardcore pornography for several hours.

The killer went on another date before bundling Miss Millane’s body into a suitcase which he buried in a shallow grave in woodlands.

Asked if Miss Millane’s tragic story made her feel differently about dating apps, Millie said: ‘Definitely. We’re always trained to tell your friends where you’re going or have a codeword in case you want to get out. 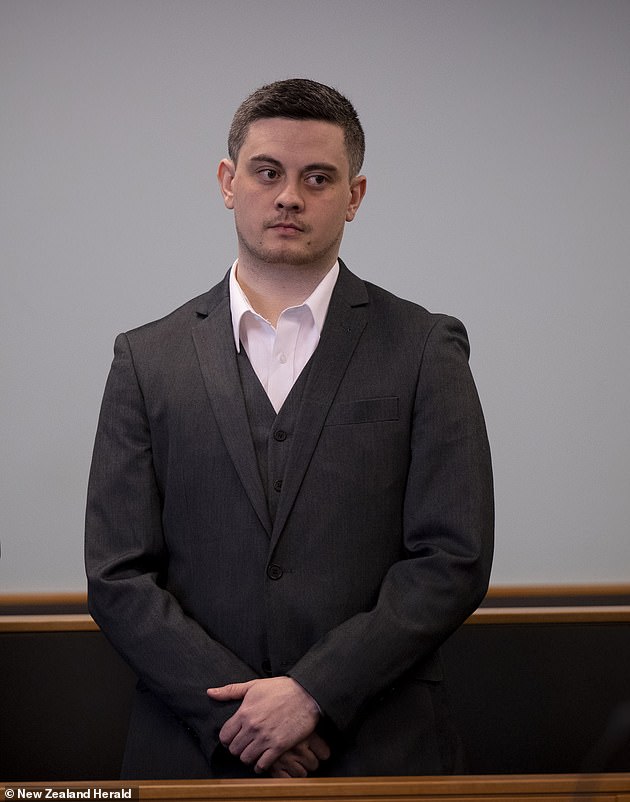 ‘He did this to a girl on a dating app. I was very fortunate that I met my husband on a dating app. But even meeting him, my friends knew where I was and for me it worked out. I completely get how Grace fell for him because he’s charming.

She added: ‘I think men need to call out men. It’s all well and good for me to stand here and say “you shouldn’t do this”. If they’re going to do it, they’re not going to listen to what I have to say about it.

‘But they probably care what their father, their grandfather and their best mate has to say.’

In 2019, Kempson was described by his step-brother as a ‘pathological liar’ who would have ‘enjoyed the power’ during Miss Millane’s murder.

The serial fantasist made up a series of lies to feed his obsession of having violent sex with young women, it also emerged.

Kempson’s guilty verdict brought to an end an 11-month saga of pain for the Millane family, who waved goodbye to their daughter in October 2018 as she set out on a world tour after graduating from Lincoln University.

After spending time in Peru, she arrived in New Zealand in mid-November and arranged her fateful Tinder for the night of December 1, planning to celebrate her 22nd birthday the next day.

Grace’s final hours on the Tinder date that led to her death:

5.45pm: Grace Millane was shown arriving in front of the casino’s 20 foot tall Christmas tree, where she stood waiting for her date. She sends a picture of the tree to her parents in Essex. He arrives and they hug.

6pm: The two of them walk into the casino and find Andy’s Burger Bar. He and Grace were seen ordering drinks and finding a table.

7.12pm: The couple left the burger bar and cross the road into the Mexican cafe where they spend the next hour until the defendant came to pay the bill with her standing beside him.

8.27pm: The pair were filmed in the distance crossing Albert Street and moving ever closer to the killer’s home. They headed into the Bluestone Room where the accused had earlier been drinking beer alone. They kiss.

9.41pm: CCTV shows the couple entering the hotel where the killer was living. They enter the lift and head to the killer’s apartment. In the hours that followed she was brutally murdered, possibly in the early hours of December 2, her birthday.

She greeted her killer with a hug, standing beside a Christmas tree in the courtyard of the SkyCity casino. They toured several bars, drinking cocktails and, as she told one of her best friends in a text message, she was clearly impressed.

‘I click with him so well,’ she wrote to her friend Ameena Ashcroft. ‘I will let you know what happens tomorrow.’

By the morning, however, Miss Millane was lying dead in the £190-a-week third-floor apartment at a hotel in central where the killer lived.

She had been strangled during sex and the 27-year-old had taken a series of intimate photographs of her naked body before watching hardcore pornography through the early hours.

Kempson began December 2, Miss Millane’s 22nd birthday, by buying a suitcase to transport her body to a shallow grave in remote bushland.

But even before he did so, he was arranging another Tinder date for that afternoon, in which he told a woman a bogus story about a supposed friend who had killed a woman during sex.

He was first snared by a message he left on Miss Millane’s Facebook profile page the night before, as he waited to leave the Bluestone Room bar around the corner.

Contacted by police, he wove an elaborate web of lies, at first claiming he and Miss Millane had parted as friends, planning to meet the next day.

He said they had each taken photographs of each other’s private parts on their cellphones and that after sex he had fallen asleep, drunk, under the shower without suspecting Miss Millane was in danger.

His lies were exposed by data recovered from his mobile phone which showed he had searched for ‘Waitakere Ranges’, the hills where he later buried Miss Millane, and ‘hottest fire’, minutes before taking the photos of her.

In November 2019, Kempson was tried and convicted for the murder of Miss Millane and sentenced to life in prison, with a minimum of 17 years.

The Murder of Grace Millane: Social Media Murders, Monday at 9pm on ITV2 and ITV Hub