The woman – who goes by the name of Snail – wanted to find out how faithful her boyfriend was before she married him.

So she enlisted the help of YouTube channel To Catch A Cheater to get the answer.

The clip shows her man Jim being approached by “Snow” – an actress employed by the YouTube channel – on a street in Beijing, China.

Speaking in Chinese, the woman can be seen asking Jim for his WeChat name – a Chinese social media platform.

“I want nothing to do with you”

She comes across images of Snail on his profile but the man appears to deny she is his girlfriend.

“This is my younger sister, I don’t have a girlfriend yet,” the subtitles say.

Snail is seen watching the scenes unfold on a separate screen and is visibly shocked.

But things are about to get a whole lot worse.

Jim agrees to meet up with the woman at the weekend – seemingly forgetting he has a girlfriend.

The clip then cuts to the man arriving at the actress’s supposed home. 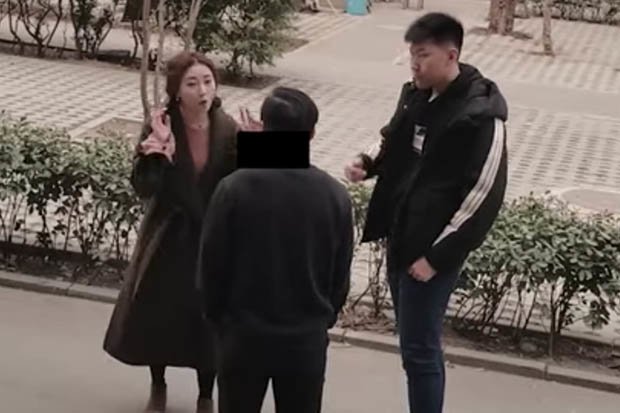 Jim eventually storms out of the build but is then confronted by Snail and her brother on the street.

“You are here to see that woman right?” his distraught fiancée asks.

“You came with a bottle of wine, I saw it all.

“If you did it in the test, you could do it in after we are married.

“I want nothing to do with you.”

Jim tries to plead his innocence but it falls on deaf ears and the clip finishes with Snail’s brother grabbing the man by the neck and leading him away.