This unashamedly sweet romcom – stay with me – is such a delight that even those who find the genre outdated and saccharine will find it hard to dislike.

Created by New Zealand comedian Rose Matafeo, who co-wrote it with fellow comic Alice Snedden, Starstruck is a modernised, Millennial take on the genre; it’s witty, people swear, have guilt-free casual sex – and are not all white. But its bones are very much classic romantic comedy. 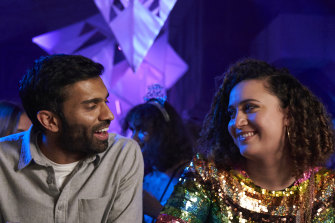 Matafeo is Jessie, a New Zealander living in London with best friend Kate (Emma Sidi, Matafeo’s real-life flatmate), working casual jobs – at the local cinema and as a slightly unreliable nanny – living a normal 20-something life: going to the pub, having one-night stands and enjoying shambolic dinner parties with mates.

When Kate drags her to a nightclub on New Year’s Eve, Jessie ends up going home with Tom, a man she meets in the men’s toilet (the queue for the ladies’ was too long). It’s only the next morning, hungover and about to sneak out of his flat, that she discovers Tom is A-list movie star Tom Kapoor (Nikesh Patel). Yes, it’s a gender-flipped Notting Hill – but a whip-smart one.

After regaling Kate with her celebrity news, Jessie adds the “best bit”. “Two hours later, I got my period! What is that? Touched by an angel!”

Of course, she is going to meet Tom again. He remembers the cinema she works at and bumps into her nearby, returning a phone charger which – surprise! – turns out not to be hers. But after another night together and some undeniable chemistry, Jessie finds evidence of what seems like a girlfriend, and hightails it out of Tom’s flat, bumping into a gang of paparazzi stalking outside. Luckily they mistake her for the cleaner. There’s a hint of cynicism about stardom here, but it doesn’t delve too deep; Starstruck is a celebration of the genre, and things never get too dark.

After this, Jessie is determined to forget Tom, and Tom is advised by his Hollywood agent (Minnie Driver) not to date “civilians” (and to stay away from bread). So begins a classic will-they-or-won’t-they scenario, played out over the course of the year; each short, sharp episode takes place in a different season, bookended by New Year’s Eve.

There are inevitable accidental bumping-into-each-other moments, misunderstandings about the other’s love life status and moments of pining. But even when she realises how deeply she feels for Tom, Jessie is rarely miserable; the second episode opens with a triumphant musical number after a one-night-stand with a different man.

Matafeo is great fun as Jessie; she’s goofy without going the full Bridget Jones-style bumbling cliche (although there are nods here to what Matafeo says is her favourite film), and is smart and garrulous. The rest of the cast play off her brilliantly as well. Sidi is perfect as the excitable best friend, as is a low-key Patel as the reluctant celebrity, all too aware that Jessie is unimpressed by his fame, even before she asks how much his home furnishings cost.

Like all good romcoms, the London portrayed here looks lovely – even gentrified Hackney has rarely looked so attractive – but it refrains from lapsing too far into whimsical fairytale, in keeping with the tone that melds charming romance with Millennial realities of crappy jobs and share houses. The final scene – a twist on the classic lovers at the airport trope – encapsulates sweet-but-not-cloying mood of the series, which HBO has already renewed for a second season.