Wearing sunglasses to hide the tears and flanked by two of her young granddaughters, Patti Newton appeared briefly before the media on Sunday morning to acknowledge the “fabulous” outpouring of emotion following the death of her husband Bert, and to say she hoped he would be remembered “as just a wonderful loving family man that was also a bit of a legend”.

The 83-year-old radio, television and stage star died in a private palliative clinic in Melbourne on Saturday night. Tributes flowed from Prime Minister Scott Morrison, who labelled him “a welcome guest” in Australian lounge rooms, Victorian Premier Daniel Andrews, who called him “an icon, a larrikin and a born entertainer”, and many other performers he inspired or mentored. 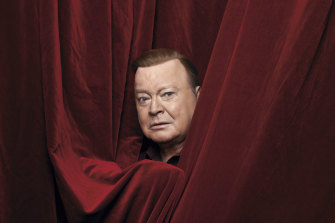 From first curtain to last: Bert Newton was there at the birth of television in this country. Credit:Simon Schluter

The public will have the opportunity to celebrate the life and death of “Ol’ Moonface” at a state funeral, Mr Andrews announced on Sunday morning. The date is yet to be revealed but the venue is almost certain to be St Patrick’s, the cathedral beloved of the life-long Catholic who was born into poverty in the then working-class suburb of North Fitzroy in 1938.

Newton had battled ill health for many years and had a leg amputated earlier this year following a severe toe infection. Despite that, his enthusiasm for life, his family and the career opportunities that lay ahead remained undimmed.

“He had no intention of going,” said Patti. “All he could talk about was things that he had in mind. ‘I’d be good at that,’ or, ‘I wonder how I’d go at doing Eddie’s show [Millionaire Hot Seat] if ever he wants to take a break.’ I loved that attitude of his. He was never going to give up.”

Newton’s career spanned the entertainment media, beginning with radio when he was a teenager, moving into television when it was in its infancy, making a handful of recordings – most notably The Bert and Patti Family Album of 1977, on which he crooned the likes of Little Old Wine Drinker Me –and the odd movie (Fatty Finn), before settling in the twilight of his career on the stage, where he had roles in major musicals including The Rocky Horror Show, The Wizard of Oz and Wicked.

It was a career built on adaptability, affability and a fundamental belief that the audience deserved the best he had to offer.

John Foreman, who was plucked from obscurity by Newton at the age of 19 to become musical director of the new morning show he had signed up to present on Ten, said: “There was an unwritten instruction on Good Morning Australia that guests would come in at the very last possible minute. Even if it was an old friend he hadn’t seen for years, he really wanted the audience to see the very best possible interactions they could.”

But while he was revered for his ability to think, and be funny, on his feet, Newton prepared heavily to make it look effortless.

“He was extremely well-read, articulate, smart as a whip,” said Di Rolle, who worked closely with Newton as a publicist and researcher on The Don Lane Show in the 1970s and ’80s. “He had more knowledge of film and movie stars than anyone I know.”

Foreman added: “He would read all the newspapers from cover to cover every morning. If there was a political topic to cover, he wouldn’t venture an opinion but he would ask all the right questions. If there was a comedian on the show he would be able to match them gag for gag. But he also knew the technical requirements for a pie in the face.”

As the sidekick to Graham Kennedy on In Melbourne Tonight in the 1960s and to Don Lane, Newton earned a reputation as the best second banana in the business. He accepted the label, but didn’t necessarily agree with it. “I’ve never considered myself one,” he told an interviewer in 1996. “But the term doesn’t offend me.”

During the 12-year run of GMA from 1992, Newton was indisputably the main man. “Bert never needed to stamp his authority as the star of the show, because it was abundantly clear and self-evident, because of his body of work, his stature, and his charisma,” Foreman said.

Newton was never shy about being the butt of a joke, whether verbal or physical. He allowed his round face and his hair loss to become key parts of his act. He even gave his toupee a nickname, Eddie (after McGuire, who was then nicknamed “Eddie Everywhere” for his ubiquitous media presence) because, he quipped, “Eddie is on everything, so he might as well be on me.”

That openness extended to others in the business, both performers and the staff behind them. 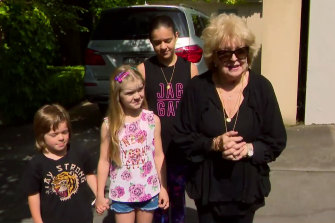 Patti Newton addresses the media outside her Hawthorn home on Sunday following the death of her husband.Credit:Nine News

McGuire, who rehired Newton when he became chief executive of the Nine network in 2006, praised his “generosity of spirit” as a performer. “It didn’t matter who was doing the gag, so long as the entertainment was coming and flying.”

He added that Newton was a “cheerleader” for the industry he loved. “He wanted people to succeed,” he said. “He wanted Australian television to be great.”

Comedian Shaun Micallef recalled that when he took on the Logies hosting gig in 2001 – a role Newton filled 20 times throughout his career – “he went out of his way to make me feel like I was part of some continuity, that I was ready. He was the best and I was nowhere as good as he was but he always spoke kindly of my hosting. 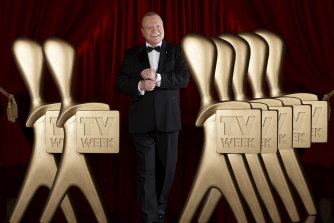 Bert Newton and the Logies were, for decades, synonymous.

Lucy Durack, who starred in the stage show Wicked with Newton, recalled the many occasions the veteran “went out of his way with kindness and thoughtfulness, giving the time of day as well as personalised phone calls, gifts and oh so much chocolate to anyone, regardless of perceived importance”.

She said some of the cast even came up with the saying “be the Bert, for any time you needed to be reminded to rise above, be kind and be the better person with wit and sparkle”.

Entertainer and producer Rove McManus, who acknowledged the inspiration of Newton early in his career when the older man had fallen out of favour, paid tribute on Twitter to “a mentor and friend”, saying “our country lost an icon, but most importantly a family has lost their hero and soul mate”.

But like most families, the Newtons have had their ups and downs over the years. Bert’s fondness of a punt took the Newtons close to bankruptcy in the early 1990s. There was also a very bitter falling-out with son Matthew, who now lives in New York, after Bert and Patti went public to discuss his mental health issues in the wake of domestic violence charges against him in the late 2000s. 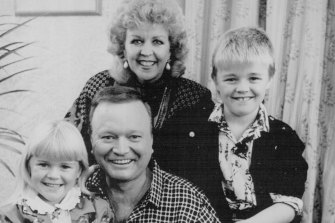 Happy snaps: Bert and Patti with daughter Lauren and son Matthew in 1986.Credit:Getty

Reports surfaced in the glossy women’s magazines earlier this year that Matthew’s partner, Catherine Schneiderman, had been urging him to return to Melbourne to see his parents, but there is nothing to suggest he has yet done so.

Whatever the private drama, the public is left to come to terms with the fact one of the last links to the birth of television in this country is now gone. The gap he leaves behind is perhaps best summed up by Grant Denyer, who grew up watching him, drew inspiration from him, and succeeded him as host of Family Feud.

“His wit was razor-sharp, and he commanded a stage like a king. He will forever be absolute royalty to me. The rest of us are just jesters,” he wrote on Instagram.

“He set the bar. We all just flounder under it. TV just won’t ever be the same.”