Want to get ahead? Be a first-class woman, not a second-class man! In the second part of a special Mail series, City superwoman (and mum of 9) HELENA MORRISSEY shares her tips for juggling the nursery and the boardroom… and how to manage the menopause

As a woman who has fought her way to the top of the male-dominated finance industry, including 15 years as a CEO — alongside having nine children —I’m often asked how I combined a career with a family, how to strike the balance between fitting in and being authentic, and whether it was even possible to achieve a work–life balance in a senior role.

To the latter, I say an emphatic yes. It is my view that we should not have to compromise anything — neither ambition, nor, crucially, our own femininity — in order to succeed. That does not mean we should do it all — the trap that women often fall into and which leads, inevitably, to guilt, anxiety and burnout.

I have fallen victim to this pernicious trap myself, striving so hard to stay on top of everything that I carried on working in the middle of a devastating miscarriage.

So, please, do not think you have to be all things to all people all the time. But if you hope to thrive at work and raise a happy, healthy family, you will need to be able to prioritise — and to be organised. 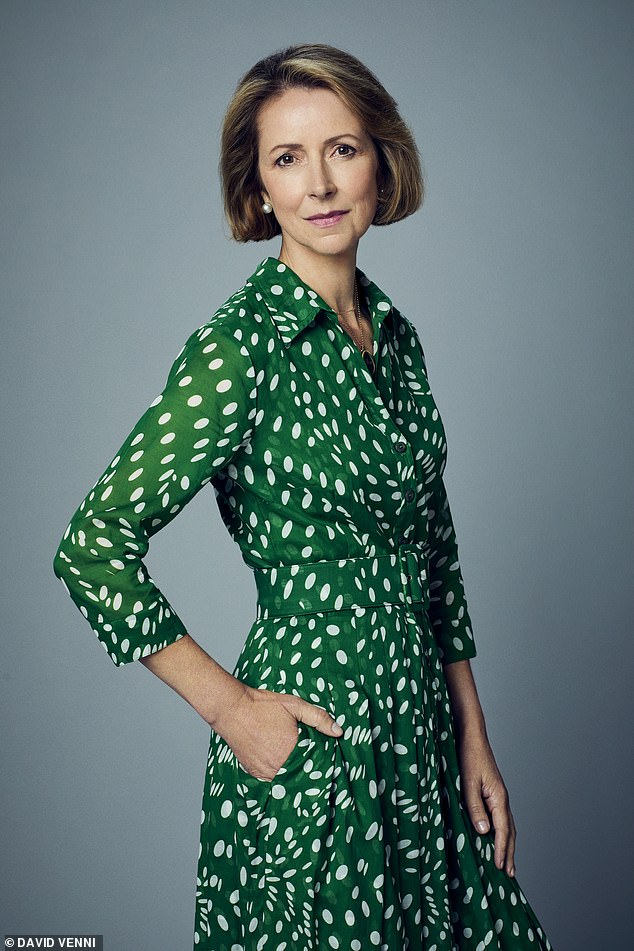 Successful careers don’t just happen if you have a chaotic life. You need to manage your physical and mental health, your time, and your relationships at home and at work.

You must also learn how to build your confidence, even if it doesn’t come naturally. And there are stages of life specific to women — the menopause, for example — that must be honestly discussed and managed too.

Again, this is something I stoically tried to soldier on through, before realising that it’s far more important to speak up and ask for the help that you need.

When I started my career, workplace culture was stacked against women and femininity; the norm was command and control, hierarchical and macho. It was hardly surprising that women tended to adopt the male trappings of power to succeed — often at high personal cost.

This is slowly changing, thank goodness. Studies show that the traits considered desirable in leaders today are far more likely to exist in women than men. Indeed, women outperform men in 17 out of 19 of them. We don’t need to pretend to be second-class men: we are first-class women.

So here is my advice on how both to succeed and lead as a woman. It’s time to take advantage of a changing world.

REMEMBER: NO ONE CAN DO IT ALL

My most traumatic experience in the office was suffering a painful miscarriage when I was 12 weeks’ pregnant.

My goal that day (besides just keeping it together) was to make sure my colleagues were unaware of my physical and emotional turmoil. As the boss, I felt pressure to carry on as if nothing was happening, although I was in tears every time I could escape my desk and hide in the loo. 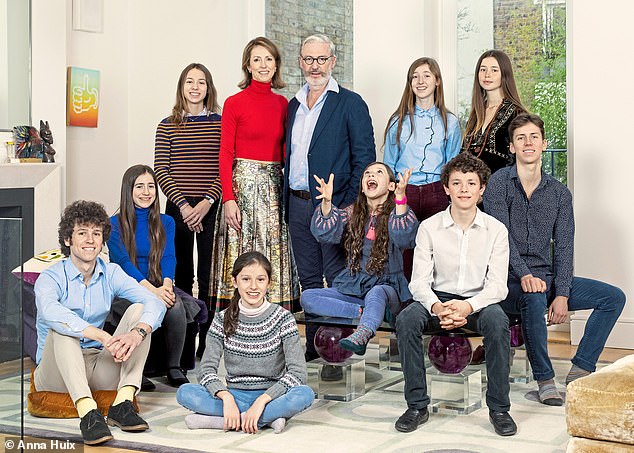 Helena admits she felt pressure to carry on as if nothing was happening, when she suffered a miscarriage in the office. Pictured: Helena with husband Richard and their nine children

I wish I hadn’t been so stoical now. We’re human beings, not machines. A stiff upper lip perpetuates the myth that strong, capable women simply keep calm and carry on.

I’m convinced that the need for pretence is one reason many brilliant women give up, feeling discouraged and isolated. They’re not weak to pause or abandon their careers when dealing with infertility or a difficult pregnancy, or suffering sleepless nights, they’re rational — and honest.

It’s heartbreaking we don’t compare notes very often. Women have told me time and again they feel they are the only one who can’t ‘do it all’. That’s an expression I have come to loathe.

BE HONEST ABOUT THE MENOPAUSE

At 55, I’m going through the menopause and it’s coincided with the issue being more openly discussed, but also with the pandemic and a new phase in my career. At the start, it felt to me as though everything was changing and after many years of ‘success’, as if everything was going wrong.

That might sound melodramatic but that’s how I felt. Initially, I tried to soldier on, but found it hard to function properly after my sleep was frequently disturbed by night sweats and heightened anxiety. I’d plenty of interrupted nights after so many babies so I thought I’d manage. I was wrong.

A quick Google search led me to a doctor specialising in bioidentical HRT: it helped enormously. Again, my philosophy is simple: don’t suffer in silence and don’t suffer unnecessarily. 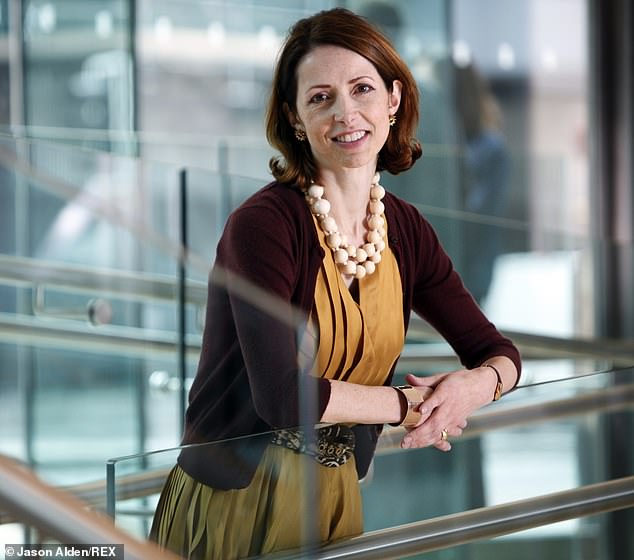 Helena (pictured) advises women to ignore imposter syndrome, while explaining that it’s natural to be nervous in new situations

There was — and maybe still is — an important psychological element too. As the mother of so many, you might think I’d be relieved to have my childbearing years behind me. In fact, the opposite is true.

I’m not suggesting my ‘loss’ is in any way comparable to a woman who desires children and reaches the end of her fertility without having them. But there is still a process of acceptance to go through.

This phase often coincides with caring for ageing parents, teenage children going through their own hormonal changes and significant responsibilities at work. Not being open and honest — and supportive of each other — seems the more problematic route, for both employers and ourselves.

Men tend to expand into their space (man-spreading), while women do the opposite. If you’re dubious, take a look at how men and women come into the room at your next in-person meeting and see how expansive or restrictive they are as they take their seats. There will be exceptions, but I’d be surprised if you don’t see a pattern.

If your own tendency is to occupy as little space as possible, to cross your legs and stoop slightly, you need to work to expand your chest, gesticulate more, reach the crown of your head to the ceiling and plant your feet firmly on the floor. Come into the room as if you are proud of who you are.

We’re told that three-quarters of us suffer from imposter syndrome — feeling like a fraud when we are promoted to higher positions.

While a lack of self-belief is supposedly a problem for many of us, it’s apparently not great to be too confident either: assertive women are said to be less likeable, and less likely to be promoted or hired. It seems that we can’t win.

My advice is to ignore all these syndromes and rules. It’s natural to be nervous in new situations, but that doesn’t mean we’re not capable of being up to the task. And the more airtime we give to the imposter concept, the more real it becomes. Don’t fall for it: you do deserve your success. 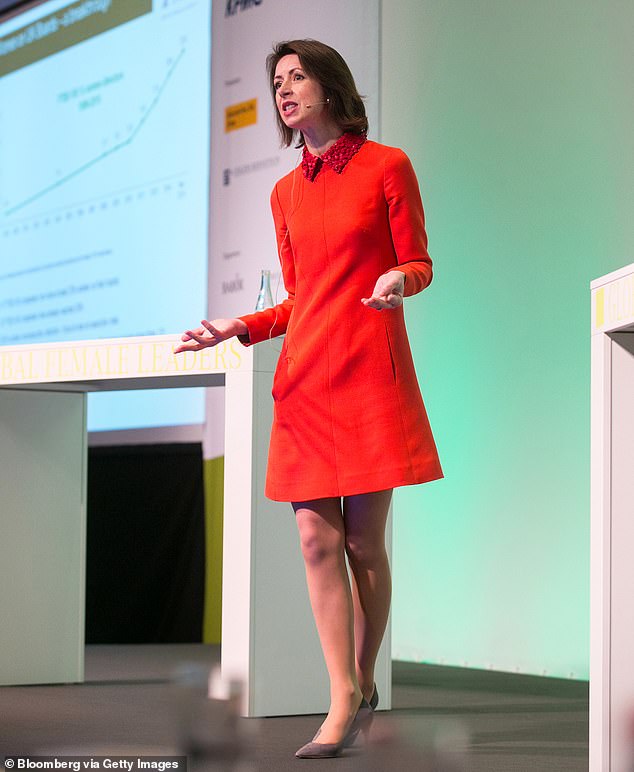 Helena (pictured) said she follows the advice of clinical psychologist Dr Emma Hepburn, who says ‘recognising you’re near your limit means you can take action’

At the start of my career, in the early 1990s, I worked for a finance company in New York where, despite a two-and-a-half hour commute, my boss would arrive in the office at 7am sharp. His wife drove him to the train station every weekday at 4.30am (I still can’t quite get my head around that).

He would bound into the office and expect an immediate rundown of the Asian and European markets. I desperately wanted to please him and would be at my desk by 6am.

He would leave for home about 8pm and I didn’t feel I could leave before him.

I would pack up soon after and walk home, stopping by the same shop every evening to pick up a sad little bagel for supper, which is almost all I ever ate.

I was young with no family responsibilities and could devote myself to the job. But the workload took its toll on my physical and mental health and I descended back into the anorexia I had suffered as a teenager, when, at 5ft 7in, I’d dwindled to little more than 5st. Today, I’ve learned to spot the signs of overload well before reaching that sort of crisis.

I follow the advice of clinical psychologist and author Dr Emma Hepburn, who says our capacity is limited and that we should think rather in terms of space in our ‘capacity cup’.

The closer we get to the top, ‘the more we risk overflowing with feelings of being overwhelmed, stressed, anxious and exhausted.

‘Recognising you’re near your limit means you can take action,’ she says.

Many of us struggle to say no, especially if trying to please a boss or colleagues, but ultimately if we don’t take care of ourselves, we won’t be much good to anyone.

The signs of being near my limit are physical and emotional. 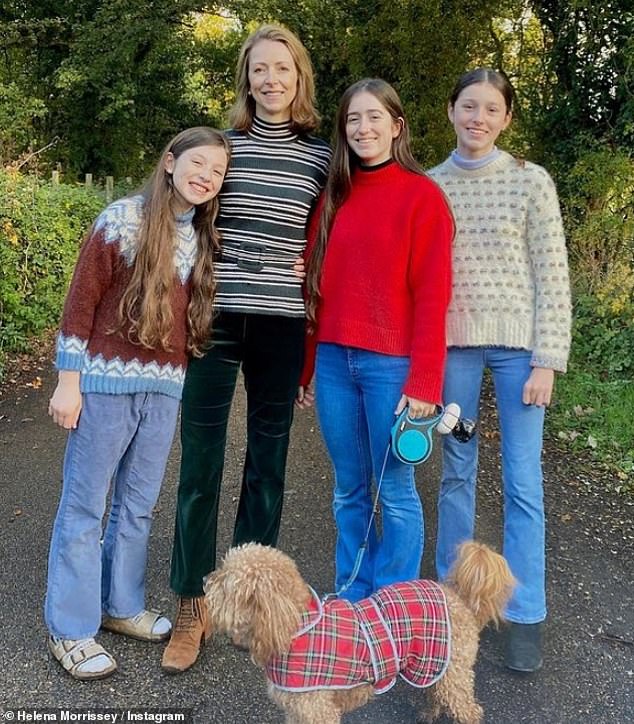 Helena said each day she takes a moment to reflect on what’s been achieved and how much she has to be thankful for. Pictured: Helena with her family

Know your symptoms of overload, and ensure there’s someone who’ll tell you to step back. In my case, that’s my husband.

USE A SPREADSHEET AT HOME TOO

Over the years, my family became reliant on a large whiteboard setting out the day’s schedule. I would start writing it early in the morning, using a marker pen to jot down what everyone was doing and when, whether they needed any special kit and who was collecting whom.

It was just a day at a time — that was plenty.

When we had a nanny, wonderful Paula who was with us for more than 20 years, she would arrive and glance first at the board then discuss anything unusual with me or my husband Richard, who left his job as a financial journalist to be a stay-at-home dad.

When our children were young, I had Excel spreadsheets for the school holidays so I didn’t get muddled and arrange two camps for the same child in the same week or leave one with no siblings to play with.

A FAMILY IS GOOD FOR US — IN THE END

The good news is that we benefit from family life, once we make it through the childbearing and early years stage.

Senior women leaders ‘see it as a pit stop in a Grand Prix’ according to a study I commissioned for the 30% Club, that I set up to campaign for a better gender balance on the boards of companies.

Nearly a quarter of interviewees said having a family led to a broader perspective, enhanced personal and organisational skills, being more empathetic and more determined to succeed.

DON’T BEAT YOURSELF UP — LIFE CAN BE HARD

There will be tough times. Combining a young family with a full-time career is likely to be one of them.

I worked as hard as I could in my job and at home, yet often felt guilty about not giving either my absolute best — something I’ve come to appreciate is inevitable for mothers, whether working outside the home or not.

But the children were happy and healthy, the firm was thriving and now I see I was too hard on myself. Women tend to be self-critical: we work incredibly hard and achieve a lot and yet beat ourselves up for the things that we can’t do.

Now, at the end of each day I try to take a moment to reflect on what’s been achieved and how much I have to be thankful for.