Director David Bruckner explains the process behind the new Cenobites — as the cast spills on seeing them on set for the first time.

The cast and crew of the Hulu’s “Hellraiser” movie have such sights to show you when Pinhead and her Cenobite army return in a new film later this month. That’s right, her, because for the first time ever, the horror icon will be played by a woman.

“Sense8” star Jamie Clayton is front and center in the new film, playing Pinhead — or, more accurately, The Priest — in director David Bruckner’s movie. Previously, Doug Bradley played the leather-clad demon-to-some-angel-to-others in the first eight films of the franchise 1987 to 2005 — before two other male actors stepped in for a pair of extremely low budget movies released by the Weinsteins to hold onto the rights.

So, yes, Clayton’s casting is a change from tradition, but it’s also still in line with how Clive Barker first described the character in his novella, “The Hellbound Heart.” In the book, the figure is sexually ambiguous and introduced as having “the voice of an excited girl.” 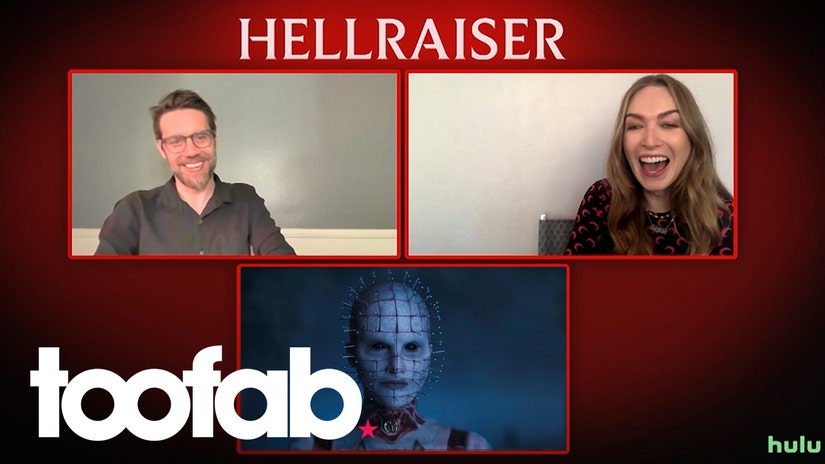 “David and I had a lot of discussions just about the intentions behind what the Priest was doing, what she was doing it, why she was thinking, what she was feeling, the sort of hunger, the desperation, the anger, all of those things, which helped me sort of mentally prepare for the place where I would get to,” Clayton told TooFab about how she and Bruckner worked together to craft a new version of the character.

“Then it was putting on the makeup and getting the whole thing on and once the neck went on, I was there,” she continued. “With the voice and the volume and the tone and the stillness and the shoulders … I remember David and I had an entire conversation about the shoulders and about how I would stand.”

“So there’s this stillness in the posture and all of that was from David and I talking and him telling me what he wanted and ideas he had and me doing things and looking on the camera and saying, ‘Oh my god, that’s it. Oh my god, do that thing,'” Clayton recalled. “I would remember just being like, ‘Shoulders!’ You have no idea how much I’m doing when it looks like I’m not doing anything!” 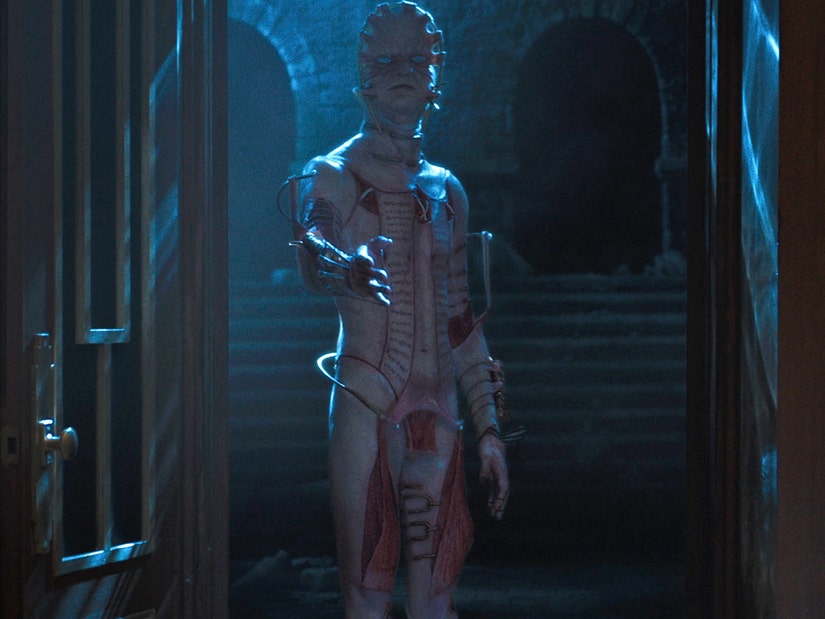 When it came to both Pinhead’s look and the designs of the other Cenobites in the film, Bruckner praised creature designer Keith Thompson for coming up with “many” iterations of The Priest and her devoted, mutilated followers.

“We really ran with this idea of flesh is leather, what is leather meant to represent and pushing the boundaries of body modification, which was something that felt very Hellraiser to us and allowed us to get a new and exciting image,” he added, “which for me that’s the spirit of Hellraiser, to expand design in unpredictable ways.”

As for that “stillness” Clayton described, Bruckner said they could all feel it on set too.

“We always talked about it being, the Cenobites, all their wounds are eternally fresh and so they’re just gliding on this immense powerful sensation, all their nerves are screaming simultaneously,” he explained, “yet she’s able to achieve a type of zen on top of that and it’s a feeling she wants you to have and that’s a pretty freaky thing to be invited to.”

Speaking with reporters, Clayton said she “really tried to do something uniquely my own” with The Priest, hoping to avoid comparisons to Bradley’s “incredible” and iconic work. She said believes that’s partly why the creators decided to cast a woman in the first place — adding, “Doug is amazing. No one could ever, ever, ever do what he did. Love you Doug.”

Doing an impression of Bradley may have been tough for Clayton anyway, as she admitted she actually even hadn’t seen the original film until the night before she auditioned for the new movie! 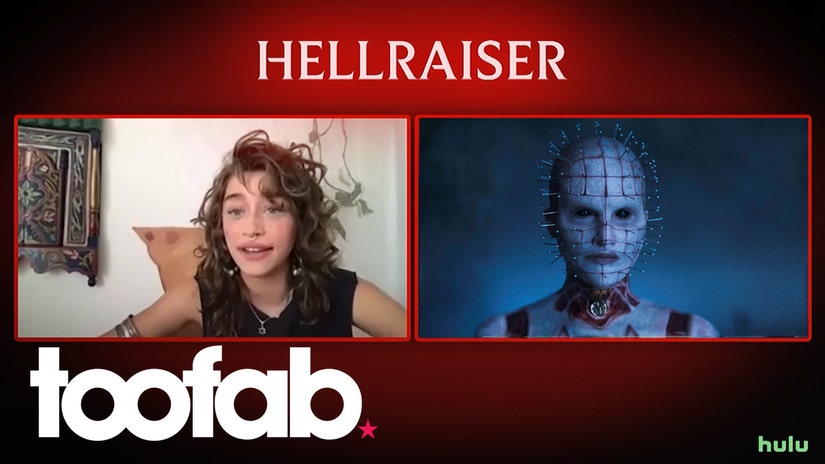 “She was incredible,” costar Odessa A’zion told TooFab of Clayton. “The iconic Pinhead is finally being played by a woman and that is definitely inspired by the way that Barker described her in the original novella. I feel like we’re finally getting our female Pinhead and she killed it. She’s so good.”

A’Zion added “it was the craziest s— I’ve ever seen” when the Cenobites first stepped on set, saying they were nothing like she was expecting. “The new ones were crazy and then [Jason Liles], he’s like 6’7″ … he comes out in this Chatterer costume and he’s like 10 times taller,” she added.

Costar Goran Visnjic got a bit of sneak peek into Jamie’s appearance since they had to get prosthetics done together, but even he let out some nervous laughter when he saw her in full costume on set.

“She looked so out of this world, it was kind of mystical and scary and unusual and unreal, surreal, because you know, like Odessa said, you know it’s an actor inside the costumes, but the details, the pins, her voice, is that really you?!” he exclaimed. “It was, I still feel unusual about that experience.”

A’Zion told TooFab the new movie isn’t trying to “replicate” or remake the original, but feels like a new story in the same universe, something Bruckner also told reporters in a press conference.

“I wouldn’t say it’s strict canon, we let our imaginations run with this,” he explained. “My suggestion to fans is to go into it not thinking of exactly where it’s fitting in the history of the series and to just experience the film.”