The high cost of an electric vehicle is the reason half of Australians remain hesitant in making the switch away from petrol or diesel cars, new polling reveals, with more than a third of drivers saying they’re not considering one as their next purchase.

The number of electric car sales in Australia remains low but is taking off fast with more electric vehicles being sold in the first half of 2021 than in the whole of 2020. 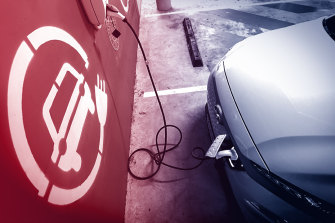 Electric cars face some hurdles to take up in Australia.Credit:Stephen Kiprillis

The Resolve Political Monitor, conducted for The Sydney Morning Herald and The Age by research company Resolve Strategic, found out of 1600 respondents only 35 per cent were considering making the investment.

Just 1 per cent of those surveyed currently drive an electric car with 38 per cent of respondents saying they would not consider one. About 25 per cent said they were unlikely to buy one in the foreseeable future.

Data released by the Electric Vehicle Council in August revealed there was a 169 per cent increase in electric vehicle sales from the first half of 2020 to the same period this year. But despite 31 models now being available in Australia, only 14 of them are priced under $65,000, while the average cost of a petrol or diesel car ranges between $20,000 and $50,000.

Half of all respondents said price was the biggest factor in their hesitation towards making a purchase, while 35 per cent said it was because there were no public EV chargers near their home.

A quarter of all respondents said they did not own a car at all and were unlikely to in the future.

The federal government is poised to announce its so-called “future fuels strategy” in the coming weeks as it plots out a path towards hitting its climate targets. It has been heavily criticised by carmakers and advocacy groups for its refusal to set targets in the sector and previous public ridicule of the technology. It last year ruled out subsidising new cars to incentivise widespread uptake.

Government modelling found subsidies for battery electric vehicles were not value-for-money for taxpayers and was an expensive form of abatement, but the Coalition is optimistic that the total cost of ownership gap between EVs and internal combustion engine vehicles will close in the coming years.

The Grattan Institute has argued that governments should encourage a thriving market for zero-emissions vehicles by exempting them from inefficient taxes such as import duties, luxury car tax, and motor vehicle stamp duty. They argue the government should ensure drivers across the country have somewhere to charge electric models.

State governments such as NSW and Victoria are offering $3,000 subsidies for electric vehicles at the less expensive end of the spectrum, while federal Labor is offering, if elected, to exempt electric vehicles from import tariffs and fringe benefits tax.

Associate Professor Anna Bruce, from UNSW School of Photovoltaics and Renewable Energy Resources, said the absence of clear government policy was the biggest reason why Australia is lagging in the transition to EVs – making it difficult for manufacturers to focus on serving the Australian market.

“The catalogue of EVs available to Australian drivers is very limited because we don’t really have a clear policy on it. This discourages car manufacturers from investing in producing left-hand drive versions of vehicles that are already available overseas,” she said.

“It’s also difficult to import second-hand vehicles into the country and on top of that, there are additional road taxes for EV owners. So, it’s roadblocks like these which are impeding the adoption of EVs in Australia.”