Steve Harvey is everybody’s favorite funny man. The 62-year-old has hosted popular shows including Steve, Little Big Shots, and Family Feud. But recent news that Harvey has been dropped by Little Big Shots and his talk show Steve has been canceled has had the media focused on the comedian.

Harvey has always been more than a comedian. He is a family man at heart, and never shy to boast about his big family. But just who is Steve Harvey married to and how many children do they have?

Who is Steve Harvey married to? 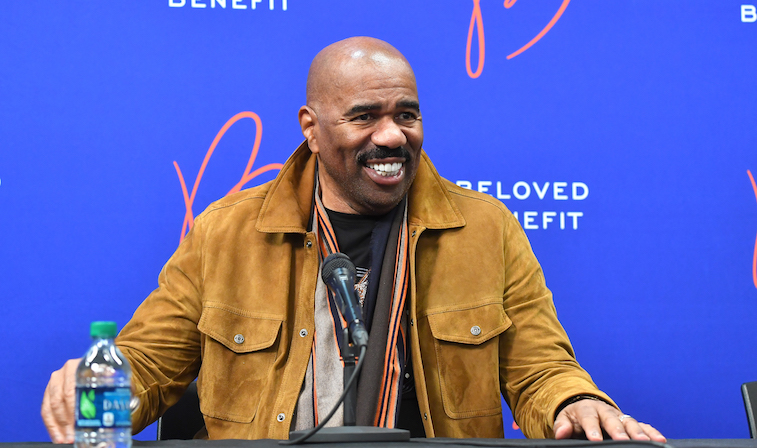 Harvey is married to fashion blogger Marjorie Harvey. The adorable couple can frequently be seen out together smiling and joking with one another. Their love is https://apothekeg…rika/ palpable and their joy with their family is contagious.

In addition to her blogs, she is very active on Instagram. She consistently posts pictures of herself, her family, and her work. Recently, Harvey shared a video about her husband’s change in employment. In the video, he explained that you’re life is a book. He said, “In this 62nd chapter, I’ve got my finger on the corner of the page. Mrs. Harvey captioned the video, writing, “So proud of you baby! Let’s go do this 👊🏽😍🙏🏽.”

How long have they been married?

Marjorie and Steve met back in the early ’90s. At the time, they both knew that they would end up together. However, after just a short time of dating, the two parted ways and Harvey went on to marry Mary Lee Shackelford. The two were married for nine years and had one child together, divorcing in 2005.

In 2005, Harvey began dating Marjorie again. After two years of dating, they married in 2007. Together, the couple has seven children. Steve has twins Brandy and Karli and son Broderick from his first marriage, and son Wynton from his second marriage. Marjorie had three children of her own when the couple was married, Morgan, Lori, and Jason. Steve has adopted all three of her children and raised them as her own.

Believe it or not, Steve and Marjorie are proud grandparents. The couple has a total of five grandchildren, whom they love spending time with. One look at Marjorie’s Instagram will tell you just how in love she is with her grandbabies.

Are they getting a divorce?

According to Radar Online, Harvey is in the midst of a “nasty divorce” with his wife. The comedian has been divorced twice before, so it can be easy to believe the rumors that another relationship has fallen apart, particularly given his recent career moves.

However, according to the couple, everything is just fine. Marjorie Harvey posted the cutest video of the couple responding to articles floating around about the two of them. When asked about the divorce, Steve Harvey looked at his wife questingly and asked, “You leaving me?” Marjorie responded with the same level of confusion, responding, “I heard that too.”

He continued asking, “If you’re leaving, when were you going to tell me?” To which she hilariously responded, “I didn’t know I was leaving. I just found out I was leaving.”

The couple also addressed rumors that they were broke and Steve Harvey jided his wife telling her that she is going to have to return her expensive clothes. In an interview with, when asked about her supposed divorce, Marjorie Harvey responded, “We’re prayed up … Prayer works. We’re covered.”