Powerful gestures. Meghan Markle and Princess Kate each offered their sympathies to mourners in the wake of Queen Elizabeth II‘s death — and ignored royal protocols while doing so.

The Suits alum, 41, and Prince Harry joined Kate, 40, and Prince William for a walkabout around the Windsor grounds on Saturday, September 10, two days after Buckingham Palace confirmed the queen’s death at age 96. Crowds gathered outside the estate and were greeted by the Fab Four in a rare joint appearance, with some citizens even sharing heartfelt exchanges with the two couples. 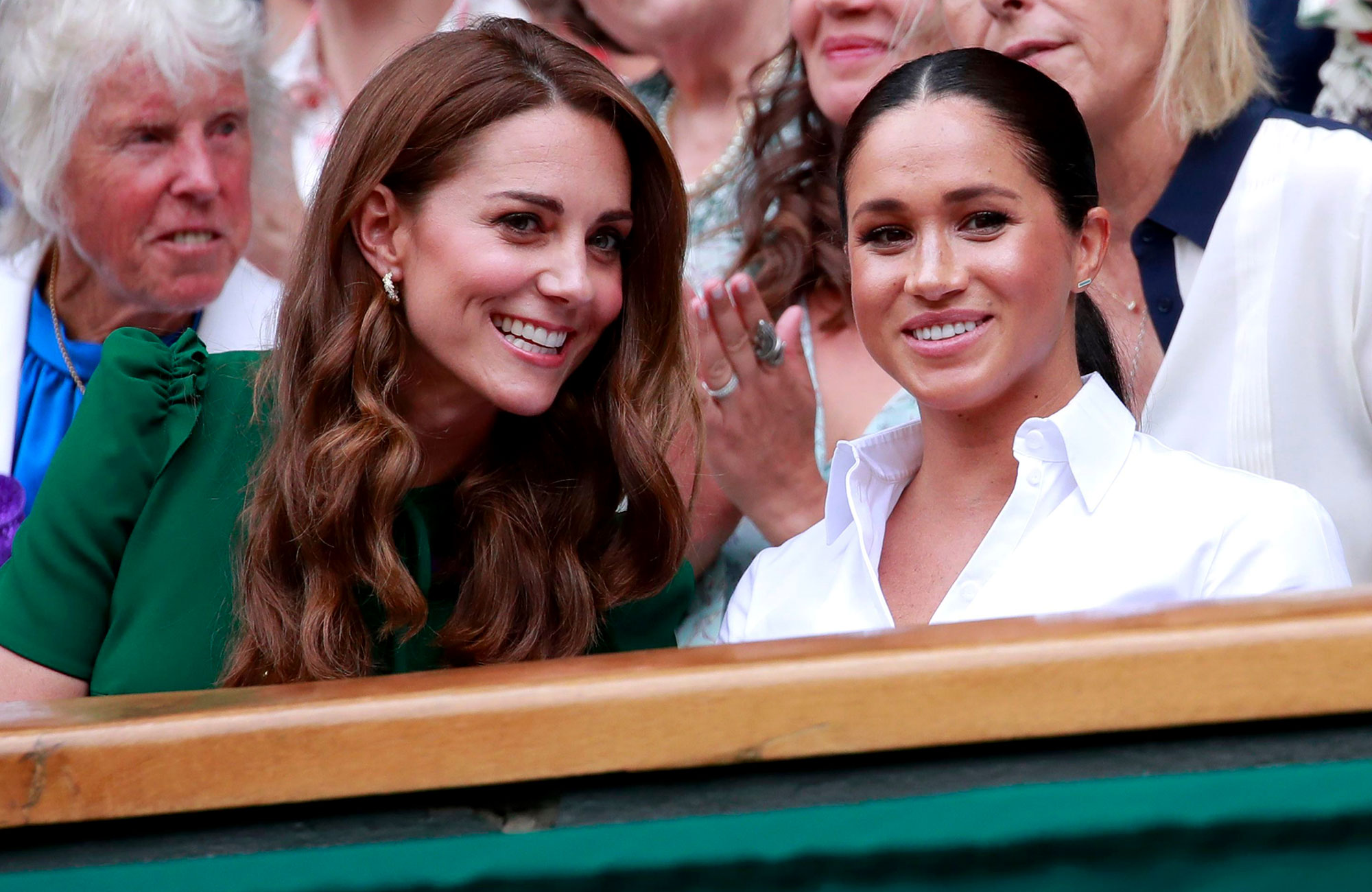 Both Meghan and Kate were photographed hugging some well-wishers on Saturday as they grieved the royal family’s great loss. After a clip of the Bench author embracing a teenage girl at the gates went viral, the 14-year-old reflected on the special moment during an interview with CNN.

“We were just waiting for her to come, and she just came near me. [She] asked my name, how my day was, how long I was waiting,” the U.K. native explained. “It was really nice. … I look up to her in some ways and it just felt like it was the right thing to do.”

The newly named Princess of Wales, for her part, was seen comforting onlookers as the foursome accepted flowers and sympathies from the crowd. It’s unusual for members of the royal family to exchange hugs with everyday people during their engagements, with the late queen often only shaking hands while wearing gloves throughout her 70-year tenure on the throne.

Harry, 37, and Meghan were personally invited by William, 40, to walk around the palace grounds on Saturday. “They were delayed in arriving while they arranged the plans,” a source exclusively told Us Weekly of the public reunion. 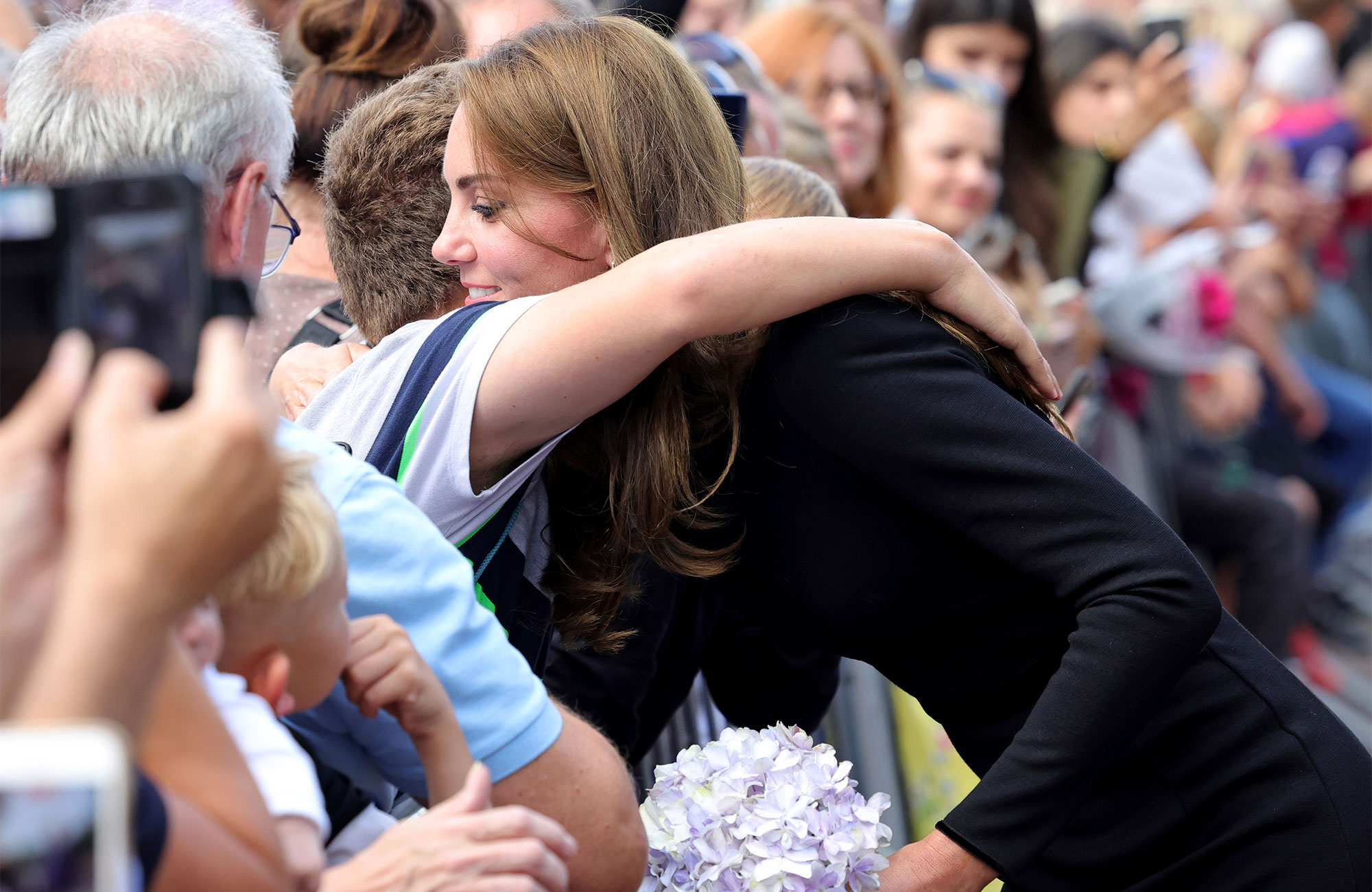 The brothers rushed to Scotland to say their goodbyes to the monarch on Thursday, September 8, after she was placed under medical supervision by her doctors. Harry and other royals — including King Charles III — left Balmoral one day later to return to London as the country entered its official mourning period.

William and Harry’s reunion comes after several years of tension between the siblings. Drama ensued after the former military pilot and Meghan announced in January 2020 that they intended to step down from their senior royal duties, moving to the U.S. later that year. The couple are now raising son Archie, 3, and daughter Lili, 15 months, in California.

Everything Meghan Markle Said About Her Relationship With the Queen

While their own relationship has been through plenty of highs and lows, both William and Harry were particularly close with Elizabeth before her death. They each reflected on her lasting impact — both as queen and as their grandmother — in emotional statements as they continue grieving.

“She was by my side at my happiest moments and she was by my side during the saddest days of my life,” the Prince of Wales wrote on Saturday. “I knew this day would come, but it will be some time before the reality of life without Grannie will truly feel real.”

The BetterUp CIO, for his part, remembered all of the “special moments” he’d shared with Elizabeth over the years. “She was globally admired and respected. Her unwavering grace and dignity remained true throughout her life and now her everlasting legacy,” he wrote on Monday, September 12. “Let us echo the words she spoke after the passing of her husband, Prince Philip, words which can bring comfort to all of us now: ‘Life, of course, consists of final partings as well as first meetings.’”