“Old Town Road” is the hottest song in the world right now.

It was an instant viral hit that has spent the last eight weeks at No. 1 on Billboard’s Hot 100. It went triple platinum in May and has been streamed over one billion times.

But the song also gained notoriety for sparking a national debate over whether a rapper, who happens to be black, can create a country hit.

The hit single, “Old Town Road,” has caused divisions within the music industry.

But the controversy has united an unlikely pairing between a country legend, Billy Ray Cyrus and a rising star: 20-year-old rapper Lil Nas X.

And he’s not going away.

“This is only the beginning. And you know people won’t realize that until they realize it,” the artist, born Montero Lamar Hill, told “Nightline.” “I knew for a fact that this song would take me to another level but … I can’t say I knew that it was going to be worldwide or nationwide.” 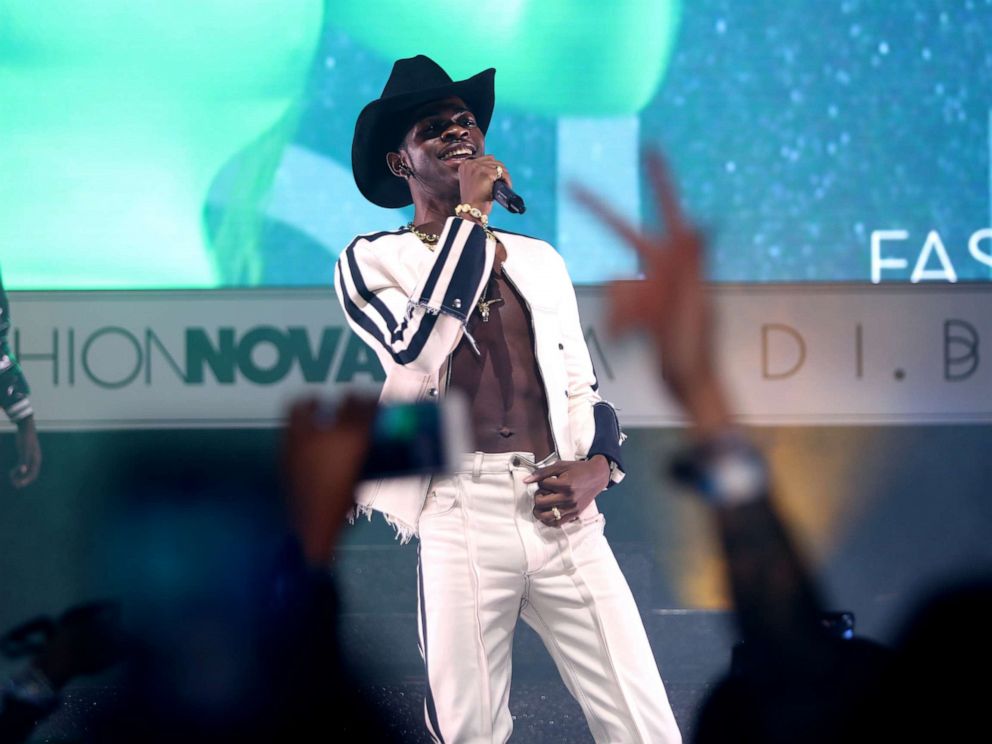 For Hill, all of this seemed unfathomable less than a year ago. A college dropout, Hill was living on his sister’s couch in Atlanta, trying to get anyone to listen to his songs.

“Life was me moving from sibling to sibling[‘s] house, promoting my music through Twitter… barely getting a reaction out of anything,” he said. “Then I find this beat on YouTube which is ‘Old Town Road,’ beat by this guy named Young Kio… and I made this song.”

He paid $30 for the beat and released the track independently.

“I first started with a tweet and it was already having some momentum. And then … over the course of a few months, I would just [put] it into memes and kind of forcing it into the Internet, in a way … it started to catch on,” Hill said.

The song went viral on the video sharing platform Tik Tok. Before he knew it, Lil Nas X found himself on Billboard’s country chart, debuting at No. 19.

“If you don’t know what Tik Tok is, that just means you’re older than 15,” said Joe Levy, a contributing editor at Rolling Stone magazine. “’Old Town Road’ became a meme on Tik Tok. People would drink something called ‘yeehaw juice’ and the song would start up and they might be dancing in a hip-hop manner and they would jump in the air and transform into cowboys.”

Brittany Hennessy, the author of the book “Influencer” and the cofounder of CARBON said a catchy hook or a “strange” wild line can turn a song into a meme. With “Old Town Road,” she said, “it’s that ‘I got horses in the back.’ And for some reason that’s what people latched on.”

“Social media is the biggest factor in every song is nowadays,” he said. “It’s like I use that to my advantage… and it worked.”

Now it seems like everyone wants in. Celebrities like Kim Kardashian West, Tom Brady and Keith Urban are fans.

Jem Aswad, senior music editor at Variety, said “Old Town Road” is “one of the biggest songs of the year if not the biggest.”

But less than a week after the song landed on the Billboard charts, “Old Town Road” got the boot. In a statement to Rolling Stone, Billboard said the track “does not embrace enough elements of today’s country music to chart in its current version.”

That decision led to outrage online, with some fans crying discrimination.

“I can’t control what people would think. You know people always want to say something,” Hill said. “But … I know what it is.”

“I just thought, ‘Wait, that’s not fair,’” Cyrus told “Nightline.” “Waylon [Jennings] being one of the greatest outlaws in the history of country music, and he said to me ‘the definition of an outlaw is one who has been outlawed.’”

Cyrus said he thought the song “was a smash.”

“When I hear something, I don’t necessarily try to define it by what is its musical genre,” he continued. “I say ‘do I relate to that song? Does it feel like my roots?’ ‘Old Town Road’ was all of me– it was my past, present and future. It had everything that I’d been raised on my whole life — banjo, bluegrass and [a] solid country hook.”

Hill said Cyrus is a “cultural icon” and that his collaboration took the song “to a new level. Definitely.” 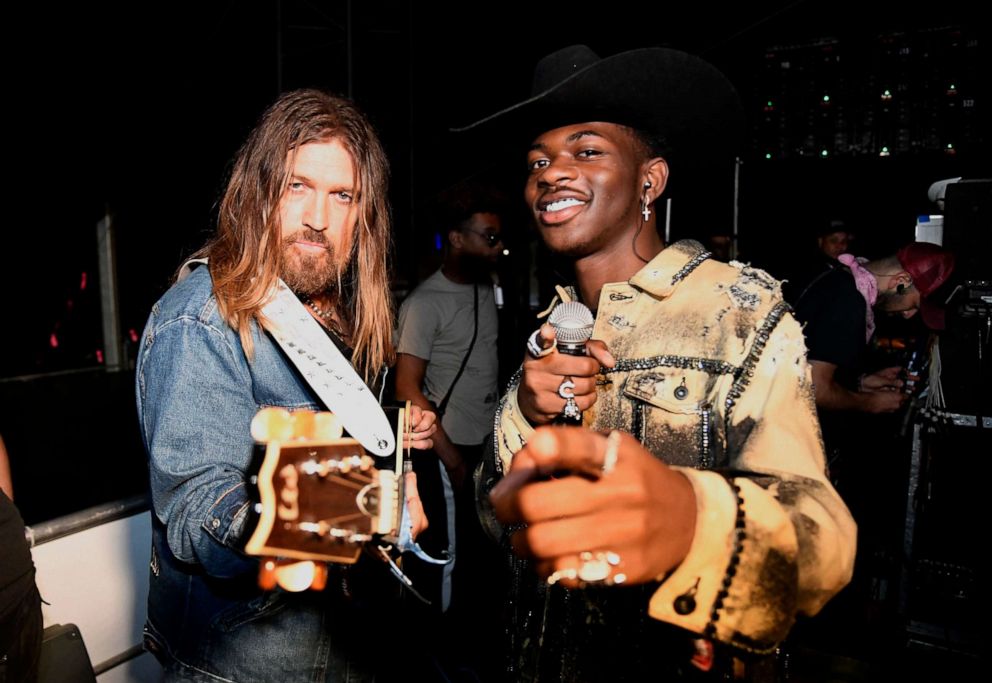 And country fans do love it. The unlikely duo teamed up for a remix of “Old Town Road” for an epic, star-studded music video.

Cyrus said the beauty of the song’s success is “the fans.”

“It was about people driving the song, not about a critic saying ‘no, this doesn’t fit our rulebook,’” he said. 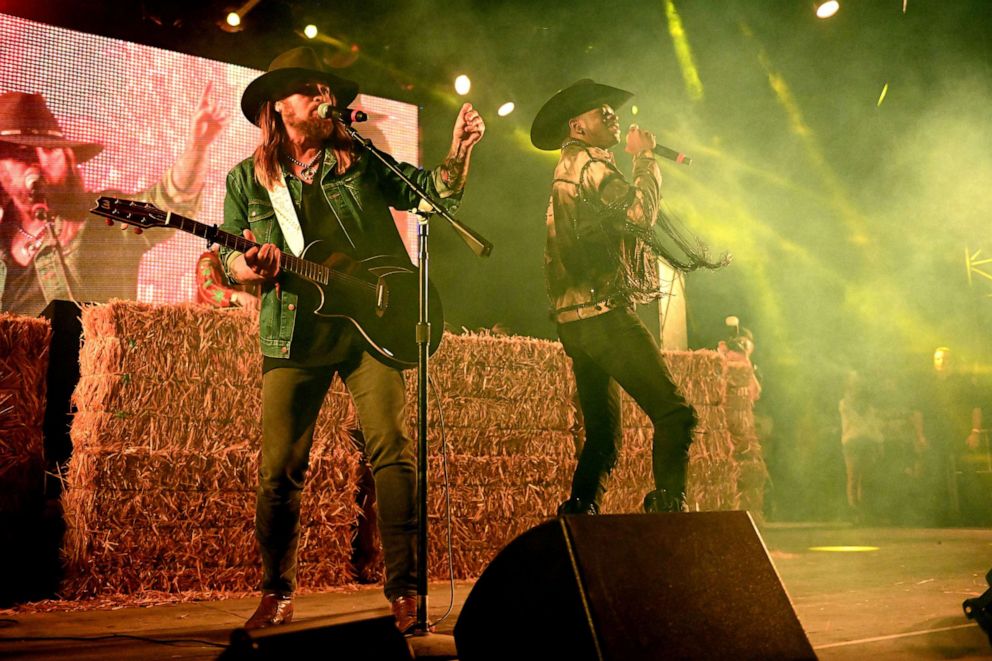 “I’m 57 years old and never thought I’d feel anything like this ever again,” Cyrus went on. “I’ve been a part of a couple of things that were described at the time as a phenomenon, including ‘Achy Breaky Heart’ and Hannah Montana. And this song, and this moment, and this movement feels like all of that plus more.”

Cyrus said Hill “doesn’t need any advice” from him, adding, “Think like there is no box. In today’s world you don’t have to limit yourself to one particular style or genre. Be it all.”

Aswad pointed out that country music has gone through a transformation over the past decade.

“A lot of what’s popular in country right now a lot of people 10 years ago would not have considered to be country songs,” he said. “Country has become very rock and roll in a lot of ways. And there’s all this pop crossover … so all bets are off.

But not everyone agrees. Last week, after announcing his collaboration with Wrangler, Hill faced more backlash, furthering the debate on what it means to be “country.”

Wrangler tweeted a response to one customer, saying: “As an iconic brand in fashion, we have shown up in music, film and popular culture for decades. Our Western heritage and offering a quality and versatile product for all wearers will always be the very heart of our brand.”

The haters haven’t stopped Hill. Since then, he’s been everywhere. Just this week, Hill surprised a group of elementary school children in Ohio, performed in Boston ahead of Game 1 of the Stanley Cup series and scored the new “Rambo” trailer. “Nightline” was with him and Cyrus when Hill took the stage for the first time ever at the Stagecoach Festival in April.

“Lil Nas X Definitely has special sauce because he decided he wanted it to go viral and he did it,” Hennessy said. “It’s not just about making something that you think people will like. It’s actually making something that people can like and then making their own because that’s what makes them share.”

This month, Hill will be releasing an EP and an album will likely follow.

“I just know they’re both going do great and people going to love it,” he said.