Many adults still think of Jacqueline Wilson as the queen of children's kitchen-sink drama. Her protagonists are children living in care or on tough council estates; they deal with absent parents, mental illness, homelessness, bereavement. She does grit-lit; it's all about contemporary social realism. 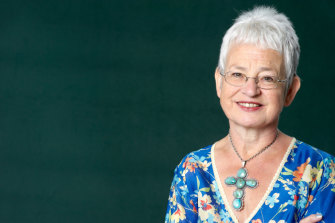 Yet her recent novel, Dancing the Charleston, is set in the '20s and its heroine lives in a cottage on a grand country estate. Indeed, four of Wilson's five most recent books have historical settings.
There is a reason she is writing more historical fiction.

"Up until secondary school age I feel I still know more or less how children think," Wilson says, "but it gets harder the older they get because social media has changed things. This whole intensity about the way you look and what people think of you. I find it quite difficult to put myself in the mind of an average 13-year-old nowadays. But if I write about, say, Victorian 13-year-olds, I feel I'm much more aware of what life was like then."

She is also concerned about bullying on social media. "It worries me desperately. When boys and girls get so worked up that they feel that life isn't worth living, I think, if only they could fast-forward five or 10 years and see themselves in the future, leading perfectly happy lives."

Wilson is 73. She's charming, funny, enthusiastic and extremely hard working. Dancing the Charleston is, astonishingly, her 110th book. "Well, so they tell me," she says. 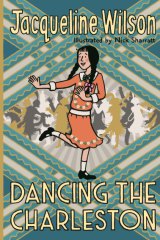 Jacqueline Wilson’s most recent novel is set in the 1920s. Credit:

A bookish, dreamy, only child, she always wanted to be a writer. She grew up in a council flat in south-west London. Her parents had a volatile relationship. During a trip to Brighton, a quarrel became so heated that, when the car stalled, her mother and father each leapt from the vehicle and stalked off in different directions, leaving their mortified daughter in the back with her embarrassed school friend. There was also a Christmas Day argument that ended with her father throwing the turkey across the kitchen floor.

"One of my books starts with a rather disastrous Christmas Day and I remember my editor said to me, 'Jackie, how can you write this? Christmas is so lovely'. Well, it is for most people, but if you come from a family with huge difficulties then it's not lovely. It's a horrible day."

After leaving school at the age of 16 she got a job at Jackie, the teenage girls' magazine (it wasn't, as is popularly believed, named after her).

Her first book, Ricky's Birthday, was published in 1973. By the time of her first bestseller, The Story of Tracy Beaker, in 1991, she had written more than 20 titles. She has now sold more than 40 million books in Britain alone and has been translated into 34 languages. She has won all the prestigious awards and was an evangelical Children's Laureate.

Wilson writes every single day, including holidays. "It's not a huge amount of writing. Every morning, I go back to bed with a cup of coffee and sit there in my pyjamas with my laptop. I cannot get out of bed unless I've done at least 500 words and, ideally, I'll do a thousand."

She's still a bookworm. Her current favourites include Anne Tyler, Margaret Forster and Elizabeth Strout. A children's author she hugely admires is Katherine Rundell. "I think she's a really exciting writer whose stories will last," she says.

We are talking soon after a new young-adult novel by John Boyne, about a transgender teenager, has been attacked as "transphobic" by campaigners. Would she ever consider writing about a trans character?

"If there was a really strong reason for me wanting to write about a trans child, then possibly," she says. "But I wouldn't want people to think I'd jumped on the bandwagon just because it's current and in the news."

Her own novels have occasionally caused controversy for tackling themes that some critics thought too adult, but she recognises that trans issues stir particularly strong feelings.

Of course, Wilson doesn't have to create any sort of character ever again if she decides not to. She could put down her pen tomorrow and live a life of leisure. However, although she has suffered from poor health in the past, with heart and kidney problems, she says she is "fighting fit" now and that retirement is the last thing on her mind.

"I would only feel half a person if I wasn't writing," she says.

Dancing the Charleston is published by Doubleday at $29.99.