It’s hard to imagine what Adam Levine, a man currently best known for prolifically messaging women half his age, is feeling right now.

His private life has been made public, and to add insult to injury of his own making, the content of his many direct messages was made public days after his wife, Behati Prinsloo, announced she is pregnant with their third child. 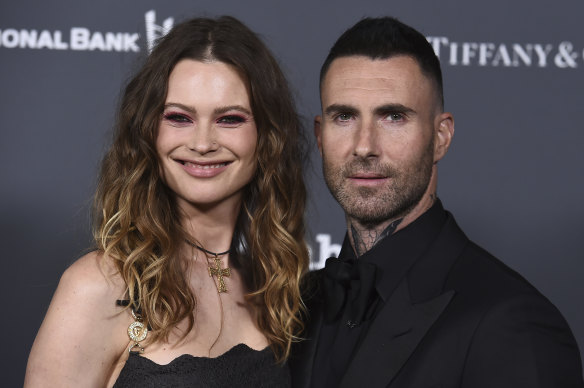 Adam Levine’s private messages with women on Instagram were made public just days after his wife Behati Prinsloo, announced she is pregnant with their third child.Credit:AP

Feelings aside, though, we do know what Levine believes, and that is that sliding exclusively into the DMs of women whose frontal lobes are still developing with sexually suggestive messages does not constitute cheating.

“I did not have an affair,” the Maroon 5 frontman announced in a statement after a series of his texts were made public. “Nevertheless, I crossed the line during a regrettable period of my life. In certain instances it became inappropriate.”

To date, four women have accused Levine of sending inappropriate messages, three of which relate to his current relationship with Prinsloo.

The most prominent among the allegations come from 23-year-old Sumner Stroh, who shared messages between herself and Levine via TikTok. The messages sent from Levine, who at 43 is 20 years Stroh’s senior, include him telling the model, “it is truly unbelievable how f*cking hot you are
like it blows my mind,” and “you are 50 times hotter in person.”

Levine also asked Stroh if she would be okay with him naming his and Prinsloo’s child after her, messaging, “OK, serious question. I’m having another baby and if it’s [a] boy I really wanna name it Sumner. You OK with that? DEAD serious.”

The problem with Levine’s self-assessment of the situation is that he very much did have an affair and very much did cheat on his wife, just not in the traditional sense.

According to Rachel Voysey, a principal psychologist at Sydney’s Relationship Room, Levine’s behaviour is textbook emotional cheating, which involves engaging in behaviour with another person that breaches the trust in a relationship.

“There’s no one singular definition, but it’s something that sits outside the boundaries of what you and your partner have agreed on. Anything outside the agreed transparency and that breaches the intimacy is a form of cheating,” Voysey says.

While many assume a physical affair is the only true form of cheating, Voysey says she sees couples and individuals working through the impacts of emotional cheating on a daily basis and says the fallout from it can be substantially greater.

“Those messages will be seared into her [Prinsloo’s] memory forever; it’s the worst kind of trauma.”

“In my experience, nobody likes the idea of their partner having sex with somebody else but an emotional affair and reading the kinds of messages Levine sent tends to have a much deeper and worse effect on people.”

She explains, “Suddenly, you learn that someone else knows all this stuff that you don’t know about, and the person you’re closest to is sharing themselves with someone else and that’s when intimacy immediately flips into betrayal. Those messages will be seared into her [Prinsloo’s] memory forever; it’s the worst kind of trauma.”

To date, it’s unclear if Levine ever met up with the women he was speaking with, though Stroh is claiming the pair’s affair lasted a year and that Levine had given her “the impression that their marriage was over.”

In messages to another woman named Alyson Rose, Levine wrote, “I shouldn’t be talking to you you know that right?” While Rose says she and Levine never met in person she concedes the messages sent to her by the former judge of The Voice were “not appropriate”.

As to why Levine behaved the way he did, Voysey says we may never know but coming back from this kind of experience in a relationship can happen.

“Humans make bad choices every day; we’re not very good at avoiding the things we know we shouldn’t do. When it comes to overcoming this kind of cheating, it’s about looking at what’s driving this and what they can learn. Going through that can be incredible, but it’s confronting and it takes a lot of hard work.”

And if you’re still unsure as to what crosses a line or constitutes emotional cheating, Voysey says understanding the boundaries is surprisingly straightforward.

“Ask yourself, would you speak to a person the way you are privately in front of your partner? Would you be comfortable with your partner reading those messages? If the answer is no, it’s emotional cheating.”

Make the most of your health, relationships, fitness and nutrition with our Live Well newsletter. Get it in your inbox every Monday.

Most Viewed in Lifestyle