The first of its type was fashioned from two pieces of male underwear 45 years ago. These days, no lingerie drawer is complete without one and so ubiquitous has this cleverly engineered swathe of stretchy fabric become that British women have snapped up somewhere in the region of 7.1 million of them in the past 12 months.

What could this item of clothing be? The sports bra, of course. Distinguished from its everyday cousins by its wider straps, soft band, crossed back and invisible reinforcement to contain rather than lift, the invention of the sports bra has surely done more to support — literally — modern womankind than almost anything else.

This may well explain why in Britain alone in the past year spending on sports bras jumped by a quarter to £72.3million (nearly 10 per cent of all bra sales).

And the significance of the sports bra, or the Jogbra as it was known initially, was underlined this week when the three women (naturally) responsible for liberating millions of women from the perils of too much bounce were finally inducted into the U.S. National Inventors Hall of Fame. 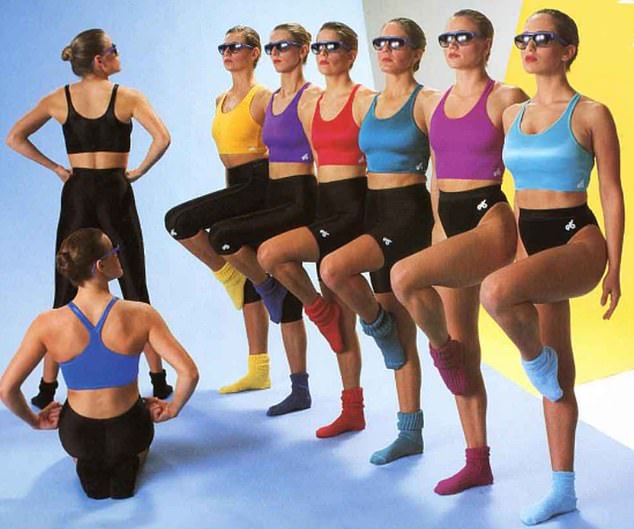 The sports bra was fashioned from two pieces of male underwear 45 years ago. Britain’s spending on sports bras jumped by a quarter to £72.3million last year

Lisa Lindahl, Polly Smith and Hinda Miller quite literally transformed sport for legions of women when they registered U.S. Patent No. 4,174,717 in 1979.

While the humble bra got its first mention in Vogue magazine in 1907, with a piece about a new fangled item of intimate apparel named a brassiere, it would take 70 years until the sports bra came into existence.

The Jogbra was born out of a sudden rise in enthusiasm for jogging in the 1970s, because jogging without the appropriate support isn’t comfortable.

Linda Lindahl, who was studying art at the University of Vermont, had experience of the problem.

‘I had started running. I loved it. It literally changed my life,’ she said. There was just one problem, ‘bouncing boobs’, as she puts it, along with slipping bra straps, hardware that would dig into her skin and material that chafed when she ran. Lindahl’s solution was to wear a bra one size too small on her runs.

Then, on the phone to her sister discussing the problem, one of them quipped: ‘Why isn’t there a jockstrap for women?’ 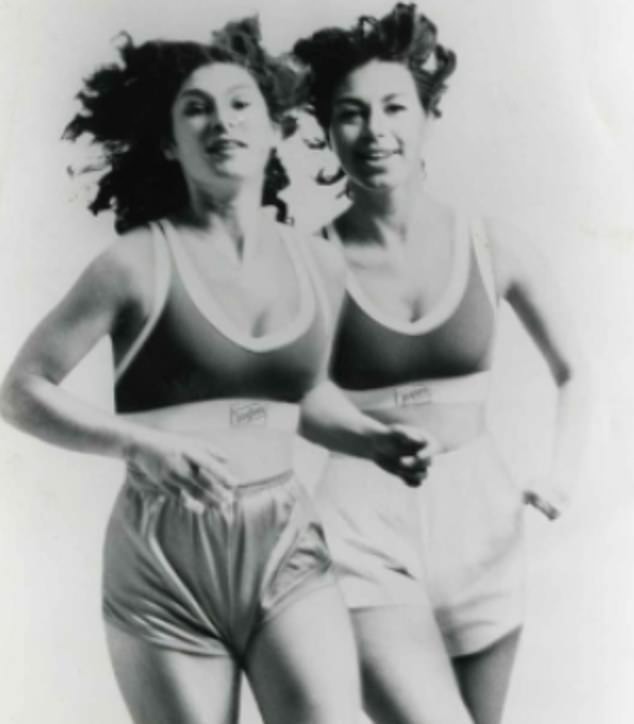 Early adverts in running magazines featured a photo of Lindahl and Smith in their own Lycra fabric blend design. The ads also gave Lindahl’s address and phone number for mail orders. Her phone was soon red hot

It might have been a joke but they were serious about finding a solution. Lindahl enlisted the help of childhood friend Polly Smith, a costume designer. Smith added her assistant Hinda Miller to the team, but did point out that bras were hard to build (there’s a reason Playtex seamstresses helped create spacesuits for the Apollo moon missions).

Undeterred, the women tried several designs (‘she’d make something, I’d go out and run in it,’ said Lindahl) before another jockstrap quip gave Smith her lightbulb moment.

One day, Lindahl’s husband came down the stairs bare-chested, wearing a jockstrap stretched over his torso. ‘Ladies… I present your jock-bra,’ he declared.

It was the ‘fateful moment when all the pieces fell into place’, Smith said.

Miller was dispatched to buy two jockstraps, which they duly cut in half and sewed together, the two pouches becoming cups and the waistbands a rib band with straps crossed in the back.

Testing the creation involved Lindahl running, with Miller running backwards in front of her to ‘see how much I bounced’.

But how on earth do you promote, least of all sell, a sports bra to a market that has never seen one before?

Thanks to a $5,000 investment from Miller’s father, Lindahl and Miller (Smith had already left to join the Jim Henson Company as a costume designer), Jogbra Inc. was formed. Initially, the women had dubbed their creation the jockbra, but the name didn’t stick.

Early adverts in running magazines featured a photo of Lindahl and Smith in their own Lycra fabric blend design. The ads also gave Lindahl’s address and phone number for mail orders. Her phone was soon red hot. 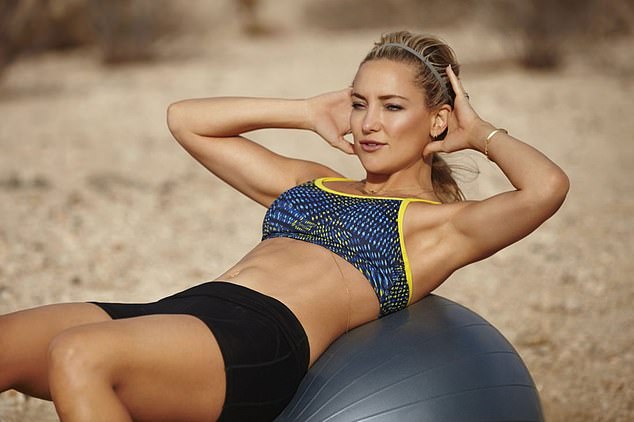 While the humble bra got its first mention in Vogue magazine in 1907, with a piece about a new fangled item of intimate apparel named a brassiere, it would take 70 years until the sports bra came into existence

‘We couldn’t keep up,’ Lindahl said. ‘We were scrounging for clean boxes behind grocery stores to ship them in.’

Expanding was far from easy. One banker, approached for investment, turned them down with the quip ‘Three girls with a bra?!’ Sports shop owners were no less resistant — ‘I can’t carry a bra in my store,’ was one response.

A sense of humour was also essential, which is underlined by Jogbra’s early motto: ‘No manmade sporting bra can touch it.’

And once the ball was rolling, or rather bouncing, there was no stopping them.

By the time they sold Jogbra to Playtex for an undisclosed sum in 1990, the firm was a multi-million dollar international company. Miller stayed on as division CEO until 1997 and Lindahl embraced the life of a painter.

The sports bra industry has continued to rocket. It is ironic to think that Jogbra’s creators once cut up 450 metres of material to make pink and purple bras.

As Miller said: ‘First of all we had white and beige. But we were running these races and we got pissed off because the guys could take their shirts off. We thought we could do coloured sports bras. It was a very big deal.’

The coloured bra sat, unsold. Two decades later, the desire to put the undergarment on the outside blazed to fruition. In 1999, at the Women’s World Cup, the U.S. footballer Brandi Chastain celebrated scoring the winning penalty by whipping her shirt overhead, displaying a black sports bra below.

Some said she was diverting attention from the tournament.

How things change. In 2019, for the first time, teams at the Women’s World Cup included a Nike sports bra as part of their official kit.

But it was the Chastain moment that stood at the start of a revolution that has put underwear modelled on sports bra styles at the top of the lingerie drawer.

No longer is the sporty crop top something to hide, although those who appreciate the engineering prowess of an actual sports bra will point out that just because it looks like a sports bra, doesn’t mean it does the same job. 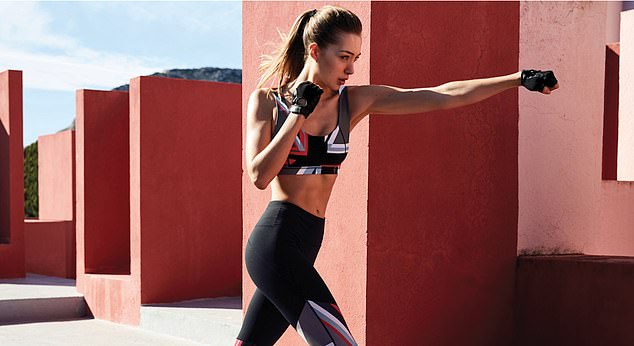 Back in 1984, when a postgraduate student in the U.S. named LaJean Lawson was given a research grant to study breast motion with the aim of learning to build a better sports bra, a watchdog group awarded her research a Golden Fleece award for worst misuse of state tax dollars.

With a doctorate in exercise and sports science, she is now hailed as a sports bra innovator.

And there is no doubt sports bras call upon physics, which is understandable when you consider that breasts contain no muscle, but are, in essence, a mass of soft tissue.

As Dr Lawson once put it: ‘The skin and much of the underlying tissue in the breast is somewhat elastic.

‘So when you have a breast travelling downward at a pretty good rate of speed, and then you change direction as your body hits the ground and begins to rise up again, you can get some pretty drastic acceleration as the breast speeds up to try to catch up with the rest of the body.

‘The point of the sports bra is just to slow all that down.’

Today, you can pick up a sports bra in any colour of the rainbow. And the definition of what constitutes a sports bra — would you wear the same garment for a yoga class as for a 10k run? — has created myriad offshoots.

The athleisure trend has blurred the boundaries further, separating a bra that’s up to the rigours of running versus what is simply more comfortable than squeezing into an underwired affair.

So as we slip into our comfy crop tops and bralettes, it’s clear we owe a huge debt to three women and a couple of jockstraps.