The Tampa Bay Buccaneers on Tuesday visited the White House in celebration of their 2020 Super Bowl win. The visit was spent cracking jokes with President Joe Biden and encouraging more people to get the COVID-19 vaccination.

“I hope you all know just how important it was for, after such a tough year for the nation, in the middle of a long, dark winter, every Sunday, people were able to sit down and watch you play,” Mr. Biden said. “You created memories that helped folks make it through and believe that we could get back to normal again. And you did it as a team, trailblazing, including the first team with two women in full-time coaching positions.” 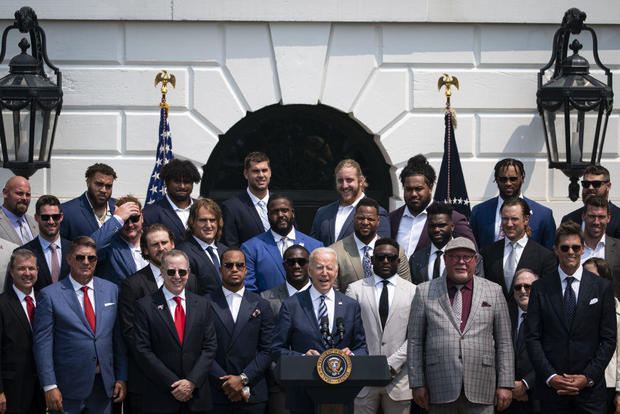 In February, the Buccaneers defeated the Kansas City Chiefs 31-9 to clinch the Super Bowl LV victory. The win gave quarterback Tom Brady —  who had spent the previous 20 seasons with the New England Patriots — his seventh championship, adding to his record of the most Super Bowl wins by any football player. Tuesday’s visit marked Brady’s first White House celebration since 2005, when he and the Patriots won three titles in four years.

Mr. Biden called Tampa Bay a city of “champions,” and pointed to the team’s incredible rise from the middle of the pack during the regular season to Super Bowl champions, saying that the team proved it was never too late to accomplish extraordinary things.

Mr. Biden also highlighted the team’s philanthropic endeavors, including donating millions of meals to those experiencing food insecurity and using their stadium as a voting station and vaccination center, where nearly 200,000 COVID-19 vaccines have been administered.

Per tradition, the Buccaneers presented Mr. Biden with a commemorative jersey with “Biden” emblazoned on the back with the number 46.

Brady exchanged several jokes with Mr. Biden about the team’s unlikely journey, including cracks about Americans who falsely believe Mr. Biden did not win the presidential election.

“Not a lot of people think that we could have won. And in fact, I think about 40% of the people still don’t think we won,” said Brady, which was accompanied by laughter.

“I understand that,” Mr. Biden added with a grin.

Brady also recalled a gaffe of his own which led to the Bucs losing a regular season game and the three-time MVP being given a nickname that mirrored the “Sleepy Joe” moniker used by former President Donald Trump against Mr. Biden during the 2020 campaign.

“We had a game in Chicago where I forgot what down it was,” Brady said. “I lost track of one down in 21 years of playing, and they started calling me ‘Sleepy Tom.’ Why would they do that to me?”