Ian McEwan set off a minor controversy in April when he mused about the possibility of a mental space in which novelists might explore ‘‘the human dilemmas of being close up to something that you know to be artificial, but which thinks like you’’, that wasn’t weighed down by the apparatus of science-fiction, a genre he seemed to dismiss as ‘‘travelling at 10 times the speed of light in anti-gravity boots’’. 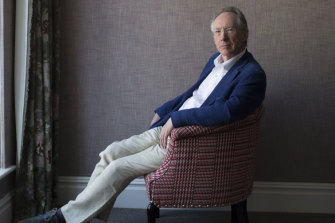 In some respects Ian McEwan’s imagining of an alternative 1980s is the strongest part of his latest novel.Credit:New York Times

McEwan’s remarks were so perfectly calibrated to offend it’s difficult not to suspect they were a deliberate ploy to promote his new novel, Machines Like Me. Set in an alternative 1982 in which Alan Turing was not hounded to an early grave, but instead went on to revolutionise computer science, it centres on Adam, an artificial human who is one of the newest products of this process.

Purchased for an eye-watering £86,000 by the novel’s narrator, Charlie Friend, Adam is part of the first release of such beings, and is advertised as ‘‘a companion, an intellectual sparring partner, friend and factotum who could wash dishes, make beds and ‘think’ ’’. Physically indistinguishable from a biological human, his compact build, dark skin and ‘‘pensively hooded eyes’’ mean he somewhat resembles ‘‘a docker from the Bosphorus’’.

Charlie’s believes his motives in buying Adam are ‘‘pure’’, and in the service of ‘‘curiosity, that steadfast engine of science, of intellectual life, of life itself’’. But as one might expect, it all quickly becomes considerably more complicated.

Much of this complication centres upon Charlie’s upstairs neighbour and sometime girlfriend Miranda. Although the arrival of Adam, and Charlie’s decision to ask her to help him program Adam’s personality, brings Charlie and Miranda closer together, it also complicates their relationship, especially when Miranda invites Adam into her bedroom one evening. 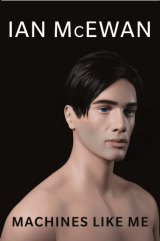 Aside from a badly misjudged element recapitulating the central plot device of Atonement, the novel’s portrait of the relationship between Charlie, Adam and Miranda is rendered with McEwan’s characteristic skill and black humour.

Yet despite the surefootedness of the human aspects of the novel, the science-fictional elements are considerably less successful. This is doubly problematic because McEwan is entering such a crowded field. Even the most casual consumer of science-fiction will be familiar with the Promethean replicants of Blade Runner, desperate to grasp one more day of life, the murderous Cylons of Battlestar Galactica or the manipulative Ava of Alex Garland’s Ex Machina, to say nothing of the many excellent literary treatments of the subject.

But it is also that, despite its pretensions, Machines Like Me has surprisingly little to say about the metaphysical implications of artificial intelligence.

In part this is a result of the novel’s narrative structure, and the fact that because Adam’s personhood is never really in question, the novel lacks the shiver of the uncanny that lends so many narratives about artificial intelligence their power.

It is also because, although the novel gestures towards an understanding of the ways in which the recognition of the humanity of the machine forces us to recognise the inhumanity in ourselves, or of the complex ways the otherness of the artificial being unsettles our assumptions about our own place in the universe, it never really seems committed to exploring these questions in any meaningful way. And while it is more successful as an exploration of the ethical dimensions of artificial intelligence, its desire to preserve something ineffably human holds it back from really interrogating the implications of Adam’s existence.

Oddly enough, the novel’s real success does not lie in Adam, but in the world McEwan has created. For despite its problems – McEwan is scathing of the Bennite Labour government that succeeds Margaret Thatcher and withdraws Britain from the European Union – it is, in many ways, a better world than our own, a place where foundational advances in computer science have been released as open source instead of being locked up by transnational corporations, and where the future still has some chance of belonging to all, instead of a few. Even the novel’s imagining of Britain’s crushing defeat in the Falklands reads like a kind of wish fulfillment.

To call such a world utopian might sound like a stretch. But in a highly qualified way, it is, and that lends McEwan’s imagining a radical dimension the rest of the novel lacks, reminding us that ‘‘the present is the frailest of improbable constructs. It could have been different’’.

James Bradley most recent novel, Clade, is published by Hamish Hamilton at $32.99.