Prime Minister Scott Morrison has dismissed talk of an early election and delivered a warning to government MPs about the danger of complacency, as he signalled new policy ambitions on workplace relations and employment.

Mr Morrison declared he was a "full-termer" and rubbished the idea of exploiting the government's strong position in the opinion polls to call a snap election. 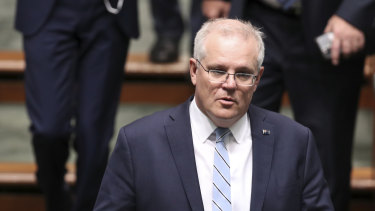 Scott Morrison says there will not be an early election.Credit:Alex Ellinghausen

"In a political cycle there are good times and bad times," Mr Morrison told the weekly meeting of Liberal and Nationals MPs.

"There's a risk in good times, when things are going well, you can fall prey to complacency, to disunity, to the work rate dropping off. You get distracted. That's bad for governments. It's even worse for the community and the people you are meant to serve."

"So discipline and focus is more important than ever."

After that, Mr Morrison made a clear remark to the assembled MPs about his intention to run a full term, in a message described by a Coalition spokesman as a "clear and deliberate" statement.

"I'm a full-termer, elections are too hard to win,” Mr Morrison told the room.