Prime Minister Scott Morrison has declared himself the underdog in next year’s federal election amid a political fight over his decision to lock in his climate change target for 2030 despite a global deal that asks governments to set more ambitious goals within a year.

Mr Morrison said it was “fairly clear” he was the underdog as he intensified his campaign in marginal seats ahead of the election due by May, while claiming Labor would increase petrol prices, electricity prices and interest rates. 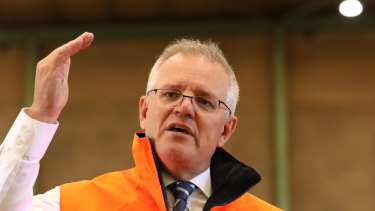 Prime Minister Scott Morrison has declared himself the underdog at the next election.Credit:Dominic Lorrimer

The claims, made without reference to Labor policies, step up a political clash on the economy while Labor leader Anthony Albanese accuses Mr Morrison of breaching a pledge at the United Nations climate summit in Glasgow within 24 hours of signing up to the global deal.

The Glasgow agreement says signatories agreed to request governments to “revisit and strengthen” their 2030 targets to reduce greenhouse gas emissions by the end of next year while “taking into account different national circumstances” in setting the goals.

Asked on Monday whether he would increase his target for 2030, Mr Morrison emphasised the global deal was only a “request to revisit” and did not mean he would change stated government policy to reduce emissions by 26 to 28 per cent by 2030 on the levels of 2005.

However, he repeated his promise that the government would be able to cut emissions by 35 per cent, going beyond the formal target.

“That is what we’re going to achieve and that is what actually matters. What matters is what you actually achieve and so we are well above our target,” Mr Morrison said while campaigning in Penrith, in the marginal electorate of Lindsay in western Sydney.

Mr Morrison rejected a claim from United Kingdom Prime Minister Boris Johnson that the Glasgow deal was the “death knell” for coal because it included language about a “phase-down” the use of coal even though there was no pact to phase out the fossil fuel.

The Glasgow climate summit ended on the weekend with countries signing up to a pact with a section that “requests parties to revisit and strengthen the 2030 targets in their nationally determined contributions as necessary to align with the Paris Agreement temperature goal by the end of 2022, taking into account different national circumstances.”

The Paris Agreement temperature goal, agreed in 2015, is to limit the rise in global temperatures to well below 2 degrees Celsius, something the United Nation says will require a 45 per cent cut in emissions by 2030 from major economies.

Mr Albanese said Mr Morrison was breaking a deal within a day of signing the Glasgow agreement.

“This is a Prime Minister who leads an entire government now that walks away from its own words and its own commitments within 24 hours,” he said.

Greens leader Adam Bandt said the Glasgow agreement heightened pressure on both major parties to increase their 2030 goals. Labor is yet to set a new target for that after advocating a 45 per cent cut at the last election. The Greens want a 75 per cent cut.

While the Coalition and Labor have both promised to cut emissions to net zero by 2050, the Greens say the target should be reached by 2035.

The last date for the next election is May 21 next year, according to an analysis by the Parliamentary Library, although many within the government believe a March poll is possible if Mr Morrison goes into a formal campaign soon after Australia Day.

An election in April or May would give the government more time to fight on the economy by releasing a federal budget before the campaign, something Mr Morrison did in 2019 and has suggested he expects to do again.

Asked if he was the underdog, Mr Morrison said: “I think that is fairly clear. But I have been there before, on more than one occasion.”

Opinion polls suggested Mr Morrison would lose the May 2019 election but he held power with 77 out of 151 seats in the lower house. A Newspoll survey published in The Australian on Monday said the Coalition had a primary vote of 37 per cent, Labor 38 per cent and the Greens 11 per cent, suggesting the government would lose after preferences.

The Resolve Political Monitor published in The Sydney Morning Herald and The Age last month showed the Coalition had a primary vote of 37 per cent compared to 34 per cent for Labor and 11 per cent for the Greens, also suggesting the government was behind after preferences.

In a sign of the intense campaign under way months out from the election, Mr Morrison said in his remarks in Penrith that a Labor government would increase petrol prices, electricity prices and interest rates.

Labor is yet to reveal an interim emission target for 2030 and any implications for petrol or electricity, while its existing climate policies call for a consultation on fuel standards and a major investment in the electricity grid.

The Reserve Bank signalled on November 2 that an increase in interest rates in 2023 was “entirely plausible” but pushed back at suggestions it could be lifting rates early next year.