A splintering in political support has challenged the Liberal and Labor parties in the heartland seats both need to hold to claim government, with Australians swinging behind independents, minor parties and the Greens.

Coalition and Labor insiders claimed conflicting signs of hope for their parties in the first results from the federal election, with neither side gaining a convincing lead due in part to the fragmented vote. 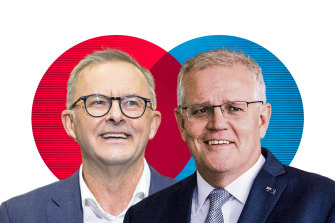 Anthony Albanese and Scott Morrison: Liberal and Labor insiders claimed conflicting signs of hope for their parties in the early results.Credit:Fairfax Media

Allies of Prime Minister Scott Morrison pointed to swings in their favour in some marginal seats the government needs to hold to stay in power, countering recent polls that projected a national swing that could sweep Labor leader Anthony Albanese into power.

Labor deputy leader Richard Marles said he was hopeful of victory but thought the party was facing a significant challenge.

“We feel we are competitive, but we are coming out of a pandemic where, around the world and around Australia, that has been a situation which has favoured incumbents,” he told the ABC at around 7pm.

“And so this is a pretty big mountain for us to climb, but we feel we put forward an alternative that the Australian people have been crying out for, and we are hopeful.”

“I think Labor will win but I think things are very much tightened up in the last six weeks and what looked like a blow-out is obviously much closer,” he said, adding that Labor would surpass the 76 seats it needed to hold power in its own right.

“I think Labor will win high-70s, Coalition mid-60s and then maybe six or seven independents.”

The early results, however, showed both major parties were facing challenges in key seats, with the Liberals under threat in the Melbourne electorate of Chisholm.

Labor appeared to suffer a swing against it in the western Sydney electorate of Parramatta as well as the south-western Sydney seat of Fowler, where Labor home affairs spokeswoman Kristina Keneally is seeking to move to the lower house.

Independent MP Zali Steggall looked set for a comfortable victory in her seat of Warringah in northern Sydney against Liberal challenger Katherine Deves, one of the most contentious candidates in the election due to her strong public comments about transgender people in sport.

NSW Premier Dominic Perrottet said on Saturday the party had to rethink the way it chose its candidates after the experience of the 2022 campaign, while federal Finance Minister Simon Birmingham expressed similar concerns on election night.

Birmingham said there were “clear mistakes” and “process breakdowns” in the pre-selection of Deves.

“There are lessons to be learned, as I’ve indicated, and I expect wherever we go, hopefully still into government, we have to heed those messages,” he said.

ABC election analyst Antony Green calculated in August that Labor would need a national result of 51.8 per cent in the two-party vote to form government, but warned against assuming a uniform swing.

Green estimated the Coalition started the campaign with 76 seats while Labor had 69 of the 151 total, taking into account redistributions in Victoria and Western Australia since the last election.

Marles acknowledged the early results showed swings in favour of Clive Palmer’s United Australia Party, adding to the unpredictability of the election result.

“We’ve taken nothing for granted and so we’ve been really mindful of the huge amount of money which is being spent by the United Australia Party and I think the message has resonated more in outer suburbs than in the inner-city suburbs.”

Labor officials claimed the party was ahead in Chisholm, Bennelong in northern Sydney and the Queensland seat of Dickson, held by Defence Minister Peter Dutton.

Birmingham said the early results suggested seats were changing hands in both directions, a scenario that could enable the government to prevent Labor forming a majority in its own right.

“Initial discussions about whether we might see seats changing hands in both directions are looking [correct] …that might well be the case tonight,” he said, adding the signs for the government were positive in two Labor seats – Gilmore on the NSW south coast and Lyons in northern Tasmania.

“Looking at some very early figures in Lingiari that show there could be movement in the Territory, too, but they are very early.

“We are clearly seeing the Greens having very strong votes in some of those inner-city electorates and that will potentially present challenges for both parties.”

Labor education spokeswoman Tanya Plibersek told the ABC there were positive signs for the Opposition in key seats in NSW and Victoria.

“Seats with quite narrow margins like Macquarie and Dobell in the Labor column, the early results are looking very good for us to hold those seats.

“We are also looking good in seats like Banks, Bennelong, Reid, maybe both Chisholm and Deakin in Victoria.”

The Australian Electoral Commission began counting at 6pm but played down hopes for a swift result by noting it had received 2.7 million postal vote applications in this campaign, up from 1.5 million at the last election, and would not start counting them until Sunday afternoon.

Ballots cast during the two weeks of early voting were counted from Saturday afternoon.