Seen one art fair, seen 'em all? Not when it’s the India Art Fair in New Delhi. Like everything else on the subcontinent the premier commercial art event is very different in character to the fairs one sees in Europe or America, or even Hong Kong. This is largely because of its proudly provincial stance. Seventy per cent of exhibitors are Indian, providing a unique survey of an art scene in which a deep respect for tradition jostles against a burgeoning cosmopolitanism. 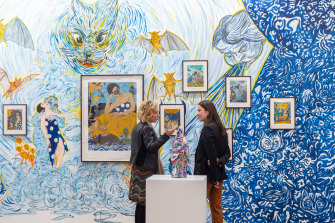 It’s hard to imagine how long it would take to track down roughly 60 galleries in New Delhi, Mumbai, Kolkata, Hyderabad, Chennai, even Vadodara and Bengaluru.

In India, every venture outside one’s front door is an excursion into the unknown. It’s frustrating but also exhilarating – a field of competing energies that keeps the senses in a state of high alert. No wonder the country’s age-old spiritual quest is to attain complete indifference to earthly things. Between chaos and the void, there lies India.

For director, Jagdip Jagpal, born and bred in London to Indian parents, the provincial nature of the fair is its greatest strength. In the three years she has been in charge, Jagpal has worked to give the event a clear sense of identity. “Why would people come to India,” she reasons, “to see the same galleries and artists they could see in New York or London?”

For overseas visitors, the attraction of the IAF is the lure of the exotic – a sample box of new sensations for collectors willing to step outside their comfort zones. Throughout the event, plenty of eager art tourists could be seen clustered into groups organised by leading museums, chiefly from France and the United States. 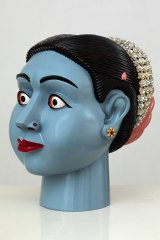 If foreign collectors have already become acquainted with the major Indian galleries at other fairs the first point-of-call would be DAG (the only Indian dealer with a branch in New York); then Vadehra, Sakshi, Nature Morte and Chermould Prescott Road. These were the booths where one might find work by the best-known Indian artists, but it was no less exciting to discover unfamiliar figures. Jagpal made it part of her strategy to ask every participant to bring something by at least one new artist.

Although every art fair aims to attract international collectors, it’s the local audience which is most important. As we’ve seen in China and Indonesia it takes time for a culture of collecting to develop, as new money finds its way into an emerging art market. India may have its share of billionaires who dabble in the contemporary art scene but the crucial feature is the growth of a better-educated and more widely-travelled middle-class.

In India the brightest cultural initiatives are undertaken by private foundations and museums such as the Kiran Nadar Museum of Art, the Devi Art Foundation, the Gujral Foundation and the Serendipity Arts Foundation. Government funding for the arts is virtually non-existent, leaving public museums in a state of woeful poverty.

For a regional art fair the key to longevity is an organic market that evolves alongside one of those booming economies which are transforming countries such as India and Indonesia into superpowers. The crucial elements are stability, continuity, and the (inevitable) discovery of art as a means of beautifying money and conferring status.

To persuade audiences of India’s place within the international art ecology the fair needs a few big-name contemporary dealers. This year the star attractions were David Zwirner (New York, London, Paris and Hong Kong), and neugerriemschneider of Berlin. The former featured a painted installation by Marcel Dzama which echoed Bollywood film posters; the latter took a chance on large-scale pieces by Ai Weiwei and Olafur Eliasson. 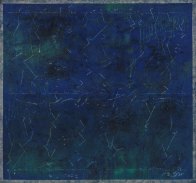 A detail of Ganesh Haloi’s Untitled, 2018.Credit:Courtesy of Akar Prakar

The fair’s major corporate support came from BMW, which exhibited a car painted by Andy Warhol. If ever the day arrives when BMWs outnumber Maruti Suzukis on the streets of New Delhi, India will be the most prosperous nation on earth.

As India is perennially one of the most politically combustible of countries, it’s not surprising that a number of works took oblique shots at the government, yet politics seemed less of a preoccupation than a strong sense of tradition. DAG reigns unchallenged as the leading showcase for Indian modernism, as practised by local masters such as M.F.Hussain, S.H.Raza, F.N.Souza, K.H.Ara and Jamini Roy, but one might also appreciate the way Bengali artist Soma Das has reinvented Indian miniature painting with her pictures at Emami Art; or the vibrant works of Dhavat Singh, at Gallery Ragini, which grow directly out of tribal art in Madhya Pradesh.

Perhaps the most daring experiment came from the Crayon Art Gallery, which showed a single painting and a matching oleograph by Raja Ravi Varma (1848-1906), who pioneered the painting of the Hindu legends in a westernised style. To add a touch of theatre the picture and its echo were displayed, spot-lit, in a pitch dark room. I didn’t ask the price.

Even if I had been eager to purchase such a work it’s unlikely that I would have been allowed to do so. In the 1970s the Indian government nominated nine artists as “national treasures” whose works would not be permitted to leave India. This policy, intended as a mark of respect, has probably retarded the global recognition of Indian modern art. Imagine if paintings by Monet or Matisse had never been allowed to leave France.

Indian galleries are taking the contrary approach today, looking to place items by living artists in public and private collections around the world. Towards this end the New Delhi galleries hosted some excellent shows during the fair. Shrine Empire, which specialises in more experimental work, featured Shambhavi, an artist who makes evocative, textured wall pieces using natural clays and ochres; Akar Prakar hosted an exhibition by veteran abstract artist, Ganesh Haloi, which will travel to America later this year. Vahedra Contemporary showed new paintings and assemblages by Atul Dodiya, who told me he already has works in at least three Australian collections.

Perhaps the most engaging display was at Vahedra’s other outlet, namely vibrant new life-sized sculptures by Ravinder Reddy, along with a selection of earlier works. Reddy was probably the best represented artist at the fair, with sculptures in four separate booths. He has gradually become an iconic figure in Indian art, known for taking the sensuous forms of temple sculpture and giving them a contemporary makeover. Reddy is famous for his curvy nudes, which may offend more puritanical sensibilities but are vastly less explicit than those sexy stone carvings we admire on temples such as Khajuraho. In Indian art, past and present, the sensuous is never very far away.

After a few days of intensive exposure to this art fair, one begins to imagine a surging, vital life force in every stray piece of paper.