The Labor Party’s proposal that Australia should offer to host a United Nation’s climate conference with the Pacific would only be welcomed if it demonstrated a clear commitment to addressing climate change, says former Kiribati president Anote Tong. 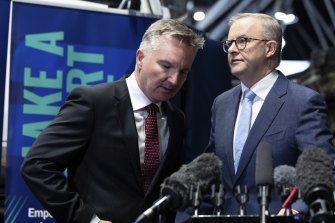 Mr Bowen said offering to co-host the UN’s annual Conference of the Party’s meeting with Pacific island nations would, “send the message to the world that Australia is under new management when it comes to climate”.

Mr Albanese said “dealing with climate change” and offering to host the COP talks would also help strengthen relations with Solomon Islands, which has just signed a security pact with China.

But Tong, a veteran of global climate diplomacy, said such a meeting would be irrelevant if it was not backed by a clear commitment to improving Australia’s track record on climate.

“There has been too much posturing [on climate] globally and we need to see a genuine effort to transition away from fossil fuels,” he said.

“It doesn’t matter where the meeting is held. It could be held in Russia and it would not make any difference if Australia demonstrated a genuine and enduring commitment,” he said.

Supporting ongoing thermal coal exports did not demonstrate such a commitment, he said.

Labor has committed to reducing Australia’s emissions by 43 per cent by 2030 compared with the government’s 26 to 28 per cent. Labor also plans to increase the amount of renewable energy in the National Energy Market to 82 per cent by 2030, and spend $20 billion updating the transmission network.

But it has also promised it would not introduce any measures that would disadvantage Australian coal exports compared with their international competitors.

Mr Bowen told the Herald and The Age that a Labor government would work closely with interested Pacific partner nations on the format of a COP with the assistance of a Climate Change Ambassador who would be reinstated through the Department of Foreign Affairs and Trade.

Energy Minister Angus Taylor said the money spent on a COP could be better allocated elsewhere.

“Labor are showing their true priorities. The hundreds of millions of dollars they’ll spend on hosting a conference like this would be better spent upgrading hospitals, schools and roads, or funding national security initiatives in the Pacific that actually deliver a tangible benefit to the region.”

Climate and energy program director at the Australia Institute Richie Merzian, who has served as a climate negotiator for Australia at previous COPs, said the offer to host the meeting was significant.

“It would kill two birds with one stone. It would help ease tensions in the Pacific and it would reset Australia’s reputation on climate.”

But he said any incoming Australian government would have to move fast to secure one of the meetings in the near term.

“Partnering on the UN’s largest event would demonstrate solidarity with our neighbours over the existential threat posted by climate change in our region – it would be a major diplomatic feat.”

Pacific nations have long been calling on Australia to take a stronger stance on climate, not only by increasing its own efforts to reduce emissions, but by joining with the Pacific to call on larger emitters, such as China, to act faster.

Last week a group of former Pacific leaders including Tong signed a statement calling on Australia, China the US to act faster on climate.

“The group called on regional partners, “particularly Australia, to undertake credible and urgent actions on climate change, to demonstrate their genuine commitment and empathy for this biggest security threat to the Pacific Island states,” they wrote.

A guide to the environment, what’s happening to it, what’s being done about it and what it means for the future. Sign up to our fortnightly Environment newsletter here.