A lone farmer strides square-shouldered and resolute across a drought-stricken paddock into a towering red dust storm.

It is a terrible and beautiful image that at the same time manages to hint at a brighter future, symbolised by the sunlight piercing a tiny gap in the lowering clouds.

The photograph of farmer David Kalisch on his property in Forbes is the winner of this year’s National Photographic Portrait Prize It’s the work of Sydney photographer Joel B. Pratley. 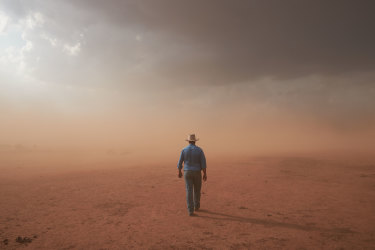 Drought story 2020 is this year’s winner of the National Photographic Portrait Prize.Credit: Joel B. Pratley

One of the judges, Australian photographer Bill Henson, compared the shot, entitled Drought Story 2020, to a painting by Belgian surrealist Rene Magritte.

“The longer that you look at the picture … the stranger it gets and the more mysterious it becomes,” Henson said.

Pratley was working in December alongside a film crew making an ad for the farm charity Rural Aid when the storm struck the central west property. 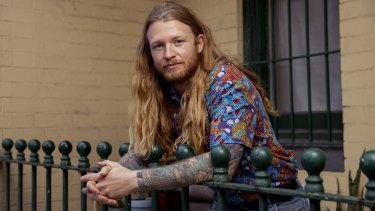 ‘My feet haven’t touched the ground yet’: Winning photographer Joel B. Pratley.Credit:Dominic Lorrimer

“David’s composure during the storm was surreal because he is just so used to it,” he said. “For me, it was just like being on Mars.

“The ferocity with all the sticks and stones flying around and the dust was incredible. We were shooting like mad when it came. Something as simple as walking off into the distance took on a whole new meaning.”

Pratley, who specialises in work for not-for-profits as well film and TV, learned of his success earlier this week.

“My feet haven’t quite touched the ground yet,” he said. “I was stunned. To be a part of the competition is already a win. I’ve never really won anything in my life so for this to happen after working away at what I do for 10 years… For people to take notice… I couldn’t believe I won personally but I do believe in the image.”

Bells Beach photographer Julian Kingma was highly commended for his image of a young swimmer cooling off in a stormwater drain. This year, the judges selected a record 79 finalists, in recognition of how the pandemic has affected artists everywhere.

The first prize was announced on Friday and comes with $50,000 in cash and camera gear.

Pratley will give some of the money to the Kalisch family “so they can fix something up on the farm or go on a holiday or whatever”.

“I also plan to start selling the image,” he said. “All the profits will go to Rural Aid.”