There’s an air of anxious anticipation at the ESPN Wide World of Sports Complex in Orlando, Florida, where a palpable feeling of nervousness underlies crackles of excitable voices.

Competing against six other teams from across the globe, a group of teenage girls wearing neat red and white uniforms and mega-watt smiles, take to the stage.

Suddenly, a loud, thumping electronic beat kicks in, and the team spring into action, throwing themselves into a high-octane routine. Backflips, stunts and acrobatics fill the two and a half minute performance, which finishes with such self assurance, it sends the crowd into a frenzy.

From the reaction of the audience, it’s clear who is winning gold in the Youth All Girls Median division, at the International Junior World Cheerleading Championships today.

However, it’s not an American cheerleading team that’s taking home the top prize, as you’d may expect. These champs are Team England Cheer – the creme de la creme of 89,000 cheerleaders within the UK. And they have just beaten cheerleaders from all over the world to pick up their fifth gold medal.

Cheerleading is thought to be one of the fastest growing sports in the UK, with an estimated 37% of schools offering the sport as an extracurricular option for physical education.

Teenager Heidi Beaumont was one of the winning team crowned world champions of their division just last week. It was a huge moment for the 14-year-old, marking the first time she competed in Orlando. 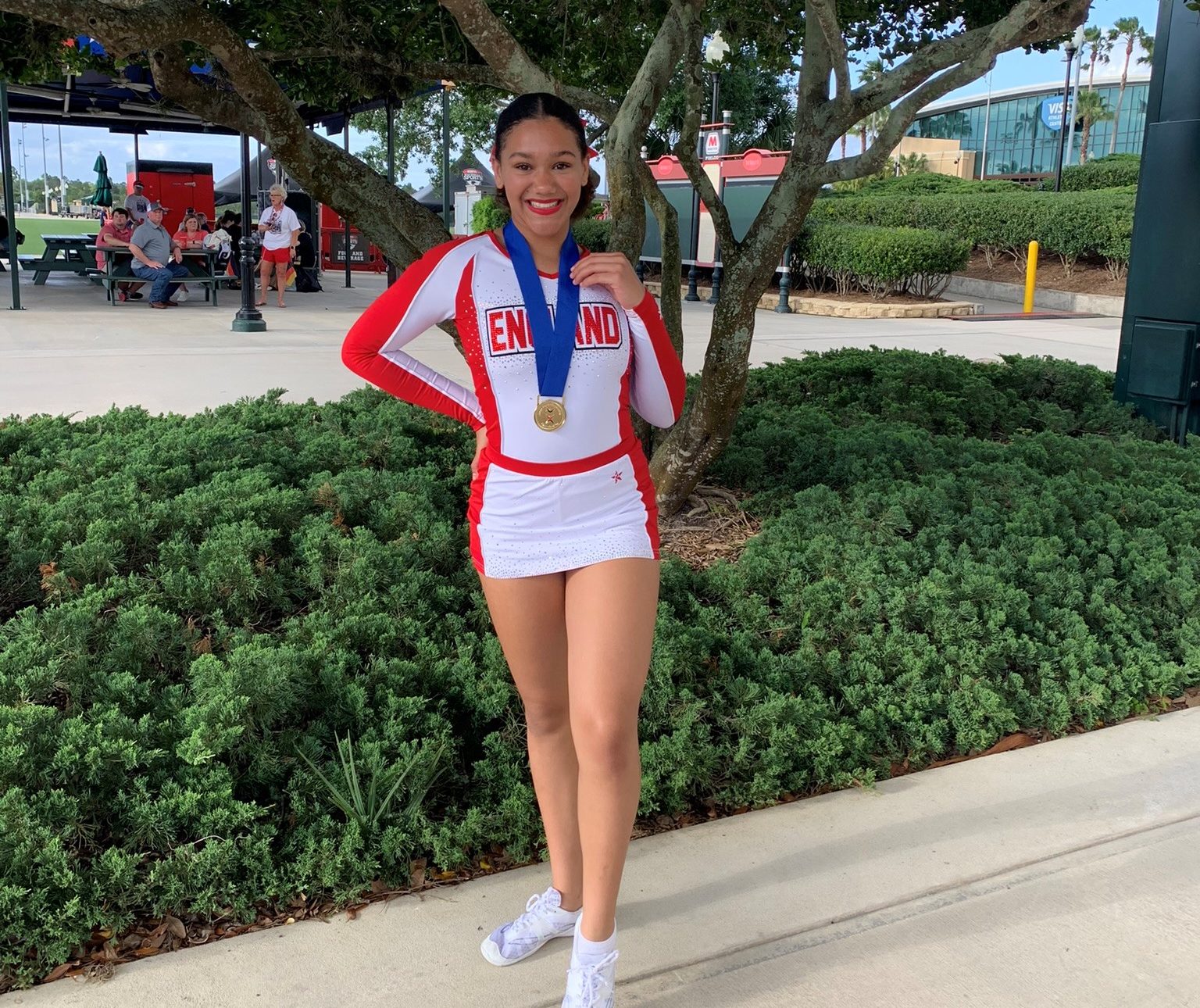 She only took up cheer three years ago, when she was looking for something to do during the summer holidays.

‘I’d done gymnastics before, and I’d been dancing since I was younger,’ Heidi explains. ‘It was just a combination of both of them – the perfect sport for me to do.’

Having fallen in love with cheerleading, or ‘cheer’ as it’s more colloquially known, Heidi trains around 13 hours every week, fitting school work and socialising around her hectic schedule.

‘It’s a lot of hard work and dedication, but it’s worth it in the end,’ she says.

Those more ignorant to the world of cheerleading may wonder how much ‘hard work’ is needed when the sport is often depicted on screen as bitchy teenage girls, grabbing pom poms and swooning over footballers – but thanks to the warts and all insight from Netflix documentary series Cheer, which first aired in 2020 and saw its second controversy-filled series hit the screen earlier this year, it’s a myth firmly being dispelled.

In Cheer, viewers were exposed to the cutthroat world of the billion dollar cheer industry. Focusing on the Navarro College Bulldogs Cheer Team from Corsicana, Texas, youngsters juggled daily three hour training sessions alongside a litany of injuries, including numerous concussions, in a bid to win National Cheerleading Championship. The six-part first season was one of the first shows to sneak a look behind the curtain to show the realities of cheerleading as an intense sport.

‘People think it is just prancing around, cheering for other people,’ explains Angela Green, co-founder and coach for Team England Cheer.

‘It’s more akin to gymnastics and acrobatics. There’s a tiny bit of dance in it, but it’s very athletic, very high intensity and you have to be incredibly strong to do it.

‘A lot is packed into those two and a half minute routines, they’re physically demanding. You’re expected to do it all, and do it with a smile.’

Angela’s route into cheer was unorthodox; having been involved with the local church in Newham, East London, as a teenager, she found herself drawn into the sport when the vicar’s wife, who was American, started a cheerleading team to quell her own boredom.

The group eventually evolved into the Ascension Eagles, which Angela, now 40, still coaches to this day.

‘There’s not a lot of team sports for girls, and this is predominantly female sport that shows athleticism and strength,’ she explains. ‘You get to be feminine and wear lipstick and a bow, but be fit at the same time.

‘However,’ Angela laughs, ‘There’s not a pom-pom in sight.’

As the team’s success has grown over the years, they’ve seen a rise in people wanting to join their ranks. ‘This year we had 120 athletes going for just 24 spaces on one of our team,’ says Angela.

Cheer’s wide breadth of roles allows for athletes with a spectrum of skills to participate: as well as ‘flyers’ – the flexible cheerleaders that stand at the top of human structures, there are ‘bases’ – strong athletes that hold flyers, and ‘spotters’ whose primary responsibility is to watch the stunt and assist the flyer in the case of a fall or accident.

Having initially been conceived as a way to support sports teams, competitive cheer became a sport in its own right in the 1960s in American colleges. When it comes to competition, cheerleaders are marked on their routines, and how clean and sharp their stunts and performances are.

While Angela and Heidi both took up cheer relatively young, which allowed them to try numerous roles, cheerleading’s growing popularity has meant older athletes have taken up the sports later in life.

Jack Jacobs may not look like stereotypical cheerleader (he’s male, for a start) but he found himself captivated by the sport when he started at Loughborough University in 2019.

Having done gymnastics when he was a child, Jack, now 20, was the first boy to make the competitive Loughborough University cheerleading squad.

‘We won the National Championships that year,’ he says. ‘Now, I’m the first male Chair of Loughborough University’s cheer team.’

While the team welcomed Jack, others were less understanding about why a boy would want to join such a female-dominated sport.

‘My dad was a little more uncertain,’ he admits. ‘I think he thought it was a very girly sport to do and he didn’t like that. But he’s seen how much effort I’ve put into the sport, how athletic we are, and how far we’ve gone in nationals. He understands the sport a lot more now.’

Despite the visible athleticism and strength cheerleaders demonstrate, cheer is not a formally recognised sport by Sport England.

‘It’s something we’re working on,’ Angela says. ‘We don’t get funding from Sport England at the moment. Everything we do is self-funded by the children and their families.’

The lack of cash means things can get costly for some students who look to compete on a wider scale – while Team England does not charge any training fees, with coaches volunteering their time and expertise, local level teams often mean people are forced to fork out.

‘We pay monthly fees for Heidi to train with her local team, the Black Ice Academy, which covers team training, tumbling and flexibility classes,’ Heidi’s mother, Emma Bannister, explains. ‘With competitions like the junior championships, sometimes you can get sponsorship.

‘Team England has had a lot of sponsorship for their uniforms, training kit, shoes and bags, from big brands like Power Nation, Nfinity, Varsity Europe and Puma among others, which we’re thankful for.

‘You do have to pay for the costs to get here. Some teams have full paid or part paid bids, where the sponsors pay towards it.’

While being on the cheer team at Loughborough University has meant costs are relatively low, Jack, who is currently on a placement year in London as part of his degree, has found costs far higher for his new team, London Dynasty Cheer.

‘With training costs, competition fees and kit, it has totalled to approximately £1500 for the year,’ Jack says. ‘There’s a lot of costs that go on top that do mount up. I’m struggling as it is to pay for cheer, but it’s something I love doing so I’ve sacrificed other things to keep going. It’s definitely a barrier for people who don’t earn enough.’

It’s this passion for cheer, despite its financial burden, which may be one factor which spurs cheer athletes to keep at the sport.

Even when cheer training was cancelled during lockdown, Heidi kept up her gruelling regime, attending classes over Zoom for up to two hours at a time. Her parents also splashed out on a tumble mat, which can cost upwards of £130, so Heidi could keep practising safely.

Jack admits he has had more difficulties in maintaining his strength while being away from university.

‘I’ve struggled this year a lot more,’ he says. ‘It’s very physically tough, and I’ve struggled with fitness, which makes me sometimes dread going to training as I know it’ll be intense.

‘It’s a team sport and you’re working with other people in a stunt group under such close confinement – it can lead to arguments, sometimes, especially if you can’t nail a routine.’

While frustrations can boil over in any team sport, those involved in cheer insist that having to work together for several hours a week usually leads to squads being inseparably close.

‘Because cheer can run your life, you make really close friends,’ Angela explains. ‘You’re training together, you socialise together. Even when you’re competing in other teams as rivals, you become close off the mat.’

And a sense of closeness is a necessity in this sport, as a lot of trust is needed in cheer: flyers are dependent on their bases and spotters to stop them from getting seriously injured.

Jack has seen some horrifying injuries throughout his three years as a cheerleader.

‘Cheer is one of the most injury prone sports I know of,’ he says. ‘It can be very dangerous. Personally, I’ve badly sprained my ankle at least four times. I’ve been on crutches.

‘One training session, one girl got thrown and landed directly on her back. Luckily, she was fine, but it did serve as a reminder of the danger. There’s always paramedics on standby at competitions because of how injury prone it is.’

Thankfully, Team England has been spared from anything too frightening.

‘We’re very lucky,’ Angela says. ‘There are sprains, rolled ankles, but the coaches are fully qualified, we’re as safe as we can be and so to be honest, the injuries we get are minimal.’

Injuries aside, cheer has opened up so many opportunities for young people, changing their perspectives and mindsets.

‘The change we see can be incredible,’ Angela says. ‘There are some kids that are quite shy generally, hanging with their parents during their first training session, but as it’s a performance-based sport, you really grow in confidence.’

It’s something Emma has really seen in her daughter.

‘Heidi has gained so much confidence,’ she says. ‘She is very focused on what she wants to achieve both in cheer, and with friendships and school. She has become very determined.  It’s been so amazing for her mental wellbeing as well as keeping her physically fit.’

And with the sport continuing to grow in popularity, Angela is keen to see many more new faces taking up the sport.

‘I always tell people to do it,’ she says. ‘It’ll change your life. You’ll make great friends and lifelong memories with people who will stay with you beyond your time in cheerleading.

‘Cheerleading definitely changed my life. I’ve been given so many opportunities because of it. I would encourage anyone to give it a go.’