During the months of December and January, the number of calls to suicide support charities can double. However, for those who work in them, they’re not a place of sadness and helplessness – but one of hope. Here the founder and CEO of Suicide Crisis, Joy Hibbins, explains why.

Just a few days ago a lone figure was captured on our CCTV pacing up and down outside the Centre in Gloucestershire as dawn was breaking.

It was biting cold and his face was etched with pain.

Although he approached the front door, the man was hesitant to ring the bell, even turning at one point, ready to walk away. But then the front door opened and one of my colleagues stepped outside to talk to him.

Speaking gently, she encouraged the man to come inside, and in response to her kindness, he quietly told her that his name was David. He was then greeted by another volunteer called Al Fawk, who asked if he would like a hot drink.

The pair spent a few minutes together chatting, before David went off to talk in detail to another crisis worker. 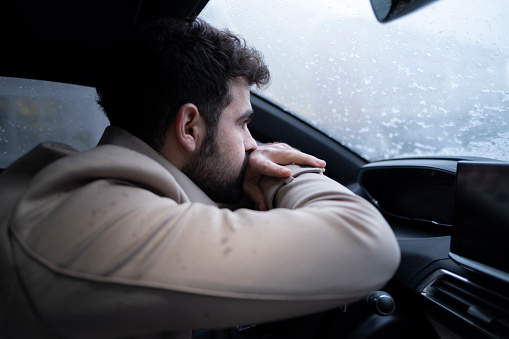 As he watched him go, Al understood – on a very profound level – what it was like to feel as David does. As, a decade ago at Christmas, he was in a similar situation, experiencing a suicidal crisis for the first time in his life.

Talking about what he went through, Al explains, ‘It was a combination of things. My marriage broke up at a time when I was already depressed after a serious illness, and had to give up work.

‘It can be very hard to take the first step to asking for help – particularly if you’re a man in your middle years who is used to supporting everyone else in your family.

‘You’re used to being there for other people. I had never spoken about painful experiences I had been through before. I recognise that hesitation to ring the doorbell that David felt this morning.’

The risk that Al describes for men in their middle years is borne out in national statistics, with the 2021 ONS figures confirming that among males, the suicide rate is highest in those aged 50-54, and among females, 45 to 49 years.

He credits the charity with saving his life, after being looked after by the team for a period of several weeks, receiving daily support when he was at his lowest point.

So passionate about the lifesaving difference it makes, Al actually decided to train to be a volunteer himself so that he could use his lived experience to help other people. Now he offers up his time to be a Crisis Support Worker several days a week.

Another volunteer Vivien Isaac Curson is a clinical adviser to the charity. A former Psychiatric Nurse Manager and Co-Clinical Lead of an NHS Psychological Therapies Service, she spent 31 years working in the NHS.

‘Individual crisis can affect a person’s ability to respond to any intervention,’ she explains. ‘Intense distress or a profound sense of hopelessness can overwhelm them. So, whatever support is offered, by whichever service, a key strength is spending sufficient time with the person to really understand what is needed, and to remain with them until the crisis has passed.

‘We must never lose sight of the fact that every life counts dearly, and this charity holds this value at its heart.’

On the day David came in, he explained to us that he had been unable to see his children since his marriage broke up a few weeks earlier. It meant that Christmas and New Year felt acutely painful for him. For anyone who has experienced a loss, whether through bereavement, relationship breakup or restricted access to their children, this can be a particularly distressing time of year.

However, the charity doesn’t just provide a place that people can come to – they also offer home visits to those in need.

‘Not everyone will be able to reach our centre when they are in crisis. We have to go out to them, if they can’t get to us,’ explains Al. ‘We travel all over our region, going out to people in isolated villages as well as in city centres.’

Indeed, during David’s visit, the Crisis Centre phone line rang and a young woman told us she was having thoughts of ending her life. The team assessed her risk of suicide, and it was clear that someone needed to go out to see her immediately.

It was Al and a colleague, Daisy*, who decided to go, and as they drove, kept the woman talking, comforting and reassuring her that they would be with her very soon.

When they arrived at her house, Al waited in the car as Daisy went in to see the young woman.

‘Part of my role is to be there for my colleagues – to be someone they can talk to, especially if the visit has been distressing or harrowing for them,’ he explains, adding that although the team has trained specialists to support them, the immediate help of a colleague who knows them well is invaluable.

Daisy soon learned that the young woman had no food in the home – and no heating, so she and Al decided to drive to the nearest supermarket to buy essential food supplies for her.

Aware of the impact the cost-of-living crisis is having on people up and down the UK, the team already had a supply of electric heated blankets in the car to give out to clients who need them.

‘We’re used to witnessing emotional suffering and this is always hard – but we have not witnessed so much physical suffering before,’ explains Al.

‘We need to be able to provide practical help now – food and warmth – as well as crisis support.’

When the pair returned to the women’s home with supplies, she explained to him that she lost her mum recently. She was already struggling with her mental health when her mother died, and now she was experiencing severe financial difficulties, too. Before they left, Al and Daisy made sure she had the emergency phone number for the centre and reassured her someone would be back to visit the next day.

Their next destination was further out in the Gloucestershire countryside, seeing a woman who they have been in contact with for a few weeks. It’s a steep and precarious drive to her home, but Al is an experienced driver. He was a postman for many years, and is used to getting out and about in the most challenging conditions.

As they arrived, two dogs came out to greet them, then the front door was opened by a woman in pyjamas. Once inside, a cat joined their meeting and sat on Daisy’s lap, which made the woman smile.

The story behind Suicide Crisis

Joy Hibbins set up the charity following her own suicidal crisis in 2012.

After being placed under the care of a psychiatric crisis team in the community, and ultimately sectioned in a psychiatric hospital, Joy’s experience left her believing that a new approach and ethos for people experiencing a suicidal crisis was needed.

In 2013, she went on to create the Suicide Crisis Centre, an ‘alternative place’ for those in need, with the aim of being full of light and warmth, with a highly qualified, trained team who radiated kindness, empathy and care.

Al recalls how she was doing a lot better than she was a few weeks ago, and is able to start tentatively looking ahead to the future. She hopes to train to be a social worker – which I’ve found isn’t unusual for a person in her position. When you have experienced the acute pain of a suicidal crisis, it can often give you a greater empathy for other people’s distress and a strong desire to help alleviate their suffering.

Gerry is one of the qualified counsellors who has been a volunteer at the centre for a decade.

He explains that many of the clients he supports have experienced traumatic events, either recent or historic. It can be extremely harrowing work at times, he adds.

Fellow volunteer counsellor Caroline has worked with the charity for the last five years.

‘I’ve always felt a deep empathy for people going through difficult times. Over the last 10 years or so, I’ve been lucky enough to both volunteer and work for some wonderful mental health charities and when I read about the Suicide Crisis Centre, I felt that I really wanted to become involved,’ she explains.

‘Being a volunteer enables me to be there for a person in the moment that they need someone the most, which is such a very special privilege.’

Al agrees, adding, ‘People often ask us if it’s depressing working here, but it’s the opposite. It’s a place that’s full of hope, because we believe all our clients can survive. And it’s a place of caring and kindness and human warmth. I remember when I was a client 10 years ago. My counsellor had a warmth that filled the room. I felt safe and cared for.

‘Lived experience is at the heart of all this,’ he goes on. ‘It’s very obvious that this centre was set up by someone with lived experience of being in suicidal crisis. It’s really important to have a skilled, trained team but it’s about more than that. This is a place that cares about everyone who comes here.’

Although it is Christmas time, the centre is filled with spring flowering plants – hyacinths and irises and crocuses – rather than festive decorations. Spring flowers, the team believe, focus clients’ attention on the new season that is coming, rather than on festivities and winter.

At the end of each shift, Al makes a point of hugging his colleagues before leaving for home. After all, he says, this is a team that cares about each other, as well as everyone they support.

However, what Al perhaps doesn’t quite realise is just how much he embodies the hope the centre offers, as he – and the many others who work alongside him – is  a living example of the possibility of recovery from crisis.

*Name has been changed

All client stories included with their consent.